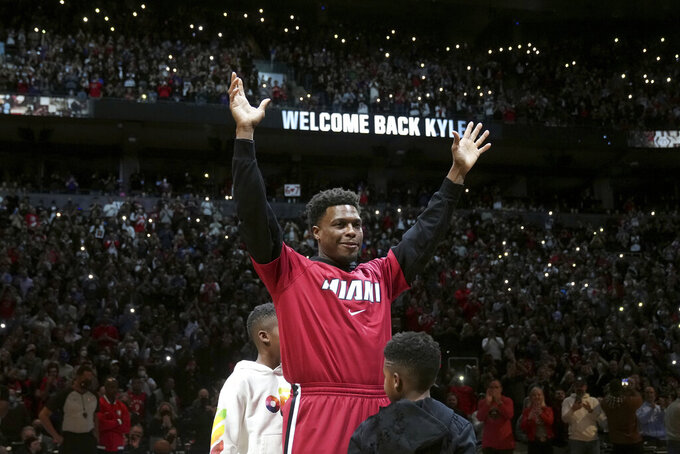 The six-time All-Star guard returned to Toronto for the first time in more than two years, his first trip back north of the border since an offseason trade to the Miami Heat.

“I missed everything about the city, the country, the organization,” Lowry said in a pregame press conference. “It’s a lot to miss.”

“It’s a place I called home for a long time,” Lowry said of his emotions about returning to his old arena. “I won a lot of basketball games here, set a lot of records here. I’ve got a banner hanging up in there. It’s just a special place.

After a video tribute spanning his Raptors career, Lowry was introduced as a visitor the same way he once was as a local star, with the words “From North Philly to your city…”

With a full house of cheering fans on their feet, Lowry led his two young sons to center court, holding his hands aloft in gratitude but managing to contain his emotions. He’d previously suggested he might cry but pledged before the game to try and hold it in.

“I know if I cry, DeMar’s going to make fun of me and it’s going to go viral and all that stuff,” Lowry said, referring to longtime teammate DeMar DeRozan. “I’m looking forward to just being in the moment.”

Lowry last played in Toronto on Feb. 28, 2020, when the defending champion Raptors lost to Charlotte.

“I’m going to be honest, I don’t even remember who we played,” Lowry said.

Less than two weeks later, the NBA season was shut down by the pandemic, eventually resuming at Walt Disney World, where Toronto’s title defense ended in a seven-game loss to Boston in the second round.

With the Canadian border still closed by COVID-19, the Raptors were forced to relocate to Tampa, Florida for Lowry’s final season with the team in 2020-21, depriving Toronto fans of a proper goodbye.

Struggling to win in their temporary home after the team was hit by a coronavirus outbreak, Toronto nearly traded Lowry at the deadline last season. Instead, they moved him to Miami in the summer, landing guard Goran Dragic and forward Precious Achiuwa in exchange.

“It was just time,” Lowry said of his amicable Toronto exit. “It was like naturally a good phase out. It was time for the next phase.”

Lowry found the perfect accessory for the stylish blue suit he wore to his pregame press conference: his massive, diamond-studded ring from Toronto’s 2019 championship.

“It’s special to me and the city, and the country, and the organization, so why not wear it?” Lowry said.

Earlier, Toronto Mayor John Tory officially proclaimed Sunday “Kyle Lowry Day” in the city to mark the star guard’s return. In a video posted to Twitter, the mayor praised Lowry for both his play and his off-court charitable work.

“We love him, we will always love him,” Tory said.

Lowry didn’t play between Jan. 15 and Feb. 3 because of personal reasons, missing all three previous meetings between the Heat and Raptors. Those games included Miami’s Feb. 1 visit to Toronto, which was played before just a few hundred fans because of Ontario government restrictions related to the COVID-19 pandemic. Those restrictions have since been lifted, and a large crowd arrived early to welcome Lowry back to Toronto, cheering when he came out for warmups.

While Raptors fans were delighted to see Lowry back in town, coach Nick Nurse wasn’t laying out the welcome mat for his former star.

“I hope to God we ruin his night,” Nurse joked.

Lowry insisted he was up to meeting Nurse's challenge.

“As a competitor, I know the competitiveness is going to come out, so I’m going to try to win it,” he said, “but I’m going to enjoy this moment and enjoy being here.”

With Heat coach Erik Spoelstra entering the health and safety protocols Sunday., assistant Chris Quinn led the Heat in Lowry’s emotional return. Quinn said Lowry has made a big impact on Miami since his arrival.

“A guy with his stature, his leadership qualities, he’s brought our team to another level,” Quinn said. “We certainly enjoy being around him and learning from him.”