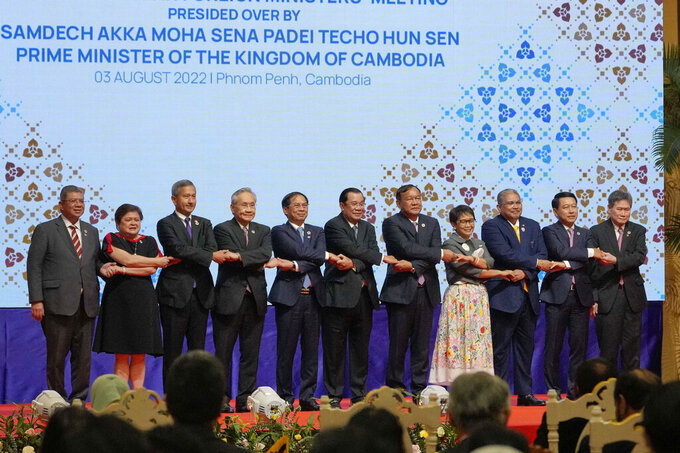 It is the first in-person meeting of the Association of Southeast Asian Nations foreign ministers since the outbreak of the COVID-19 pandemic, which has weakened economies and complicated diplomacy, and comes at a time of increased tensions between the United States and China, as well as global increases in food and energy prices following Russia's invasion of Ukraine.

“ASEAN has to deal with challenges of different types and levels but never before, never like this year, have we been confronted at the same time with so many perils for the region and the world at large,” Cambodian Foreign Minister Prak Sokhonn told the delegates ahead of the meetings.

Myanmar's military ousted the democratically elected government of Aung San Suu Kyi in February 2021, and the country was asked not to send any political representative to the ASEAN meetings in response to the violence that has ensued.

In protest of that decision, Myanmar's military government said it would send no delegate at all, so is unrepresented in the talks, complicating efforts to push the country to comply with an ASEAN five-point plan for peace, which it has largely been ignoring.

“You're trying to solve the problem in Myanmar without talking to them,” conceded Cambodia's spokesperson for the meetings, Kung Phoak, a Foreign Ministry official who also serves as the group's special envoy to Myanmar.

“We are trying to talk to them, trying to explain to them, trying to express our frustration," he said. "But at the same time we also want to hear from them, what they think, how they can do more, so that we can make sure that the implementation of the five-point consensus is moving forward as fast as possible.”

Suu Kyi’s ouster triggered widespread peaceful protests that were violently suppressed. They have evolved into an armed resistance and the country has slipped into what some U.N. experts characterize as a civil war.

Among other things, the five-point consensus calls for dialogue between all concerned parties and an immediate end to violence.

The military-led government has shown little interest in following the plan, however, and last week announced that it had resumed judicial executions, hanging four political prisoners. That prompted a global outcry, including from ASEAN countries, with Malaysian Foreign Minister Saifuddin Abdullah condemning the act as a “crime against humanity.”

New sanctions are being considered and Saifuddin said ahead of the meetings that the group should think about scrapping or revising its five-point consensus. He said ASEAN’s special envoy also needs to meet with the National Unity Government, a shadow civilian administration established outside Myanmar, to help develop a new political framework.

In his opening remarks, however, Cambodian Prime Minister Hun Sen seemed to suggest a slower approach, saying that member states were “deeply disappointed and disturbed by the execution of those opposition activists,” but going on to say “if more prisoners are to be executed we will be forced to rethink our role vis-a-vis ASEAN's five-point consensus.”

In a draft copy of the final communique, which was obtained by The Associated Press and could change by the end of the meetings, the ministers say they remain committed to “accelerate the implementation of the five-point consensus” and again “called for the immediate cessation of violence.”

More than 2,100 people have been killed by the military government since it took power and nearly 15,000 have been arrested, according to the Assistance Association for Political Prisoners, a non-governmental organization that tracks killings and arrests.

Following the day's meetings, Saifuddin said he had brought up proposals on strengthening the implementation of the five-point consensus and including talks with opposition groups, but that the future of the plan would have to be decided later in the year when ASEAN leaders hold their summit.

“The five-point consensus was decided by the leaders of ASEAN and only the leaders can decide what we do,” he told reporters.

The foreign ministers of China and Russia, both of which have supported Myanmar's military regime, will be attending the ASEAN meetings and could be pressed by the group for assistance in implementing the plan. China, however, has strongly stuck by a principal of non-intervention while Russia is Myanmar's top arms supplier.

During a stop in Myanmar en route to Phnom Penh, Russian Foreign Minister Sergey Lavrov showed no sign of any change to Moscow's stance, saying the two countries “have a very solid foundation for building up cooperation in a wide range of areas.”

“We appreciate the traditionally friendly nature of our partnership, which is not affected by any opportunistic processes,” Lavrov said.

U.S. Secretary of State Antony Blinken, who has criticized ASEAN for not doing enough to stop the violence in Myanmar, will also be in attendance in Phnom Penh.

There are currently no plans for Blinken to meet one-on-one with either Wang or Lavrov, but all three major powers are expected to take part Friday in an expanded meeting called the East Asia Summit. They are also to attend the ASEAN Regional Forum, a platform for security talks where North Korea is also a member.

That could be the first time Blinken and his Chinese counterpart, Wang Yi, would meet in the wake of House Speaker Nancy Pelosi’s visit to Taiwan, which provoked an angry response and threats from China, and might coincide with Chinese military exercises around the island.

Combined efforts to help the region in the wake of the coronavirus pandemic's devastating impacts on tourism and other industries is another issue the ASEAN ministers set out to tackle, as well as ongoing territorial disputes in the South China Sea.

In 2016, an arbitration tribunal set up in The Hague under the U.N. Convention on the Law of the Sea invalidated Beijing's vast territorial claims after the Philippine government complained in 2013 about China’s increasingly aggressive actions in the disputed waters.

China did not participate in the arbitration, rejected its ruling as a sham and continues to defy it.

In addition to China and the Philippines, Vietnam, Malaysia, Taiwan and Brunei have had overlapping claims in the busy waterway, where an estimated $5 trillion in goods passes each year and which is believed to be rich in undersea gas and oil deposits.

In the draft final communique, the group says concerns remained “on the land reclamations, activities, and serious incidents in the area, which have eroded trust and confidence, increased tensions, and may undermine peace, security, and stability in the region.”

At the same time, they “welcomed the continuously improving cooperation between ASEAN and China” and said they were “encouraged by the positive progress of the substantive negotiations” toward agreement on a code of conduct in the South China Sea.

Jim Gomez in Manila, Philippines, contributed to this report.