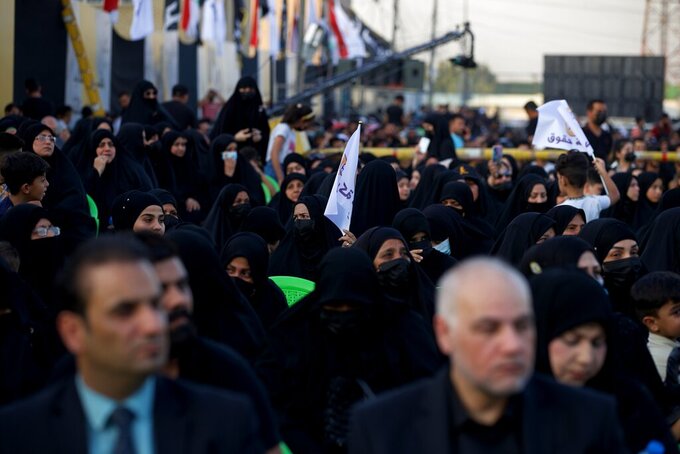 Hadi Mizban, ASSOCIATED PRESS
Supporters of a political movement called "Harakat Huqooq, Arabic for Rights Movement, listen to Hussein Muanis during an election rally in Baghdad, Iraq, Friday, Sept. 3, 2021. Muanis is the leader of Kataeb Hezbollah, one of the most hard-line and powerful militias with close ties to Iran, who once battled U.S. troops. He is the first to be openly affiliated with Kataeb Hezbollah or Hezbollah Brigades, signaling the militant group’s formal entry into politics. (AP Photo/Hadi Mizban)

BAGHDAD (AP) — Among the candidates running in Iraq’s general elections this week is a leader in one of the country's most hard-line and powerful militias with close ties to Iran who once battled U.S. troops.

Hussein Muanis joins a long list of candidates from among Iran-backed Shiite factions vying for parliament seats. But he is the first to be openly affiliated with Kataib Hezbollah, or Hezbollah Brigades, signaling the militant group’s formal entry into politics.

The group is on a U.S. list of terrorist organizations and is accused by U.S. officials of targeting American forces in Iraq. Muanis himself was jailed by the Americans for four years from 2008 to 2012 for fighting U.S. troops.

“Our entrance into politics is a religious obligation. I battled the occupiers militarily and now I will battle them politically,” he said, speaking to The Associated Press recently in his office in central Baghdad.

Muanis, 50, says he has given up his militia fatigues in favor of politics. He now heads a political movement called “Harakat Huqooq,” or Rights Movement, which is fielding 32 candidates and an electoral program stressing the departure of U.S. troops from Iraq.

The Kataib Hezbollah group has been struck by U.S. forces near the Iraq-Syria border several times. In December 2019, the U.S. carried out strikes targeting military sites belonging to the group after blaming it for a rocket barrage that killed a U.S. defense contractor at a military compound near Kirkuk in northern Iraq. Around 20 militiamen were killed.

Iraq is holding elections on Oct. 10, the fifth parliamentary vote since the U.S.-led invasion that ousted dictator Saddam Hussein in 2003, which shifted the country’s power base from minority Arab Sunnis to majority Shiites. The vote was brought forward by one year in response to mass protests that broke out in late 2019 over endemic corruption, poor services and unemployment.

While a new electoral law has allowed more independents to run, Shiite groups continue to dominate the electoral landscape with a tight race expected between pro-Iran parties and their militias — the largest of which is the Fatah alliance — and the political bloc of Shiite nationalist heavyweight Moqtada al-Sadr, the biggest winner in the 2018 elections.

The Fatah alliance includes leaders associated with the paramilitary Popular Mobilization Units, an umbrella group for mostly pro-Iran state-sanctioned militias, including Kataib Hezbollah. But the group has lost some popularity following the 2019 protests, with activists accusing hard-line armed factions of brutally suppressing protesters by using live ammunition and tear gas to disperse crowds.

Protesters demanding change and reform were also often railing against Iran’s heavy-handed interferences in Iraqi politics. More than 600 were killed and thousands injured during the months-long protests.

Analysts say the entry of Kataib Hezbollah — the group is separate from the Lebanese group of the same name — might be an attempt by Iran to strengthen its allies inside Iraq’s parliament.

Bassam al-Qazwini, a Baghdad-based political analyst, said after the 2019 protest movement Iran pushed for hard-liners to go into politics.

“Harakat Huqooq opens the door for hard-line factions to enter the realm of politics and the parliament building,” he said, adding that he did not expect them to win a lot of seats.

Muanis, a slender man who sports a light beard, said his reasons for entering politics is the people’s disappointment with the current political situation and politicians' failure to implement reform.

“So we are participating in order to bring about change,” he said. If he wins, he says he will work from inside parliament on “regaining Iraqi sovereignty by having the occupier leave,” he said of the Americans.

Asked about the proliferation of arms outside state control, he said: “Whenever the occupation is no longer there then we can discuss it. Then there would be no need to bear arms.”