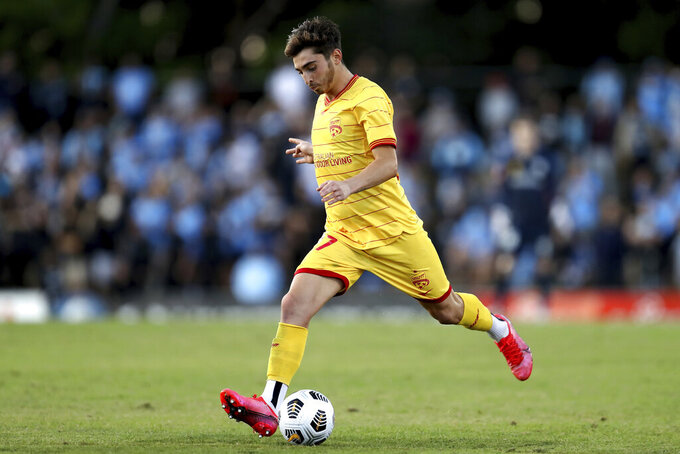 Brendon Thorne, ASSOCIATED PRESS
Josh Cavallo of the Adelaide United controls the ball during an A-League match between Sydney FC and Adelaide United in Sydney, on April 18, 2021. Cavallo came out in a series of social media posts and made comments about his experience in a video released Wednesday, Oct. 27, 2021, by his A-League club. Cavallo says he's the first active male player in the A-League to come out as gay. (Brendon Thorne/AAP Image via AP)

Josh Cavallo recorded the statement that he'd been too concerned to talk about publicly for a very long time.

“There's something personal that I need to share with everyone: I'm a footballer, and I am gay,” Cavallo said in a video published Wednesday by Adelaide United, his A-League club.

The 21-year-old Cavallo said he's the first player to come out while still playing in Australia's top-flight men's soccer competition. It's a rarity across the globe in men's sport, something Cavallo wants to change.

The video, which the club posted along with the message “Josh's truth,” made instant headlines in Australia and his own post and the club's version were widely shared.

Cavallo said growing up, he'd felt the need to hide himself. Not any more.

“I was ashamed I'd never be able to do what I love, and be gay,” he said. “All I want to do is play football and be treated equally. I'm tired of trying to perform at the best of your ability and to live this double life. It's exhausting. It's something that I don't want anyone to experience.”

“But that's not the case,” he said. "If anything, you earn more respect from people. Coming out to my loved ones, my peers, my friends, my teammates, my coaches has been incredible.

“The response and support I have received is immense — it's starting to make me think, ‘Why have I been hiding this burden for so long?’”

Monash University researcher Erik Denison, who has conducted international research on athletes coming out in sport, said he hoped Cavallo’s public announcement would be a catalyst in the sport.

“Unfortunately, it is very rare for male players to come out to their teammates in both professional and amateur sport,” Denison said, noting that Cavallo is only the fourth Australian man to come out while playing sport at the elite level. “I am glad to see Football Australia has publicly supported Cavallo, but it now needs to fulfil the public commitments it made in 2014 to ‘eradicate’ homophobia from the sport with meaningful action.”

The A-League season is scheduled to kick off on Nov. 19, with Cavallo's Adelaide United opening against Perth Glory the following day.

Cavallo chose to make his statement ahead of the season in a bid to "inspire and show people that it’s okay to be yourself and play football.”

In an interview with Australia's 10 television network, Cavallo said it was on a night that was meant for celebrations at the end of last season, when he'd received an award, that prompted him to go public.

“There was lots of positivity happening in my life. But when I got home, I just felt numb. I had no emotions,” he said. "My life was great, but it wasn’t a life where I got to be my authentic self.

“Instead of celebrating, I sat in my bed crying that night. Having to constantly lie to the people I cared about wasn’t the way I wanted to live the rest of my life. My double life started to have a huge influence on my mental health. Although the football was amazing, I still wasn’t happy.”

After lots of reflection and some inspiration from the stories of other former players, he's fine now.

“I want to show all the other people that are struggling and are scared, whoever it may be, don't act like someone else," he said in the video. "You were meant to be yourself, not someone else.”

Cavallo received of support at home and abroad, with most praising his honesty and bravery.

Among them were French international Antoine Griezmann, who shared Cavallo's post with the message “proud of you,” and Barcelona star Gerard Piqué, who responded to Cavallo's news in a post to his 20 million-plus Twitter followers.

“Hey @JoshuaCavallo, I don’t have the pleasure to know you personally but I want to thank you for this step that you take," he wrote. "The world of football is far behind and you are helping us move forward.”

Australian Senator Penny Wong said any person who was struggling with their identity “can look today to Josh Cavallo.”

To amplify his message, Cavallo concluded his video, recorded in the safe surroundings of his Adelaide home, with his matter-of-fact statement: “I'm Josh Cavallo, I'm a footballer, and I'm proud to be gay.”