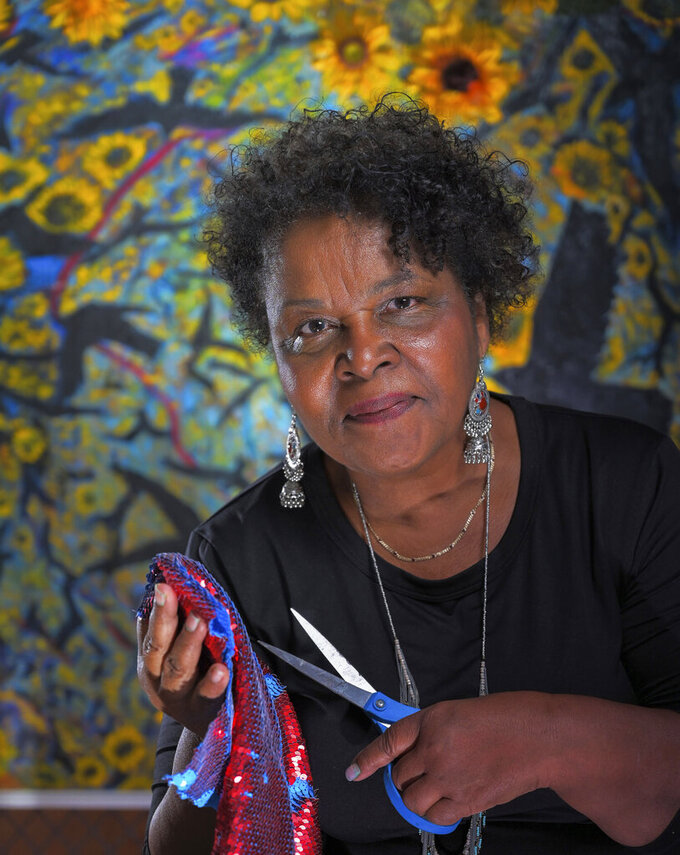 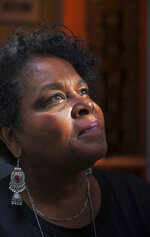 BALTIMORE (AP) — At the historic Lexington Market in Baltimore, an enslaved man named Robert once sold butter to local customers.

Robert, who had no recorded last name, is one of two subjects at the heart of “Robert and Rosetta,” a sculpture designed by artist Oletha DeVane, 70, and her son, Christopher Kojzar, 40.

The sculpture, crafted of steel and stainless steel by blacksmith Nicholas Ireys at his shop about a mile from Lexington Market, captures the history of slavery at the market while reflecting the ornamental ironwork dotted around Baltimore. It is being installed in the plaza of the newly reopened Lexington Market, located in the BROMO Arts District.

DeVane, who lived in Baltimore until she was 13 and now lives in Ellicott City, said she was interested in the stories of Robert and Rosetta because she likes to look at “where the African American presence is and was, and especially during that time.” The origins of Lexington Market can be traced back to 1782.

Dean Krimmel, a public historian and Baltimore-based museum consultant, worked with the redevelopment project and provided DeVane and Kojzar with documentation about Robert and Rosetta.

Krimmel gleaned the information on Robert from a runaway notice that ran at least five times in The Baltimore American & Commercial Daily Advertiser in July 1833. A $50 reward was offered for Robert’s capture.

Rosetta was an enslaved girl with no recorded last name who was auctioned off at the market. The advertisement for her sale was posted in The Baltimore Sun in March 1838.

The ads, the only information available on Robert and Rosetta, are engraved in granite flagstones as part of the sculpture.

“This is really just to have some reflection on where we’ve been, where we come from,” Devane said. “For me, these two people who were ordinary people trying to ... live their lives in some way, in some fashion, within the construct of that social system was very important to kind of explore.”

The Robert and Rosetta panels are attached to light posts with “pretty filigree” at the top, which DeVane said represents growth and change. The posts form an archway, which allows visitors to pass through the space after encountering the flagstone markers.

DeVane and Kojzar tapped Ireys to do the metalwork for the project because they wanted a more “historic” and “timeless” feel, Ireys said.

“Even though I’m not one of the main designers, I was able to put a lot of myself into this piece, which was a very rewarding process for me,” Ireys said.

Kojzar said acknowledging Black history through everyday people is a thread in both his and his mother’s work. Kojzar is currently doing a fellowship and teaching at the University of Vermont.

Earlier this year, DeVane produced a sculpture for the McDonogh School in Owings Mills as part of a larger tribute to the 200 men, women and children that were enslaved by the school’s founder, John McDonogh, at the time of his death in 1850. DeVane formerly taught at McDonogh.

Kojzar said as part of the McDonogh piece, DeVane had to design imagery of individuals who represented “something so much larger than the short narrative that was presented about their lives.”

The same applies to Robert and Rosetta, he said.

Katie Marshall with Lexington Market developer Seawall led the public art component of the market’s redevelopment. She said merchants, customers and community members asked about connections between the market and slavery.

“I think (their) piece is a beautiful tribute to those two individuals, and also an acknowledgment of all the various ways that enslaved persons interacted with the market and in Baltimore City as a whole,” Marshall said.

Ireys said it’s rare for an organization to embrace its “very checkered past” so openly.

“I’ve never worked on a project that was so directly representing difficult social aspects that directly related to the organization paying for the piece,” Ireys said.

DeVane has loved art since she watched her father paint in the dining room. A graduate of the Maryland Institute College of Art and the University of Massachusetts, she is a multidisciplinary artist whose exhibits have been in museums such as the Reginald F. Lewis Museum in Baltimore and the Art Museum of the Americas and the now-closed Corcoran Gallery of Art in D.C. She previously served as the program director of the Maryland State Arts Council’s Individual Artists and Visual Arts programs.

DeVane’s body of work from the 1980s through 2022 is currently on display at the Center for Art, Design and Visual Culture at the University of Maryland, Baltimore County. The exhibit, “Oletha DeVane: Spectrum of Light and Spirit,” features paintings, works on paper, video and interactive sculpture, such as a piece visitors can add beads to.

In addition to “Robert and Rosetta,” the new market will feature “Food Play” by artists Ireys, Reed Bmore and Eric Smith and “Corned Beef and Flavored Water” by SHAN Wallace. Four 16-foot murals that line the new plaza were designed by Ernest Shaw, Jr., who has painted a number of murals throughout Baltimore.

“(Oletha DeVane) is such an incredibly important and well-respected artist in the Baltimore community, the Baltimore art community, and beyond,” Marshall said. “It just felt really right to have her be one of the primary artists working on pieces for the new market.”