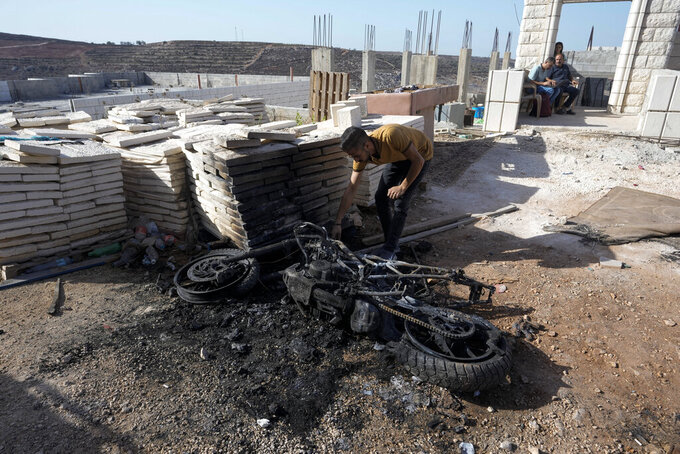 Majdi Mohammed, ASSOCIATED PRESS
A Palestinian man points at a motorcycle in the northern West Bank, Sunday, Sept. 25, 2022. Israeli soldiers shot and killed a suspected Palestinian gunman during an arrest raid overnight in the northern West Bank, according to Israeli and Palestinian reports. The army said it spotted a group of armed men traveling in a car and on a motorcycle during an operation near the city of Nablus and opened fire. (AP Photo/Majdi Mohammed)

BEIT IJZA, West Bank (AP) — Relatives pushed back Sunday against Israeli claims that a Palestinian teacher intentionally rammed an Israeli police car before he was shot dead by security forces.

The family of 36-year-old Mohammed Abu Kafieh said he had no possible reason to carry out an attack, noting that he was a father of three and had just opened a new business. His relatives said they believe he accidentally crashed into a police car Saturday before troops opened fire.

“He is not the kind of man that commits attacks,” said Abu Kafieh’s cousin, Mohammed Nimer.

The army has said soldiers spotted a car attempting to ram them and then shot Abu Kafieh.

Photos of the incident published online by Palestinian media show an Israeli police car and another vehicle, both with smashed front ends.

Palestinian assailants have carried out dozens of attempted stabbings and car rammings in recent years. Palestinians and human rights groups say that Israeli troops often use excessive force, and in some cases, have shot people who did not pose a threat.

The incident took place near the city of Nablus in the northern West Bank — the focal point of the deadliest Israeli-Palestinian violence in the occupied territory since 2015.

While mourning together in the village of Beit Ijza near Jerusalem, family members told The Associated Press that Abu Kafieh was a loving father and well-liked in the community. He mentored students and had invited the community to an opening ceremony for a new business venture selling mobile phones and accessories.

He was on the road to Nablus to buy supplies for the opening of his shop when he was shot, his family said.

“The opening ceremony was today, he invited everybody,” Abu Kafieh’s sister Nuha said through tears while standing next to one of his three kids. “With God as my witness, he was not going to commit an attack or anything, he was looking out for his livelihood and the livelihood of his children.”

Dozens of people at the gathering of mourners paid respects beneath banners of Palestinian President Mahmoud Abbas’ Fatah party. Another poster was a collage of Abu Kafieh alongside Abbas’ predecessor, the late Palestinian leader Yasser Arafat, a key Islamic shrine as well as a Fatah-linked gunman recently killed in an Israeli raid in Nablus.

It was not immediately clear what Abu Kafieh’s relationship to Fatah or its armed offshoot was, if any. At times, factions lay claim to Palestinians killed by Israel during the mourning period.

Nimer said the family is awaiting the return of the body from the army and hopes to be able to view footage from surveillance cameras from the area of the incident.

The army did not immediately respond to questions Sunday about the body but said that there was no surveillance video.

The Palestinian Foreign Ministry alleged that Israeli forces had engaged in a “criminal execution.”

Israeli troops have stepped up operations in the northern West Bank since a series of deadly Palestinian attacks inside Israel in the spring. Several attackers came from the area.

Dozens of Palestinians have been killed, making 2022 the deadliest year in the occupied territory since 2015. Most of the Palestinians killed have been wanted militants or young men and teenagers who throw stones or firebombs at soldiers invading their towns.

But some civilians, including an Al Jazeera journalist and a lawyer who inadvertently drove into a battle zone, have also been killed in the violence.

In another incident, Israeli soldiers shot and killed a suspected Palestinian gunman during an arrest raid overnight in the northern West Bank, according to Israeli and Palestinian reports.

The army said it spotted a group of armed men traveling in a car and on a motorcycle during an operation near the city of Nablus and opened fire. The Den of Lions, a local militant group, said one of its members, Sayid al-Kuni, was killed in a “clash with the occupation forces.”