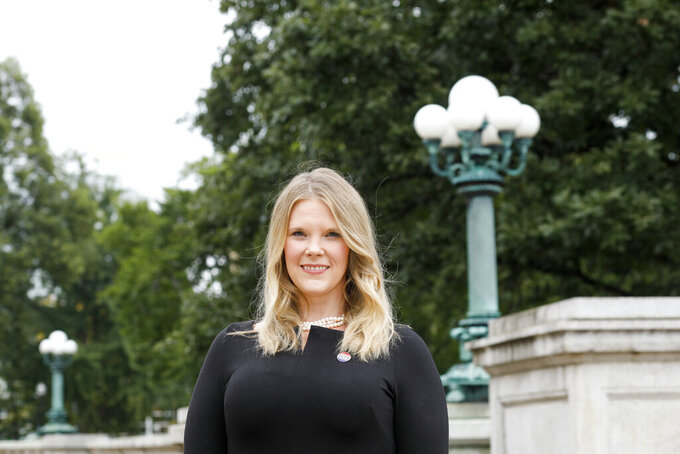 Ruthie Hauge, ASSOCIATED PRESS
Wisconsin Elections Commission Administrator, Meagan Wolfe, poses for a picture outside of the Wisconsin State Capitol Building, on Monday, Aug. 31, 2020. When efforts to overturn Trump's loss in Wisconsin failed through lawsuits and recounts, Republicans repositioned their attacks to the commission and Wolfe. At least 10 Republican lawmakers have called for the resignations of her or one or more commissioners. (Ruthie Hauge/Wisconsin State Journal via AP)

MADISON, Wis. (AP) — The Republican-hired attorney investigating the 2020 election told Wisconsin lawmakers during a testy hearing Wednesday he has filed a lawsuit to force officials in Green Bay and Madison to provide testimony.

Meanwhile, the state's embattled elections commission approved a series of recommendations made in a recent nonpartisan audit, while also pushing back against the report by saying it was rife with mistakes and led people to wrongly conclude elections are poorly managed.

“Those are either complete gross incompetence or an attempt to intentionally sabotage the work of the commission,” Democratic commissioner Ann Jacobs said of the audit.

The simultaneous meetings come as Republicans in Wisconsin are increasing the pressure on election officials. Lawmakers have called for the resignation of the state's nonpartisan top election administrator and a sheriff who supports Donald Trump called for prosecuting five of the commission's six members.

President Joe Biden beat Trump by nearly 21,000 votes, an outcome that has withstood recounts and lawsuits. False claims of widespread fraud have not been proven, with just five people out of more than 3 million who cast ballots in 2020 charged with election fraud.

Gableman said he filed lawsuits Monday seeking to force Green Bay Mayor Eric Genrich and Madison Mayor Satya Rhodes-Conway to submit to depositions because they have “simply failed without reason or excuse to appear.”

Online court records did not list the lawsuits. Madison City Attorney Michael Haas said he hasn’t heard anything about such a lawsuit. Rhodes-Conway issued a statement saying Gableman’s investigation is really just a “temper tantrum” by people who didn’t like the election results.

Amaad Rivera-Wagner, Genrich's chief-of-staff, issued a statement saying the city has already provided Gableman with almost 20,000 pages of records and no one has heard anything about his lawsuit.

Gableman pushed back against Democrats’ criticisms that the probe has been too secretive. For the first time, he named nearly everyone working for him and their salaries. That included Ron Heuer, president of the Wisconsin Voters Alliance, which brought two failed lawsuits seeking to overturn the presidential election results; lawyer Andrew Kloster, a former Trump administration official who has stated the election was stolen; and two retired Milwaukee police detectives.

Gableman said so far he has spent about $175,000 of the $675,000 in taxpayer funds that Assembly Republicans authorized for the investigation in August. He also promised to publicly release documents by Friday that won’t “compromise” the investigation.

The former justice got into shouting matches with Democratic Reps. Mark Spritzer and Jodi Emerson, accusing them of ignoring his invitations to meet with him.

Spreitzer questioned Gableman's impartiality and accused him of hiring conservatives looking to remove Biden from office.

“Stop making things up, Mark,” Gableman cut him off. “Your constituents deserve better. Shame on you.”

“Shame on you!” Spreitzer fired back.

The state elections commission agreed on bipartisan votes to approve many of the 30 recommendations made in a nonpartisan audit released last month. The commission voted unanimously to move forward with the process of issuing a rule, which has the force of law, on regulating ballot drop boxes and whether local elections clerks can fill in missing witness address information on absentee ballot envelopes.

However, commissioners will have to vote later about what the rules will actually allow, like how many drop boxes are permitted and where. And any proposal must also win approval from the Democratic governor and a Republican-controlled legislative committee.

Trump had argued in his failed lawsuit that ballots where clerks filled in missing information — which had been allowed under commission guidance since 2016 — should not be counted.

The Audit Bureau didn't allow the commission to submit a response that is included when the report is released, a step routinely done for other audits.

“They actually acted in an unprofessional manner in this case,” Republican Commissioner Dean Knudson said of the bureau. “That’s disappointing.”

Some Republicans have pointed to the audit as evidence that Wisconsin elections were secure because it didn't find any widespread fraud or abuse. Others contend it shows that the commission willfully broke the law during the coronavirus pandemic in 2020.