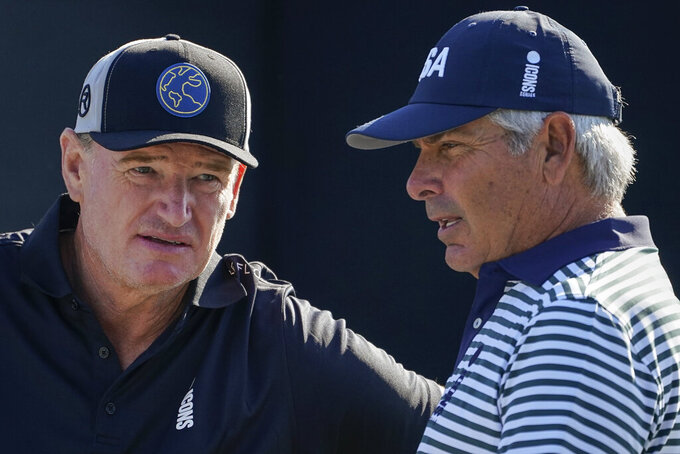 The theme of the Saudi-funded LIV Golf series is, “Golf, But Louder.”

Money talks, loud enough for Dustin Johnson to get an offer he couldn't ignore, for Brooks Koepka to do an about-face within a week, for Pat Perez to be smiling after shooting 80.

Inflated signing fees from Saudi Arabia's sovereign wealth fund were always going to attract criticism. Now an additional layer of noise is starting to surface, mainly because some of these players decided to take the money and run their mouths.

Talor Gooch got more attention for his words than anything he ever did on the golf course. For those unfamiliar with Gooch, he won his first PGA Tour title in the final tournament of 2021 against a field that had no one from the top 10 in the world on the weekend. He has played seven majors in his eight years as a pro.

When asked during the inaugural LIV event outside London whether it was fair to be criticized for contributing to “sportswashing,” Gooch replied: “I'm a golfer. I'm not that smart.”

And then he proved it last week at Pumpkin Ridge when his team (4 Aces) won by seven shots, each member paid $750,000. Gooch was asked if he could feel the energy from the crowd.

“I haven’t played a Ryder Cup or Presidents Cup, but I can’t imagine there’s a whole hell of a lot of difference,” Gooch said. ”This was as cool as it gets."

As cool as it will ever get for him, no doubt.

The comment was absurd, even by Gooch's standards. This was the player who posted a “You're Welcome” gif when the PGA Tour reacted to LIV by announcing changes to its schedule geared around bigger purses for top players.

No doubt, the new league is a disruption, and that's not all bad.

Changes announced two weeks ago will make the PGA Tour leaner and better without losing the ideal that “play better” still rules the day. Chief among them is getting back to a calendar year (January through August) with an offseason that offers something for everyone, or nothing at all if someone wants a clean break.

The money was always going to increase with a new media rights deal, now channeled more to the players who made media want to invest in golf.

But this disruption also has drawn a line between who wants to be rich and who wants to be a star, and they are not necessarily connected. There is growing animosity from the latter who would like the former to be a little more transparent.

“I understand that they’re being fed everything on what to say and all this stuff, but for them to say that it's all for the betterment of the game ... to be perfectly honest, I just wish one of them would have the balls to say I’m doing this for the money,” PGA champion Justin Thomas said on the No Laying Up podcast. "I personally would gain a lot more respect for that.

“But it’s just the more the players keep talking and saying that this is for the betterment of the game, the more agitated and irritated I get about it.”

Patrick Reed took a parting shot at the PGA Tour by saying it never listened to players. He talked about the appeal of LIV Golf being able to spend more time with his family by having fewer events to play. And by the weekend, he was trying to figure out how to add the Scottish Open to his schedule.

Wasn't the idea to play less?

Reed plays some 30 times a year and leaves out the part where it's his choice. Being an independent contractor doesn't mean setting your own rules, it's about setting your own schedule (which Reed can no longer do as a LIV employee). He didn't have to play five times after the Tour Championship last year. He didn't have to be a European tour member.

The noise coming from some players is creating a mentality of “us versus them," the kind of disruptive environment that serves no one.

Fred Couples was particularly blunt in an interview with golf.com last week when he referred to Perez as a “grain of sand” on the PGA Tour. He got personal with Phil Mickelson, a longtime friend. At least he once was.

“These guys — you’ve seen their interviews, right?” Couples said. “Have you ever seen Phil look so stupid in his life? They know it’s a joke.” He also said of Mickelson, “I don't think I'll ever talk to him again.”

Still to come is bringing lawyers into the mix.

Ian Poulter was among three European tour players who won a temporary stay from a British judge that allows them to play the Scottish Open, even though the tour suspended them for playing a LIV event without permission.

A lawsuit against the PGA Tour would seem to be just a matter of time. That probably won't sit well with the loyalists sharing space inside the ropes with players effectively suing them.

“I think it’s just one of those things where maybe if I walked past that person earlier and said, ‘Hey,’ or asked how they were doing, I maybe just won’t do it anymore,” Thomas said.