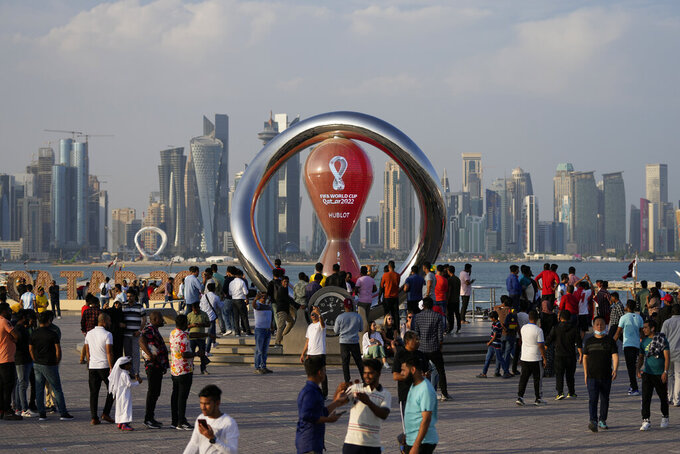 Hassan Ammar, ASSOCIATED PRESS
FILE - People gather around the official countdown clock showing remaining time until the kick-off of the World Cup 2022, in Doha, Qatar, Friday, Nov. 11, 2022. Israel’s Foreign Ministry has launched a campaign to educate Israeli soccer fans about how to navigate the laws and customs of Qatar ahead of the World Cup there. The conservative Muslim country has no diplomatic relations with Israel but in a landmark first, Israeli soccer fans will be able to travel to the Gulf Arab emirate for the tournament. (AP Photo/Hassan Ammar, File)

TEL AVIV, Israel (AP) — Israel is urging its citizens traveling to the FIFA World Cup this week to be less visibly Israeli.

The unprecedented influx of thousands of Israeli fans descending on Doha for the first World Cup in the Middle East has raised fears of an embarrassing diplomatic crisis between the countries with no formal diplomatic relations.

Israel's warning is part of a Foreign Ministry campaign, launched Wednesday, to educate the nation's soccer fans about laws and customs in the conservative Muslim country.

The campaign website, in Hebrew and Arabic, outlines a potential minefield awaiting Israeli tourists — who don't have a reputation for being discreet — in Qatar, a country that criminalizes homosexuality, bans drugs and restricts alcohol consumption.

Like many Gulf Arab citizens, including those in the United Arab Emirates and Bahrain, which normalized relations with Israeli in 2020, Qataris have a history of support to the Palestinian cause.

Further complicating matters, fans and officials from Israel's archenemy Iran will be at the tournament in Qatar, a short, 40-minute flight from Iran.

The campaign asks Israelis to hide any Israeli symbols — presumably a reference to Israeli flags and Stars of David.

“The Iranian team will be in the World Cup and we estimate that tens of thousands fans will follow it, and there will be other fans from Gulf countries that we don’t have diplomatic relationship with," said Lior Haiat, a senior Israeli diplomat.

“Downplay your Israeli presence and Israeli identity for the sake of your personal security,” Haiat said, addressing the Israeli fans.

In a landmark deal, Israelis without foreign passports can now travel to Qatar for the World Cup despite the lack of ties. Qatar announced last week it will even allow direct flights from Tel Aviv to Doha for Israelis, as well as for Palestinians in the West Bank and Gaza, whose ability to travel depends on Israeli government approval.

As part of the agreement, Qatar will permit Israeli diplomats, through a private travel company, to provide consular support to Israelis during the tournament. The diplomats left for Qatar on Wednesday.

Nearly 4,000 Israeli and 8,000 Palestinian fans have an entry visa to Qatar for the tournament. The ministry expects as many as 20,000 Israelis could ultimately attend the World Cup.

“Soccer is something many Israelis see as essential," Hayat said. “We are getting ready for the many Israelis who will show up, and at least some of them who will need our help."

When it comes to LGBTQ Israeli fans attending the tournament, the Foreign Ministry website has curt advice: “Not in public.”

The website also warns against public drunkenness, which is illegal in Qatar. During the World Cup, alcohol will be available only in designated areas, such as hotels and special “fan zones."

The campaign also offers tips to Israelis struggling to find accommodation because of the tight squeeze in the tiny emirate. It cautions against bringing prohibited drugs, including cannabis, getting into brawls and using foul language — all which can have legal repercussions in Qatar.

Israeli officials expressed hope that a positive, hassle-free Israeli presence in Qatar could advance Israel's ambitions to further integrate into the region after the normalization deals with two of Doha's Gulf Arab neighbors.

“We very much hope things will go smoothly," Haiat said.