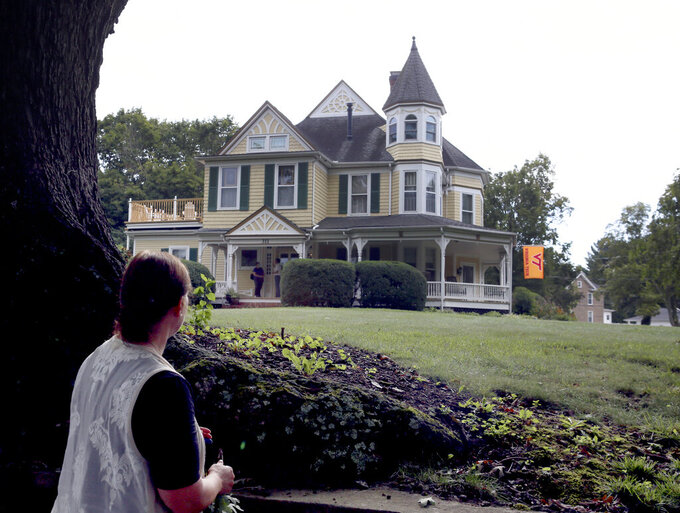 Matt Gentry, ASSOCIATED PRESS
Shannon Magenheimer, left, has dreamed of living in the "princess house" pictured in Christiansburg, Va., on Aug. 30, 2021. As a child on trips to the county seat from the family farm in Longshop, Magenheimer said she would imagine a magical life in The Oaks mansion, long a centerpiece of the downtown historic district at East Main and Park streets. (Matt Gentry/The Roanoke Times via AP)

CHRISTIANSBURG, Va. (AP) — Shannon Magenheimer has become the princess she always dreamed about.

As a child on trips to the county seat from the family farm in Longshop, Magenheimer said she would imagine a magical life in The Oaks mansion, long a centerpiece of the downtown historic district at East Main and Park streets.

Home from a long stint in the Pacific Northwest with husband and Oregon native Jason, Magenheimer has reopened The Oaks Victorian Inn.

The couple spent months meticulously cleaning the ornate original interior, from its grand central oak staircase to every inch of its five reconfigured and updated guest suites. They have upgraded the HVAC system, replaced a rooftop deck and staircase, revitalized the landscaping and refurbished a detached cottage and sitting area, which also is available for guests.

The pair lives on the third floor with a view over the neighborhood.

“I never thought I could get attached to a fish, but this guy has just been so entertaining,” she said. “He’s like a puppy.”

The Magenheimers have a long history in Montgomery County. Not only is Shannon from here originally, together the couple founded New River Coffee Company in 2002, which had locations in the mall and what is today LewisGale Montgomery Hospital.

They sold that business — which continues to operate in the Uptown Mall — when Shannon got offered a job at a resort in Washington state. Jason eventually took a position at a high-end boutique hotel in downtown Bend, Oregon, where he worked for a dozen years in luxury hospitality.

They’ve brought their extensive hospitality experience to The Oaks, where Jason has instituted a “soap menu” for guests featuring artisan products imported from Oregon.

A pillow menu is also in the works, so guests can choose what will give them the best night’s sleep, he said. And The Oaks has its own custom bathrobes made for plush comfort.

Jason can still pull an excellent espresso shot, too — a service he provides for guests. The Oaks serves a “cafe menu” breakfast with baked goods and gourmet coffee roasted by Brugh Coffee in Christiansburg, all made fresh on the premises and delivered to the rooms.

The idea is to work with as many local businesses as possible, Jason said. And to build relationships with the guests.

Built between 1889-93 by William H. Pierce, The Oaks Queen Anne Victorian mansion is the oldest house in its present-day historic neighborhood. And it is the only structure left there dating to the 19th century, according to the Virginia Department of Historic Resources.

Originally sitting on a 5-acre lot, the Oaks today is surrounded by 1.2 acres. The Pierce family occupied the house until 1981, naming it after the 10 or so original white oak trees that graced the property. Today four remain.

Pierce was a large landowner and well-known figure in Montgomery County, founding the Pierce Insurance Agency and serving in Rotary, according to the Montgomery Museum of Art and History.

The house was named a state and national historical landmark in 1994.

Past owners Tom and Margaret Ray converted the house into a bed and breakfast in 1989. Other owners ran it until the Magenheimers purchased it in May for $755,000, according to town land records.

The couple said bookings have been growing by word of mouth since they opened in late summer, with some important Virginia Tech dates already filled up.