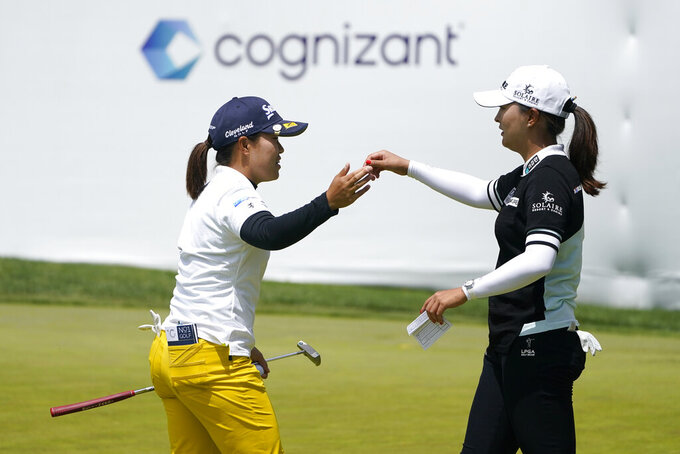 CLIFTON, N.J. (AP) — Madelene Sagstrom shot a flawless 9-under 63 during a round she felt holes kept getting larger to take one-stroke lead over Megan Khang after the first round of the Cognizant Founders Cup on Thursday.

Nasa Hataoka, who won in Los Angeles in April before taking time off, was third after a 65 on the Upper Montclair Country Club course, roughly 10 miles from New York City.

Bianca Pagdanganan, Amy Yang and Giulia Molinaro were tied for fourth at 66, a shot ahead of group that included Lexi Thompson and Minjee Lee. Two-time defending champion and top-ranked Jin Young Ko shot a 69.

Sagstrom, a runner-up last year in the Women's British Open, made birdies in batches, finishing with nine in a bogey-free round. The two-time European Solheim Cup from Sweden birdied the first four holes and had another run at Nos. 12-14.

“It was one of those days," Sagstrom said. “Like everything was easy. It’s like I was hitting the fairways, hitting the greens, and I was making all the putts. The hole just kept growing.”

Sagstrom recalled turning to her caddie, Sean Codd, and telling him, everything felt like a tap-in

“It’s one of those days," she said. “You just trying to hold on to momentum and just keep it going.”

The round was her best of the season and one shot off her career best of 62 in winning the 2020 Gainbridge LPGA at Boca Rio. Yuka Saso had the low round on tour this year, a 62 at the LPGA Hondo in Thailand in March.

Khang, who like Sagstrom played in the afternoon, was almost as good, making eight birdies on the course laid bare because of soft, slower-than-normal greens and a lack of wind.

“Definitely stroking it really well, reading the greens well,” said Khang, who tied for third at Palos Verdes in the last event.

The event, which is being played on its third course since 2019 — the pandemic canceled the 2020 edition, honors the 13 founding members of the LPGA Tour. The field of 144 will be cut to the low 70 and ties after the second round of the 72-hole tournament Friday.

Hataoka ignited her round with a 10-foot eagle putt on the par-5 second and added five birdies the rest of the way in posting her fifth straight round in the 60s.

“I was originally planning to play in Palos Verdes last week, but I decided take the two weeks off and gear up for this tournament,” Hataoka said.

Ko, who finished second at Palos Verdes in the last event, had six birdies and three bogeys — caused by failing to hit the fairways.

“I want to play a bogey-free round next three days,” she added. “This course is really tough, so hit the fairway and hit the greens, make a par. Birdie or par.”

Anna Davis, the 16-year-old who won the recent Augusta National Women’s Amateur, shot a 70 playing on a sponsor's exemption. She made the cut in the Palos Verdes Championship in California, which was won by Marina Alex.

Alex of nearby Wayne, New Jersey, will have to rally to make the cut after shooting a 74.

Ally Ewing had a 67 in a round that included a 63-foot eagle putt and a flubbed chip shot from the edge of the green on No. 13.