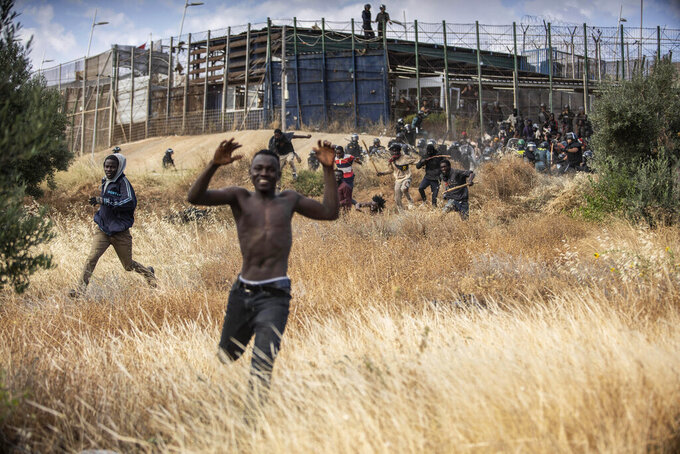 BARCELONA, Spain (AP) — Spain’s interior minister on Wednesday flatly rejected new media allegations of possible deaths on Spanish soil during a June storming by migrants of the border fence separating its north African enclave of Melilla from Morocco when at least 23 people died.

“We did not have to lament any loss of human life in our national territory. The tragic events occurred outside our country,” minister Fernando Grande-Marlaska told Spain’s Parliament in Madrid. “The insinuation that I have heard and read that our security forces would have permitted that these tragic events occur in our country is a grave irresponsibility.”

It was the second time that Grande-Marlaska spoke at length on the tragedy to the Parliament. His message did not waver despite growing pressure from fellow politicians, media reports and official investigations that cast doubt on the official version of events.

Grande-Marlaska spoke a day after Spanish newspaper El País and other major European newspapers in collaboration with the NGO Lighthouse Reports concluded that at least one death could have occurred on Spanish soil.

Videos published in a joint investigation by the NGO, El País and other media organizations Tuesday, as well a separate BBC investigation published on Nov. 1 show the gruesome details of the events on June 24th. Hundreds of men, some wielding sticks and other items, climbed over a fence on the Moroccan side and were corralled into a border crossing area. When they managed to break through the gate to the Spanish side, it appears a stampede led to the crushing of several people.

Moroccan police launched tear gas and beat men with batons, even when some were prone on the ground. Spanish guards surrounded a group that managed to get through before apparently sending them back.

The clash ended with African men, clearly injured or even dead, piled on top of one another while Moroccan police in riot gear looked on. Many were reportedly refugees from Sudan.

Grande-Marlaska maintained his position that the response by police was “appropriate” to handle a group of around 1,700 migrants who used clubs, sticks, axes and saws to violently force their way across.

“I know of no country that would accept a violent attack on its frontier," Grande-Marlaska said. “Even though I empathize with the underlying cause (of the migrants), that does not justify either directly or indirectly a direct, violent attack on our frontier with the hypothetical motive to exercise the right (to asylum).”

The barrier surrounds Melilla, a town of 85,000 separated from Spain’s mainland by the Strait of Gibraltar that has been in Spanish hands since the 15th century. Melilla and its sister enclave of Ceuta have become crossing points for African migrants prepared to risk their lives to flee war and poverty. Often the very poorest who cannot pay for a spot in a tiny boat to make the perilous crossing of the Mediterranean try their luck at storming the 12-meter (29-feet) iron double fence.

Nonprofit groups dedicated to helping migrants in northern African accuse European Union officials of essentially paying Morocco and other countries on Europe’s southern flank to stem migration flows. The impact of migration to Spain's enclaves, along with the disputed Western Sahara region, are critical issues in the recently rocky relations between Madrid and Rabat.

Spain’s state prosecutors and Ombudsman's office have both opened probes into the Melilla incident, while Spanish parliamentarians from across the political spectrum have said Grande-Marlaska must resign. Human rights watchdog Council of Europe has also voiced concern.

Spain’s Ombudsman said in preliminary findings issued in October that 470 people who had managed to cross to the Spanish side were sent back across “with no consideration for their national or international legal provisions.”

Daniel Howden, an official at Lighthouse Reports, said at a press conference at the European Parliament on Wednesday that Spanish and Moroccan officials failed to succor the injured.

“Many of the people who were pushed back across the border were then dumped like carcasses and then left for up to three hours in the sun with no medical treatment whatsoever,” he said. “Now, we don’t have autopsies which would allow us to be definite about the cause of ... the 23 known deaths, but what we can say is that there is no evidence of medical treatment being offered."

Grande-Marlaska told lawmakers that “there was no lack of medical attention” and that 11 migrants were treated in hospital, with one transferred to the mainland. He said 50 police officers were also treated.

Spain’s Prime Minister Pedro Sánchez, a Socialist, has stood firmly behind Grande-Marlaska, an investigative magistrate known for his handling of high-profile cases including the violent Basque separatist group ETA, which had targeted him for assassination.

In his ministerial post since 2018, the 60-year-old Grande-Marlaska is one of the leading members of the left-wing coalition government. One of his first acts was to remove the razor wire from the border fences at Melilla and Ceuta. The razor wire remains on the Moroccan side.