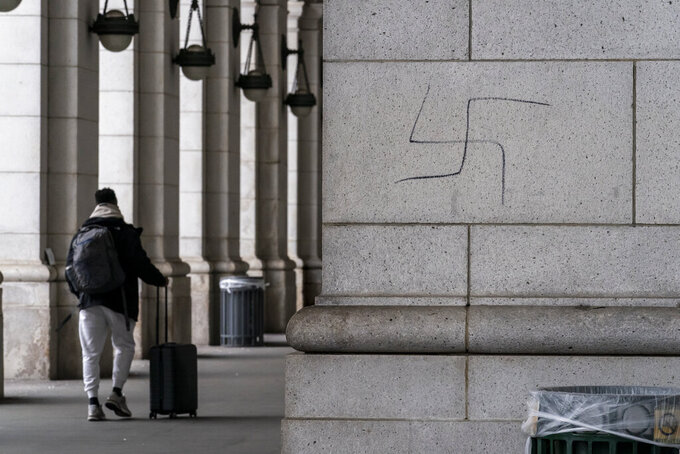 J. Scott Applewhite, ASSOCIATED PRESS
FILE - A hand-drawn swastika is seen on the front of Union Station near the Capitol in Washington, Jan. 28, 2022. The discovery this week of violently antisemitic graffiti along a popular Maryland walking trail is just the latest in a rising tide of anti-Jewish vandalism and activity dating back a decade, according to local Jewish leaders. (AP Photo/J. Scott Applewhite, File)

WASHINGTON (AP) — The discovery this week of violently antisemitic graffiti along a popular Maryland walking trail is just the latest in a rising tide of anti-Jewish vandalism and activity dating back a decade, according to local Jewish leaders.

“This is not anything new,” said Meredith Weisel, local regional director for the Anti-Defamation League.

While these issues have become front-page news in recent months, thanks to public controversies involving basketball star Kyrie Irving and the rapper formerly known as Kayne West, Jewish leaders said the frequency of the antisemitic activity long predates those scandals.

“People want a scapegoat. They want a population they can point to and say ‘They caused my problems,’ ” said Gil Preuss, CEO of the Jewish Federation of Greater Washington.

Recent years have witnessed a string of incidents from graffiti and distribution of antisemitic flyers to white supremacist rallies. While incidents in the District of Columbia remain relatively rare, a group calling itself the Goyim Defense League has distributed anti-Jewish flyers and pamphlets multiple times this year in Maryland and Virginia, according to the ADL's online incident tracker.

Weisel partially attributed the trend to an overall societal rise in extremism and racial and religious intolerance that coincides with but also precedes the rise of former President Donald Trump. In August 2017, white supremacists staged an open rally in Charlottesville near the University of Virginia; one person was killed when a man drove his car into a group of counter-protestors.

Weisel pointed out that the most recent Bethesda graffiti also included the number “1488,” a numeric symbol that carries deep meaning within white supremacist circles. That, she said, shows that the vandal wasn't just an attention-seeker going for shock value, but someone possessing a familiarity with white supremacist ideas and culture.

In January of this year, multiple swastikas were found spray painted on the exterior walls of Union Station in D.C. Police later arrested a homeless man living in a tent encampment outside the station, claiming he had a history of mental health issues.

Even so, Preuss, of the Jewish Federation, said the incident speaks to how deeply such images and sentiments have penetrated mainstream society.

“The hate and the swastikas still come from somewhere,” he said. “That person was expressing and attitude and a context that they had come in contact with.”