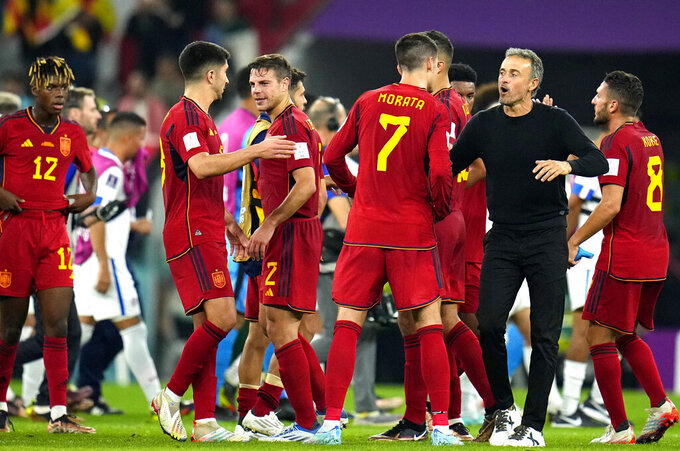 DOHA, Qatar (AP) — It was a World Cup win fit for a king. Literally.

King Felipe VI was among those congratulating Spain in Qatar after its 7-0 rout of Costa Rica in the World Cup opener Wednesday, when “La Roja” reintroduced the “tiki-taka” and put on a masterclass of ball possession and efficient attacking to get off to a good start in its quest to win a second world title.

The historic victory raised expectations about Spain's chances of succeeding in Qatar and winning soccer’s most coveted trophy for the first time since 2010, when Xavi and Andrés Iniesta were the leaders of the ball-possession style that amazed the soccer world.

“Keep singing,” King Felipe VI told the players as he entered Spain’s locker room at the Al Thumama Stadium after the match. “We’ve enjoyed it, as did everybody else. More than the result, it was delightful to watch you play.”

Spain is led by a couple of teenage sensations who have added some punch to the “tiki-taka” style. Gavi and Pedri, along with a group of other talented youngsters making their World Cup debut, provide speed and energy to go along with the constant rapid passing and ball control inherent to the style.

“The idea was for all the players in the midfield to have a lot of touches, and from there the quality of our players prevailed,” Spain coach Luis Enrique said.

Spain completed a record 1,003 passes for a 90-minute game on Wednesday, and finished with 75% of ball possession. It had 17 attempts against zero by Costa Rica.

“Our only goal is to control the game continuously, and to do that you need to have the ball,” Luis Enrique said. “The rival gets frustrated and struggles to find space. We were exceptional with how we pressured.”

The 18-year-old Gavi and the 19-year-old Pedri controlled the pace of the match along with veteran Sergio Busquets, the only remaining member of the 2010 World Cup-winning squad. Up front, the 22-year-old Ferran Torres, along with Dani Olmo and Marco Asensio, worked aggressively off the ball to quickly regain possession.

“It was a match in which we came out strong and went for the victory from the very first minute,” said Gavi, who was named the most valuable player and scored in the 74th minute to become the youngest World Cup scorer since Pelé in 1958.

“He is a unique player,” Luis Enrique said of Gavi. “He is 18 but has the personality of an experienced player. We are very happy to have him. I think he is going to be one of the stars in world football.”

Spain has the third-youngest squad at this year’s tournament, but Luis Enrique is not worried with his players being overly confident heading into the much-anticipated match against four-time world champion Germany on Sunday. The Germans lost 2-1 to Japan in their Group E opener on Wednesday.

“The praise can make you weaker, but this team will not relax,” Luis Enrique said. “I know it because I see how they practice and I can tell you that they won’t let up. Germany is a powerhouse and it can beat us, but we will come out playing the same way.”

Spain, which hadn't won a World Cup opener since 2006, still had Xavi and Iniesta when it won its last major title at the 2012 European Championship. Now it will be up to the likes of Pedri and Gavi to make the new “tiki-taka” thrive and lead Spain in its quest for the World Cup trophy.

So far so good, as even the king is impressed.

“It’s nice to get off to a start like this,” King Felipe VI told the players before leaving the team’s locker room carrying a Gavi shirt autographed by the entire squad.