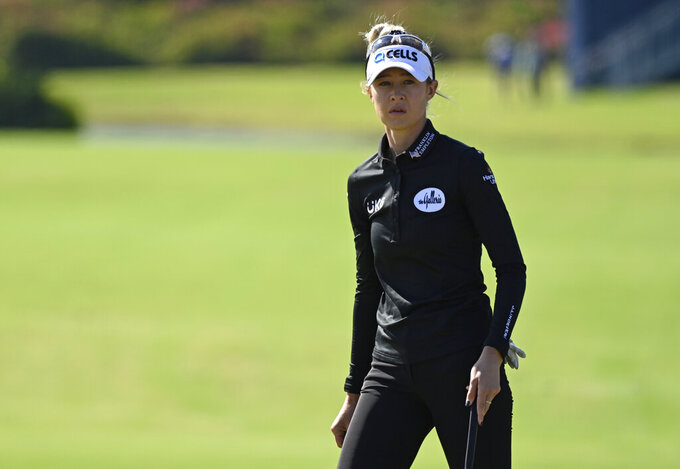 Each has four victories going into the CME Group Tour Championship, the season finale on the LPGA Tour with more than just $1.5 million at stake.

They are separated by a mere 10 points in the race for LPGA player of the year, with Korda taking the lead with her playoff victory last week. Both have a chance to finish the year with a sub-69 scoring average, a feat accomplished only once on the LPGA Tour, nearly 20 years ago by Annika Sorenstam.

They play together in the opening round Thursday because of their 1-2 standing in the Race to CME Globe, along with Lydia Ko at No. 3, who has reason to feel she's just along for the ride.

“I might be third in the Race to CME, but I feel like I'm 100 compared to them,” Ko said. “I feel like there is a little less pressure on me because they have the player of the year and they're so close in everything that I was like, ‘OK, I’m going to be spectating while playing tomorrow.'"

There is plenty at stake for Ko and the entire 60-player field.

The LPGA Tour has a points race all year that effectively becomes winner-take-all at the end. The math has never been simpler: Whoever wins the tournament — whether that's Korda at No. 1 or Jenny Coleman at No. 60 — gets the biggest prize in women's golf and is crowned the Race to CME Globe champion.

“It would be crazy to win that,” Korda said. “Everyone would get a nice Christmas present.”

It gets even bigger next year. The tournament announced Wednesday the CME Group Tour Championship will offer a $7 million purse in 2022, with $2 million to the winner and $40,000 for last place.

Jin Young Ko won it last year in only her fourth LPGA event of the pandemic-delayed year. She spent most of the year in South Korea and didn't show up in America until November.

It feels like a late start this year, too. The 26-year-old with the smooth putting stroke was distracted early in the year by the failing health of her grandmother, who died in March right before the first major of the year.

Motivation was hard to find until Ko realized it was the best way to honor her grandmother.

Korda won the second event of the year, picked up back-to-back wins in June (including the Women's PGA Championship for her first major), won at the Tokyo Olympics for a gold medal she takes everywhere and then overcame a late triple bogey to win the Pelican Women's Championship last week to match Ko with a fourth LPGA win.

It's the first time the LPGA has had two players with at least four wins since 2016, when Ariya Jutanugarn won five times and Lydia Ko won four.

The big race is player of the year. The points are such that Jin Young Ko has to finish at least second to have any chance, while a victory would clinch it no matter what Korda does.

Korda never really paid close attention to the race before because she was never in it. This was truly a breakout year for the 23-year-old American, who had three career wins coming into 2021 and now is No. 1 in the world.

"It's crazy because usually I come to this event and I’m so far away from that. I see so many girls that have had an amazing year, and I’m like, ‘OK, I would have to play amazing to even be in contention for that.’

“So the fact that I’m in contention just shows how well I’ve played this year and shows how much my hard work has been paying off.”

Neither is in the running for the Vare Trophy for the lowest scoring average. The LPGA Tour requires at least 70 rounds to be eligible, a standard it did not adjust despite five tournaments being canceled because of the pandemic.

Only eight of the top 20 players in the Vare Trophy standings are eligible, and Lydia Ko — who played last week to get in the required rounds — is the likely winner. That comes with a point toward the 27 required for the LPGA Hall of Fame.

The LPGA says it is considering a change in its policy for next year. This is the second straight year the player with the lowest scoring average has not been eligible for the award. Last year it was expected because the reduced schedule brought on by COVID-19. This year, with multiple players being ineligible, it got the tour's attention.

The tour believes as prize money is slowly increasing, players are being more selective where they play. This week is an exception. It's where everyone wanted to be for a shot at $1.5 million.