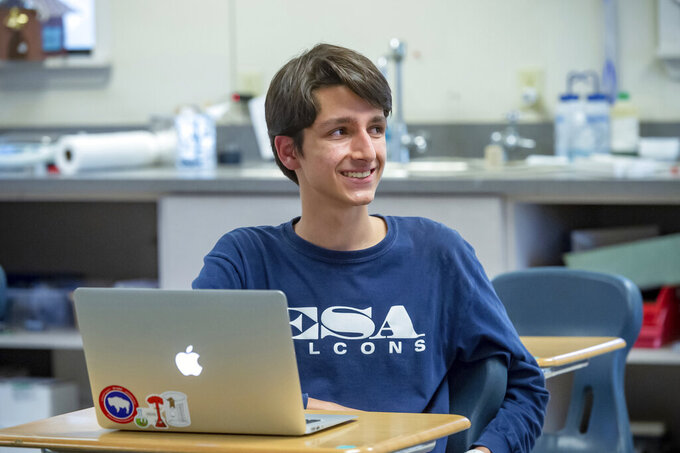 It’s the main thesis of a 3-minute video he created to explain prion protein diseases in a creative and engaging way. The video includes footage of Anil as well as animated graphics to break down the complex life science topic, all edited together on his home computer last spring.

His video compares prion proteins to zombies, using scientific vocabulary and corny jokes as well as interesting lighting and graphics. He uses easy-to-understand language and shows real-world implications by connecting the topic to current research on Alzheimer’s disease.

“I like zombie movies,” Anil said. “That was the first thing that popped into my mind — these are zombie proteins.”

Zombies served as a great bait to hook viewers, he said.

He did the project himself with editing and animation programs like Adobe After Effects and DaVinci Resolve as well as coding, and his video has made it to the final round of a global competition called the Breakthrough Junior Challenge.

“I’d never applied code in a way like that outside of the classroom,” said Anil, who’d learned coding in a computer science class at the Episcopal School of Acadiana.

The ESA senior is one of 30 finalists in the contest, which attracts around 12,000 applicants from 190 countries each year.

The competition calls for students aged 13-18 to produce original videos explaining an important topic in life sciences, physics or mathematics to inspire creative thinking about science, according to its website.

“What I like about science is that there’s not always a right answer,” the high school senior said. “It’s a truth-searching process. You don’t know what you’re looking for, but you’re coming to a solution.”

HOW THE CONTEST WORKS

Video entries are judged on engagement, illumination, creativity and difficulty in addition to a popular vote period on social media. The 30 finalist videos are posted on Breakthrough’s Facebook page from Sept. 5-20, and the public can vote with positive reactions (like, love, haha or wow).

The results of the challenge will be announced in November.

Anil’s video is being shared on Facebook by ESA families, and the school posted about it on Instagram.

Winners earn significant monetary prizes and national recognition for themselves and their schools. Anil would receive $250,000 to a university of his choice, $50,000 for his chemistry teacher, Rachel Snider, and $100,000 to the school for a new science lab.

“That is life-changing for the student, the school and the educator,” said Snider, who has gotten to know Anil through her classes and school quiz bowl team.

Snider is excited to see it gain momentum for Anil’s sake as well as what it could mean for those who view the science video.

“It’s a topic a lot of adults don’t know that much about,” the teacher said. “It’s something we can learn as we grow up — that curiosity and why science is cool. We can bring back that curiosity.”

Other finalist videos cover topics like probability in the form of a game show, how antibody drug conjugates fight cancer depicted by people dressed as medieval knights, and genetic inheritance as told by Lego. They represent students from countries all over the world.

Anil’s video caption lists his country as Portugal, his birthplace. He is a dual citizen of the U.S. and Portugal, and he has been at ESA since eighth grade in 2017.

Anil found the competition last year during quarantine while “looking for things to do” and made a last-minute video about mRNA vaccines. That video didn’t progress through the contest, but the process taught him a lot, Anil said.

“I would not have had time to do it before the pandemic,” he said.

Snider said finding the competition on his own and making the video are further evidence of Anil’s initiative and curiosity.

“And if he wins, it would bring a positive light to what people here are capable of — creativity and innovation,” Snider said.

That’s exactly what Anil aims to do.

“To me (this contest) means representing Louisiana well,” he said. “We’re not as optimistic as we should be on education. We have an excellent state with excellent students and excellent teachers.”