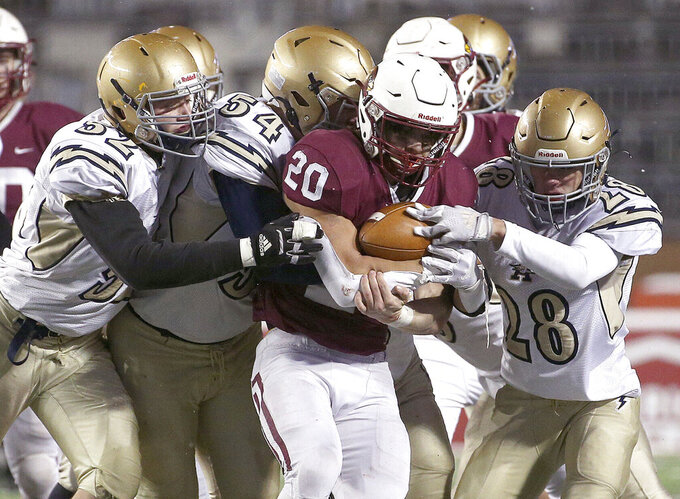 Peter Thomson, ASSOCIATED PRESS
Mayville running back Blake Schraufnagel (20) rushes during the WIAA Division 5 championship game against Aquinas High School at Camp Randall Stadium in Madison, Wis., on Nov. 17, 2022. Schraufnage has been selected as The Associated Press football player of the year after helping the Cardinals advance to the WIAA Division 5 championship game two years in a row. (Peter Thomson/La Crosse Tribune via AP)

Wherever his football journey takes him next, Blake Schraufnagel will always remember where it started.

It’s safe to say the Mayville community won’t be forgetting the running back anytime soon, either.

On Thursday, Schraufnagel was selected as Wisconsin Associated Press Player of the Year for high school football in 2022. The selection is made by a statewide media panel.

“My freshman year of high school, our varsity team was 2-7 and you could kind of tell that the community was a little deflated. There weren’t that many people at the games,” Schraufnagel said. “As we grew older and started to win more, you could kind of feel the community get back involved in it and that was something that was really special to me.

“Each week you’d see more and more people show up at the games and the atmosphere was higher and higher. It was really cool to experience that throughout my career.”

Schraufnagel was at the forefront of that resurgence for Mayville, which posted a 24-4 record over the past two seasons – including 13-1 this season – and played in the WIAA Division 5 state championship game the past two years.

In addition to Thursday's honor, Schraufnagel was earlier named as the Wisconsin Football Coaches Association’s Small School offensive player of the year this season.

Colton Brunell of Columbus, Jerry Kaminski of Sun Prairie East, Chase Matthias of Two Rivers and Wynn Stang of Mukwonago were also nominated for AP player of the year.

Mayville coach Scott Hilber called Schraufnagel “incredibly coachable” and noted he’s a letter winner in four sports as well as No. 1 in his class academically.

“In addition to being a tremendously gifted athlete, Blake is simply an all-American human,” Hilber said. “His greatest quality is that he is a kind and generous person who treats everyone with the utmost respect and sincerity. Blake is active in community service activities and it’s unlikely there is anyone who has ever had a negative experience with him.”

Schraufnagel is a first-team all-state selection for the second year in a row. He finished third in the state in rushing with 2,610 yards and had 40 rushing touchdowns. He averaged 10.8 yards per carry.

The Flyway Conference offensive player of the year also caught 18 passes for 360 yards and two touchdowns. He also was first-team all-conference on defense where he moved to safety this season and posted 58 total tackles and three interceptions.

Schraufnagel ran for 168 yards and four touchdowns in a victory over perennial power St. Mary’s Springs when the Cardinals clinched the Flyway title. In the state semifinal game against Prairie du Chien, he rushed for 273 yards, scored all four Cardinals touchdowns and came up with the game-clinching interception.

“I’ll give a lot of the credit to not only the offensive line but the tight ends as well as the running backs that block for me. They made my job pretty easy as a running back,” said Schraufnagel, who finished his career with 5,734 yards and 88 rushing touchdowns. “I’m the one with the name highlighted on it, but a lot of that can be attributed to anyone on the team. They pushed me to become the best version of myself and ultimately get those goals.”

Schraufnagel, who will play in the Blue-Grey All-American Bowl at Raymond James Stadium in Tampa, Fla., on Jan. 30, has received considerable recruiting interest from Division II schools and has about 10 offers. He is planning official visits to Minnesota-Duluth and Winona State soon and also includes Augustana University in South Dakota among his top three choices.

Hilber thinks Schraufnagel would be a great fit at Wisconsin and has been vocal about his star athlete deserving at least a walk-on opportunity with the Badgers. Schraufnagel is a lifelong Badgers fan and his sister goes to school there.

Schraufnagel said his college decision will ultimately be what he thinks is the best fit on and off the field.

“At the end of the day, it comes down to where I can compete and where I find myself most happy,” he said.