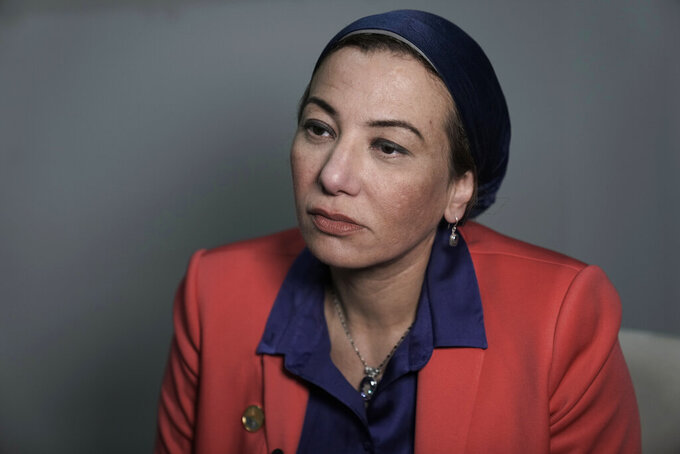 SHARM EL-SHEIKH, Egypt (AP) — Egypt is pushing to bridge the gaps between negotiating parties at the United Nations’ climate conference as negotiators Saturday finalize draft deals as the first week of the summit wraps up in the seaside resort of Sharm el-Sheikh.

Environment Minister Yasmine Fouad said the biggest challenge for Egypt as a host country is to have negotiators “convinced on different issues,” including funds for nations to adapt to climate change and a consensus on ‘loss and damage’ — finance from industrialized nations to poorer, vulnerable ones who are suffering climate-related harms.

Speaking to The Associated Press at the climate summit, also known as COP27, Fouad said the host nation is also working to advance the working program aimed at limiting warming to 1.5 degrees Celsius (2.7 degrees Fahrenheit) since pre-industrial times in line with the Paris agreement. Egypt has said it will pressure other nations to implement climate promises made at previous conferences.

“There is a kind of agreement that we need to push the agenda forward,” Fouad said of negotiations. “But it depends on all of us on that.”

Finance is another major challenge for developing nations looking to curb emissions, transition to renewable energy and protect their vulnerable communities from climatic shocks, such as drought and flooding. For the first time, this year’s summit agenda also included the issue of loss and damage.

Rich nations have already fallen short on a pledge to mobilize $100 billion a year by 2020 in climate finance for poor nations. This has opened up a rift of distrust that negotiators are hoping to close with fresh pledges. But needs are growing, and a new, higher target needs to be set from 2025 onward, some nations say.

Egypt needs up to $264 billion investment in the next seven years to achieve its adaptation and mitigation agenda, the minister said. Much of the country’s infrastructure depends on fossil fuels, and its coastal regions, including parts of the fertile-rich Nile Delta, are increasingly threatened by the rising sea levels.

“Finance is the bottleneck of any green transition,” Fouad said.

Egypt, the most populous Arab country with over 104 million people, is already facing uphill economic challenges partly as a result of the COVID-19 pandemic and the ongoing Russian war in Ukraine.

The Egyptian government announced several deals in recent days with western nations and global development banks to make its energy and transport sectors cleaner, including a $500 million package to finance and facilitate its transition to clean energy. The package, which was announced Friday by U.S. President Joe Biden, would help Egypt reach its goal of producing 42% of its electricity generation from renewable sources in 2030 — five years earlier than previously planned.

Environmental groups have in recent months criticized the government for razing green areas and cutting trees that were lining streets, as part of sweeping urban redevelopment projects that are transforming much of historic Cairo, including the well-known Heliopolis neighborhood.

The minister defended the measures, saying they were necessary.

“Sometimes you need to have a street widened so that there is no traffic jam" and that would have a positive impact on air quality, Fouad said.

She added that the government is no longer reducing its green areas and plans to plant 100 million trees across the country.