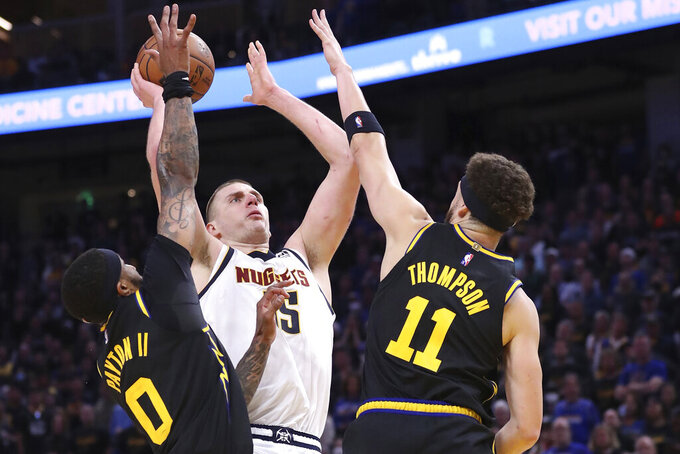 DENVER (AP) — Nikola Jokic plays for Denver. And for Serbia.

Both places can once again make the same claim: For the second consecutive season, they’re home to the NBA's Most Valuable Player.

The league announced Wednesday night that Jokic won back-to-back MVP awards. The Nuggets' big man is the second consecutive international player to win two in a row, after Milwaukee’s Giannis Antetokounmpo — from Greece — was honored in 2019 and 2020.

This marks the first time international players have won the award in four consecutive seasons. Canada’s Steve Nash went back-to-back for Phoenix in 2005 and 2006, followed by Germany’s Dirk Nowitzki for Dallas in 2007.

The 27-year-old Jokic averaged 27.1 points, 13.8 rebounds and 7.9 assists on a team that was missing two max players in Jamal Murray (ACL) and Michael Porter Jr. (back) and won 48 games. The do-it-all center nicknamed “Joker” created a new category, too, in becoming the first NBA player to eclipse 2,000 points, 1,000 rebounds and 500 assists in a season.

Jokic was caught by surprise, too, as he rode in behind his horse on a two-wheeled cart at his stable in Serbia. Malone was waiting to hug him. Same with president of basketball operations Tim Connelly.

“It was a real emotional moment for me,” Jokic said in an interview on the TNT broadcast. “Amazing.”

Jokic was taken by the Nuggets with the 41st pick in the 2014 draft. His selection that day flashed across the bottom of the television screen during a Taco Bell commercial.

He’s come a long way. He’s eligible for a supermax extension that could guarantee him nearly $254 million over five seasons starting with 2023-24.

This will all dawn on him — down the road.

“Probably when I’m old, fat and grumpy, hopefully I’m going to remember and I’m going tell my kids, ‘Back in the days I was really good playing basketball,’” Jokic said.

James extended his record, too — 19 years in the league, 19 years of getting at least one vote in the MVP balloting (a fifth-place vote). Nobody has gotten votes in more seasons, or obviously, in more consecutive seasons than James.

Despite their disastrous season — the Los Angeles Lakers didn’t even make the play-in tournament — James’ numbers remained among the league’s best. The 37-year-old averaged 30.3 points, 8.2 rebounds and 6.2 assists per game, moving past Karl Malone for No. 2 on the all-time scoring list and into position to pass Abdul-Jabbar as the league’s all-time leader late next season.

James has seen the game change during his 19 seasons. He was part of the last USA Basketball team that didn’t win Olympic gold — the squad that went to Athens in 2004 — and even was convinced then that the game was only getting stronger around the world.

Jokic is further proof of that happening.

He’s not demonstrating it by himself, either. Antetokounmpo and Embiid have more than done their part. Dallas' Luka Doncic (fifth in the MVP vote) is already a EuroLeague champion and certainly seems like he’ll win at least one NBA MVP award before he’s done.

They are the new class of international greats, following in the footsteps of Nowitzki, Hakeem Olajuwon, Tony Parker, Manu Ginobili, Pau and Marc Gasol, Yao Ming and others. The debate will rage about which international player — either now or all-time — is the best, but Antetokounmpo (two MVP’s and a championship) and now Jokic (two MVP’s after being a second-round pick) have surely entered the chat.

Canada got a championship in 2019 when the Toronto Raptors won the NBA title. That night, the Canadian flag was soaked in champagne, Pascal Siakam danced with the flag of Cameroon around his shoulders, team President Masai Ujiri did interviews with a Nigerian scarf around his neck, and they were only a few of the Raptors with deep international ties.

It’s not inconceivable that five international players could be lottery picks in next month’s draft. And there’s hardly anyone who doesn’t see France’s Victor Wembanyama — a 7-foot-2 player with guard skills — as the certain No. 1 pick in the 2023 draft right now.

Those newcomers will want to be like Jokic. They’ll want to be the MVP, and he’s just the latest name to show those kids from around the world that it’s possible.

“If it’s not me, who is it?” Jokic responded when asked if he considered himself the longest of long shots. "There’s no way that I would come to the NBA and play basketball from this city and from this stable, basically. Now I'm playing basketball in the best league in the world and playing at a high level.”