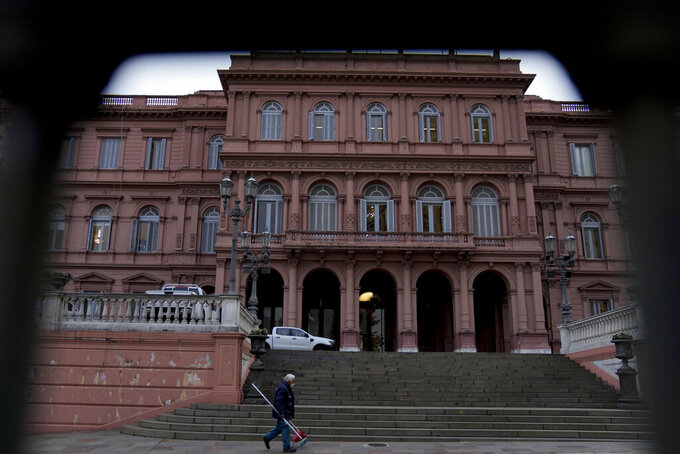 Batakis was named late Sunday to take over from Martín Guzmán, who was largely seen as a moderate voice within President Alberto Fernández’s Cabinet. Guzmán had been the target of strong criticism from more left-leaning elements of the governing coalition, including Vice President Cristina Fernández, who is not related to the president.

The peso’s value was down 18% at one point in the informal market Monday, reaching 280 per dollar, before recovering some late in the day. Prices for government bonds plunged as much as 10%, signaling fears of worsening inflation, while stocks also saw declines.

The historic volatility of the peso means Argentines largely save in U.S. dollars and the exchange rate is closely followed as a general barometer for the economy.

Some analysts cautioned it was too early to say if the peso is at a new low because trading activity was very light Monday, indicating that many people might be taking a wait-and-see attitude.

“These are prices that must be taken with a grain of salt today,” said Gustavo Ber, an economist who heads local consultancy Estudio Ber.

But others said it was a signal that after serveral economic crashes in recent decades, Argentines are worried that inflation already running at an annual rate of 60% will worsen under Batakis, who was sworn in late Monday afternoon.

“This is what we expected, a pretty strong reaction from the markets,” said Marcos Buscaglia, an economist who is a partner at local consulting firm Alberdi Partners.

Argentines crowded into stores over the weekend to buy big ticket items like refrigerators and ovens.

“More inflation is on the way,” Buscaglia predicted, saying the appointment of Batakis indicates that the policy preferences of the left-leaning vice president are predominating in the government.

Fernández, who herself was Argentina's president in 2007-2015 and continues to hold a strong base of support, has publicly criticized austerity efforts meant to try to tame inflation.

Guzmán, who was seen as a close ally of the president, resigned Saturday with a seven-page letter posted on Twitter at a time of tension in the governing coalition about how to deal with the economic problems gripping the country.

In addition to inflation, Batakis will have to deal with an economy in which about four of every 10 Argentines are poor and the Central Bank is running perilously low on hard currency reserves.

Batakis has a long history of public service and was the economy minister of Buenos Aires province, the country’s most populous district, in 2011-2015 under then Gov. Daniel Scioli, who was recently named the federal production minister.

A big question mark involves the future of the country’s recent deal with the International Monetary Fund to restructure $44 billion in debt.

Many left-leaning members of the governing coalition have publicly opposed the IMF agreement, saying it involves too many concessions to the multilateral institution that will hamper growth.

While the country waits for Batakis to lay out her plan for the future, some analysts caution her path forward is difficult.

“One would expect the new minister would try to calm the financial market first, and then order the macro (economy),” said Matias Carugati, an economist with Consultora Seido. “But it really is difficult to know today whether that will happen, considering we do not have a lot of information about the government plan. They’re assuring continuity with respect to what Guzmán was doing, but it was precisely that plan that led to his resignation.”