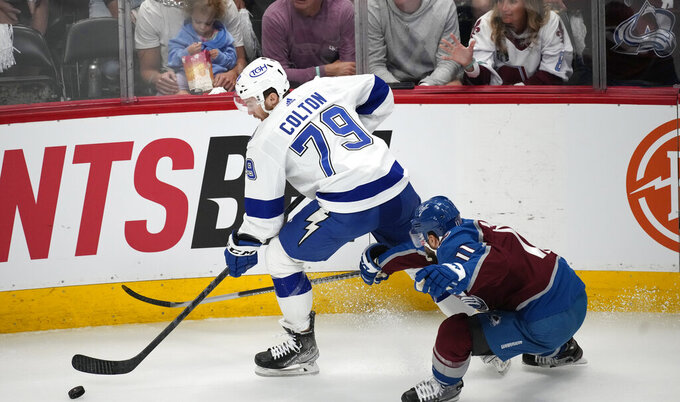 DENVER (AP) — The Stanley Cup championship celebrations are quieting down for the Colorado Avalanche. Time to get down to the business of defending their title.

Colorado's first big move in what's sure to be a busy offseason was re-signing veteran forward Andrew Cogliano to a one-year deal Tuesday. The 35-year-old Cogliano played a gritty role in helping the Avalanche hoist their first Cup since 2001.

All over the ice, the Avalanche are filled with unrestricted free agents. There are forwards like Nazem Kadri, Andre Burakovsky, Valeri Nichushkin, along with defensemen such as Josh Manson and Jack Johnson, and goaltender Darcy Kuemper. There are also several restricted free agents like Artturi Lehkonen and Nicolas Aube-Kubel.

“The guys that drive the bus every night are still here and are very hungry, ” Cogliano said over a Zoom call.

That would be the nucleus of Nathan MacKinnon, Cale Makar, Mikko Rantanen and captain Gabriel Landeskog. Makar is the reigning Conn Smythe Trophy winner as the postseason MVP.

“We're going to be hungry for more. We’ve got a taste of it now," said Cogliano, who plans to take the Cup back to the Toronto area when he gets his chance with it. "With the guys we have on our team who are very driven, I think they’re only going to want more of that. I think that’s a perfect place to start next season.”

Cogliano was acquired by Colorado at the trade deadline from San Jose for a fifth-round pick in the 2024 draft.

More than his three goals and three assists in the postseason, he demonstrated his determination by returning from a hand injury he suffered in the Western Conference finals against Edmonton. He went through surgery but was back for Game 2 of the Cup final against Tampa Bay in a series the Avalanche would take 4-2.

Cogliano also delivered a heartfelt speech at the team hotel before the series clincher to rally the squad. They lost Game 5 at home and he wanted to help them regain their focus.

“It was a new experience for a lot of guys, going into the game thinking you’re going to win the Stanley Cup and expecting to, really," Cogliano said. "I felt like if I got that out in the open, we could all kind of accept it and make a plan heading into Game 6 and get our minds right and get our emotions right.

"I thought we did that perfectly. Everything we talked about, everything we agreed upon that night I thought we executed 100% that Game 6. I think that’s why we played probably the game of our lives in terms of execution."

Simply the voice of a veteran shining through.

“Andrew was such a big part of our Stanley Cup championship with his leadership and veteran presence,” Avalanche general manager Joe Sakic said in a statement. “He’s a great teammate who works hard on and off the ice and sets a great example for the rest of the group.”

Cogliano is already planning his workouts for next season.

First, though, a little more relaxation time at his cabin in British Columbia with his family.

“Obviously, a short summer but I think it’s exciting. It will go by quick and I don’t think that’s necessarily a bad thing," Cogliano said. "Come back in September and get to work as a team and get back to where we were this year."