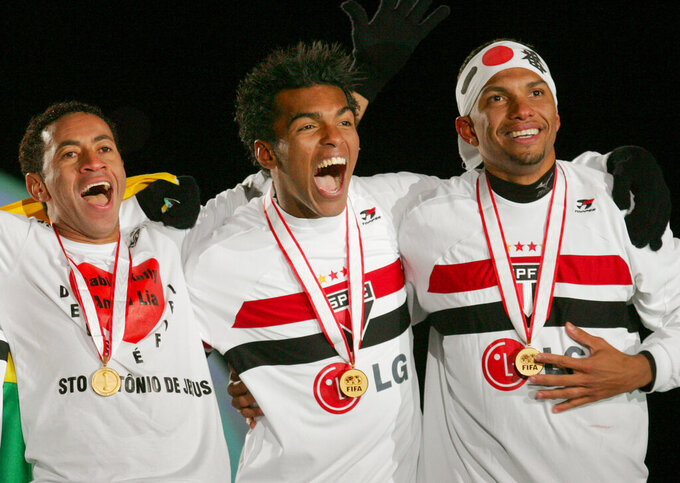 SAO PAULO (AP) — Former Brazil and Sao Paulo midfielder Richarlyson said in a podcast on Friday that he is bisexual, a rare revelation in a country where macho culture in soccer is rife.

He is the first player from a Brazilian top-flight team to say he's bisexual.

The 39-year-old Richarlyson played two matches for Brazil in 2008. He was part of the Sao Paulo squad that won the 2005 Club World Cup against Liverpool. The midfielder also won three national titles for the club. Ricky, as fans used to call him, was also in Atletico Mineiro's Copa Libertadores winning squad in 2013.

“So many people say it is important that I stand up, so I decided to say it today. I am bisexual."

The former footballer and analyst at TV Globo said he didn’t talk about his sexuality previously because he believed “the world is not ready to have this discussion and handle this naturally.”

The only similar public case in Brazil was a fourth-division player in 2010; goalkeeper Messi, who played for Palmeira, a team from the inland city of Goianinha.

Richarlyson said he chose his career over revealing his sexuality.

“I am not saying this because I stopped playing. No," he said. "I never said it because it was not my priority. It wasn't today either, but now I felt comfortable to say it. I wish this was not a topic. I wanted to talk about my new career as a pundit,” he said.

Sao Paulo asked for respect for its former player on Twitter: “That same courage he shows in his life. Maximum respect for his trajectory,” the club said, without mentioning the content of the interview.

“Richarlyson, thanks for recognizing Atletico is the only team you played and did not suffer prejudice,” the club said on Twitter. “May soccer be a place of respect to any sexual orientation.”

Sao Paulo-based Corinthians also celebrated his openness in the podcast.

Corinthians posted on Twitter: “Richarlyson was a great player, a great rival on the pitch and is a great sports professional. Now, after he says he is bisexual he remains all of that, and puts himself as an important voice of the resistance. We have the utmost respect.”