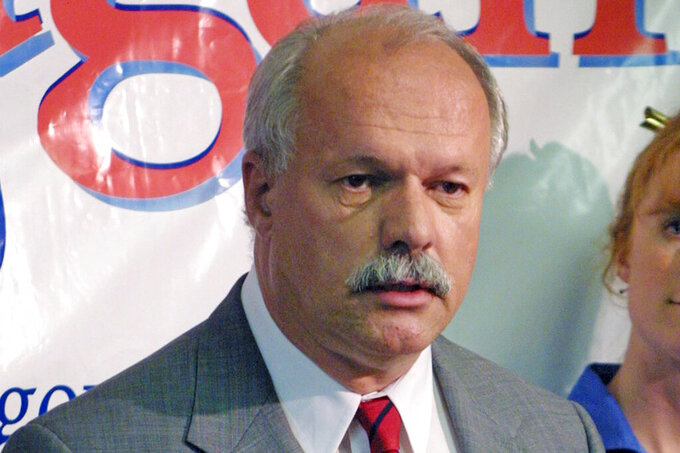 Joel Page, ASSOCIATED PRESS
FILE— In this July 18, 2002 file photo, Maine gubernatorial candidate David Flanagan announces that he is withdrawing from the race during a news conference in South Portland, Maine. Flanagan, who was at the helm of Maine’s largest electric utility during the disastrous 1998 ice storm, served as president of the University of Southern Maine and returned to lead the utility out of a series of missteps, has died. He was 74. The former leader of Central Maine Power had been battling cancer and died Thursday, Oct. 14, 2021 a family spokesperson said. (AP Photo/Joel Page, File)

PORTLAND, Maine (AP) — David Flanagan, who was at the helm of Maine’s largest electric utility during the disastrous 1998 ice storm, served as president of the University of Southern Maine and returned to lead the utility out of a series of missteps, has died. He was 74.

The former leader of Central Maine Power had been battling cancer and died Thursday, a family spokesperson said.

One of Flanagan’s last acts with the company was to help find a new CEO, Joe Purington, who was appointed in August.

Democratic Gov. Janet Mills called him “an honest trouble shooter" and “corporate and community activist,” among other accolades.

“In our 50 years of friendship, I always saw in him the same spirit of adventure, inquiry and honesty as when we first met. His loss is devastating to me and to the state of Maine,” she said.

Flanagan, of Manchester, served as CMP’s president and CEO from 1994 through 2000, including during the severe ice storm in January 1998 that left half the state’s residents without electricity while trees and power lines littered ice-covered roads across most of the state.

The storm caused more than 415,000 power outages, and it took utility crews that converged on Maine from as far away as North Carolina 23 days to restore power.

As the state pulled together, "our company and our government and our whole state showed its best side,” he said.

“The Ice Storm of 1998 was one of the most serious challenges our state has ever faced – and during that perilous moment, David was tireless in working to help Maine people in need," said independent Sen. Angus King, who was governor at the time.

He returned to CMP in February 2020 to serve as executive chairman amid mounting frustration over a botched rollout of a billing system, slow response to storm damage and power outages, and a controversial utility corridor that would serve as a conduit for Canadian hydropower.

He continued to work even after acknowledging he had pancreatic cancer and was receiving treatment at the Harold Alfond Center for Cancer Care.

“David loved the state of Maine and the indelible spirit of all Mainers, a characteristic he himself held so well to the end,” Flanagan’s family said in a statement Thursday.

Flanagan was schooled in Bangor, Hampden and Portland, and graduated from Harvard during the Vietnam War. After the Army rejected him, he attended graduate school at King’s College in London School of Economics. He later earned a law degree from Boston College.

His varied jobs included a stint as general counsel to the Senate Homeland Security and Governmental Affairs Committee during the investigation into the federal response to Hurricane Katrina.

“No matter the challenge, David would use his leadership talents to make a positive difference,” said Republican Sen. Susan Collins, who called Flanagan “a treasured friend.”