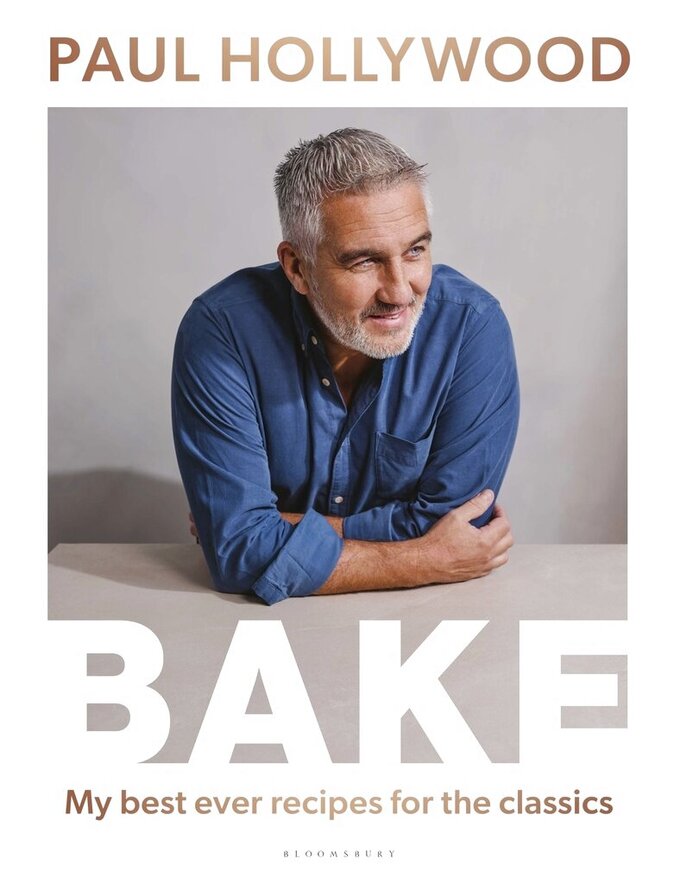 Uncredited, ASSOCIATED PRESS
This image released by Bloomsbury shows "BAKE: My Best Ever Recipes for the Classics" by Paul Hollywood. (Bloomsbury via AP)

NEW YORK (AP) — If Paul Hollywood needed any evidence that he and “The Great British Bake Off” have become pop culture icons, he just needs to turn on Netflix.

There last year, in the starry heist film “Red Notice” starring Dwayne “The Rock” Johnson, Ryan Reynolds and Gal Gadot, was a snippet of Hollywood's show, an unlikely hit on both sides of the Atlantic.

In one scene, Gadot, after a double- or triple-cross, is shown relaxing in front of a TV as she waits for a trap to spring on one of her co-stars. "She sits down and watches me on the ‘Bake Off’ and I’m going ’What? That’s Wonder Woman!'” says Hollywood, still amazed.

Hollywood may have gone full Hollywood but he's not forgetting where the magic happens. The English baking specialist has returned to the basics this summer, offering ultimate versions of recipes that have been adjusted and updated for the modern world in the new cookbook “Bake” from Bloomsbury Publishing.

“There were certain things I thought were too sweet and you didn’t need to have that much sugar in them. I think our palates have changed over the last 20, 30, 40, 50 years,” he says. “I thought, ‘Well, if you can reduce sugar and still enjoy a fantastic cake, then surely that’s a good thing.'”

The book is divided into six parts — cakes, cookies and scones, breads and flatbreads, pizzas and doughnuts, pastry and pies, and desserts. There are fine-tuned versions of everything from chocolate orange banana bread and cheese and onion soda bread to quattro formaggi pizza and fish pot pies.

Each recipe aims to capture the essence of the dish, and Hollywood hopes home cooks learn the basics. “Once you’ve mastered it, then you can tweak it and alter it and change it and make it your own. You need to master it first — walk before you can run,” he says.

In addition to adding less sugar — and also less salt — Hollywood has put his own twist on certain recipes, like asking for bread flour — also known as strong flour — in his scones and ditching lemon in favor of a lime meringue pie.

A former professional baker, Hollywood has built a media empire writing cookbooks and TV judging. He's known as much for rewarding contestants with a prized handshake as he is for his blunt assessments of dishes, saying things like “I think they’re a little bit messy” and “They need to be in the oven much longer. It’s way underdone. It’s a shame.”

There is a spareness to each recipe in “Bake,” a reflection of Hollywood's blunt but fair persona. There's often a few sentences of introduction with an explanation of his tweaks and then a set of economical directions, some no more than a few hundred words.

“You can have your froufrou and your fluffy comments when you’re eating with your friend,” he says, laughing. “I said, ‘Let’s just cut to the chase, get the bloody thing made and then you can sit down and talk.’”

All you really need to bake like a pro, he says, is a kitchen scale, your hands and a good oven. Would-be bakers should not be intimidated by working with humidity or yeast.

“I think ultimately the recipes themselves are very approachable,” he says. “If you weigh up the recipe correctly and your oven has been serviced — or it’s been cleaned and it’s been maintained well and it is achieving the temperature that it says it’s achieving — you are 90% of the way there just by weighing things up correctly. After that, it’s a case of just throwing it into a mixer and mixing it.”

Hollywood's passion for baking is infectious and his knowledge deep. If you thought sourdough — which became more popular during the pandemic — originated in San Francisco, Hollywood goes further back. He traces it to the ancient Egyptians who baked it for the sun god Ra, then to the Romans and then Europeans, who brought it when they emigrated to California.

“What is a sourdough? Well, for me, as long as you’re not using shop-bought yeast, you’re making your yeast in flour water, and you’re harnessing the airborne bacteria, then what you’re doing is a sourdough,” he says.

Speaking of the pandemic, Hollywood is encouraged by more and more bakers turning to their kitchens and baking muffins, cookies or baked goods to sell.

“People have a passion of baking, which, yes, was there before. But what’s happened is they’ve nurtured that passion through the pandemic. And now it’s become a full-blooded hobby or a gift or a trade or a business that they want to invest in,” he says.

He says he's even seeing a higher awareness, sophistication and passion among the contestants on “The Great British Bake Off,” which has filmed 12 seasons with no end in sight.

“It’s always been there, but it seems to be getting more and more heightened now. They’re just so knowledgeable about baking, which they just weren’t in season one and two,” he says. “They had an interest and they were good, but they just seem to be so much more knowledgeable now. And that blows my mind.”

Hollywood has also noticed that men are engaging more with baking, something he encourages. He also wants children to get their hands in the dough instead of spending time on their Playstations or Switches.

“The whole thing is about how delicate you are with some of the sponges and how deft you are with your touch to create something that looks and tastes amazing — that’s what baking is all about. I always find that it’s a very inclusive thing.”