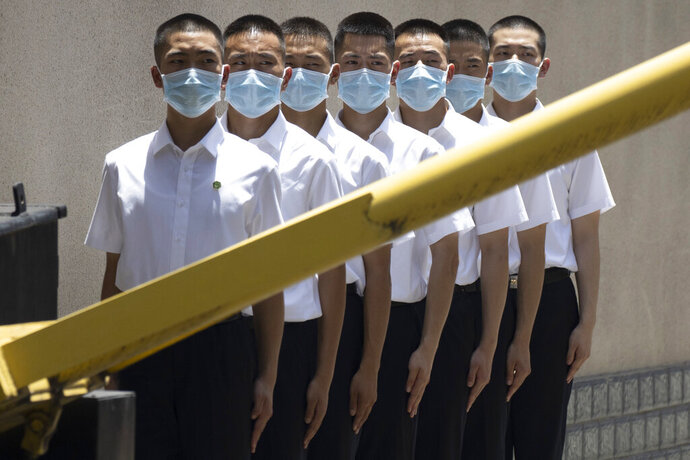 Security personnel wearing face masks line up outside the former United States Consulate in Chengdu in southwest China's Sichuan province on Monday, July 27, 2020. Chinese authorities took control of the former U.S. consulate in the southwestern Chinese city of Chengdu on Monday after it was ordered closed in retaliation for a U.S. order to vacate the Chinese Consulate in Houston. (AP Photo/Ng Han Guan) 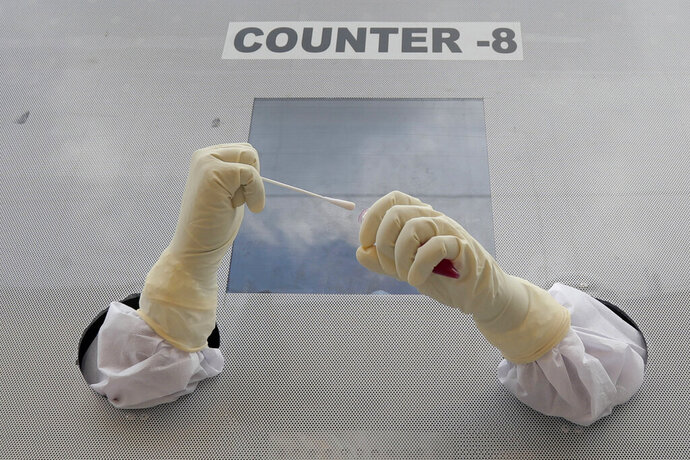 A health worker prepares to collect nasal swab samples for COVID-19 tests at a mobile testing site in Hyderabad, India, Friday, July 31, 2020. India is the third hardest-hit country by the pandemic in the world after the United States and Brazil. (AP Photo/Mahesh Kumar A.) 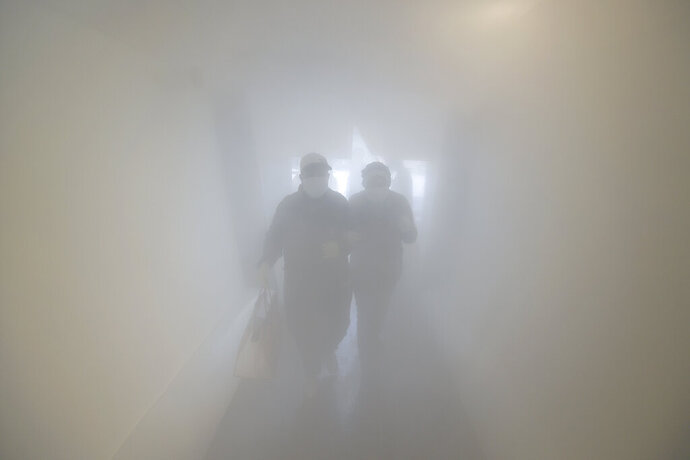 A couple wearing protective face masks walk through a decontamination chamber as a preventive measure against the spread of the new coronavirus, before entering a store in Caracas, Venezuela, Saturday, July 25, 2020. (AP Photo/Matias Delacroix) 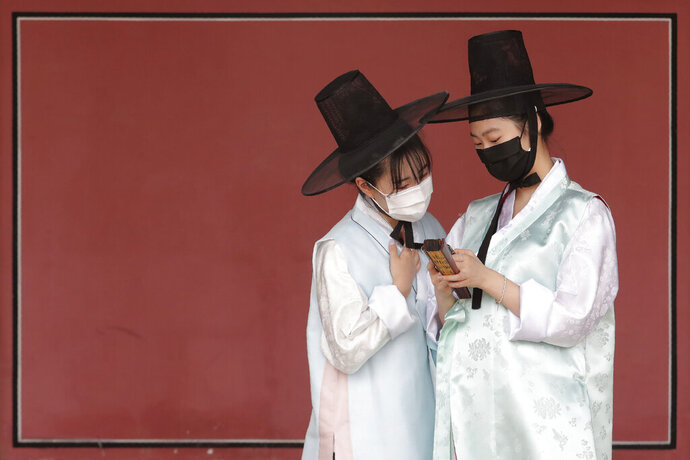 Women wearing traditional clothing and face masks to help protect against the spread of the new coronavirus look at a mobile phone at the Gyeongbok Palace, one of South Korea's landmarks, in Seoul, South Korea, Saturday, July 25, 2020. The country reported newly confirmed cases of COVID-19 over the past 24 hours, its first daily jump over 100 in nearly four months. (Photo/Ahn Young-joon) 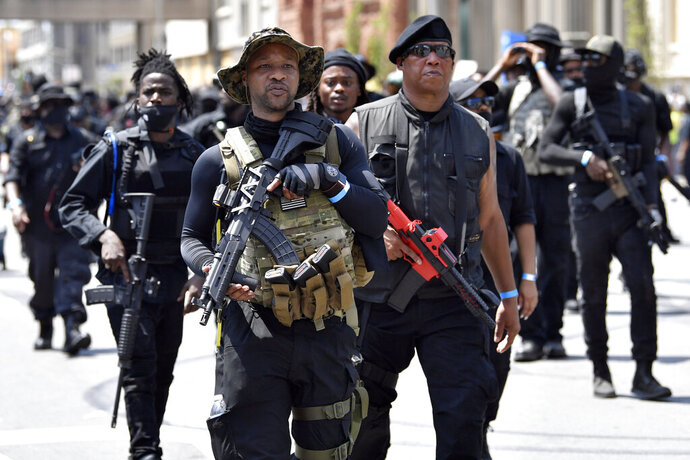 Armed members of the "NFAC" march through downtown Louisville, Ky., toward the Hall of Justice on Saturday, July 25, 2020. Hundreds of activists demanded justice for Breonna Taylor during the demonstrations in her hometown that drew counter-protesters from a white militia group. Taylor, a 26-year-old EMT, was fatally shot when police officers burst into her Louisville apartment using a no-knock warrant during an investigation. (AP Photo/Timothy D. Easley) 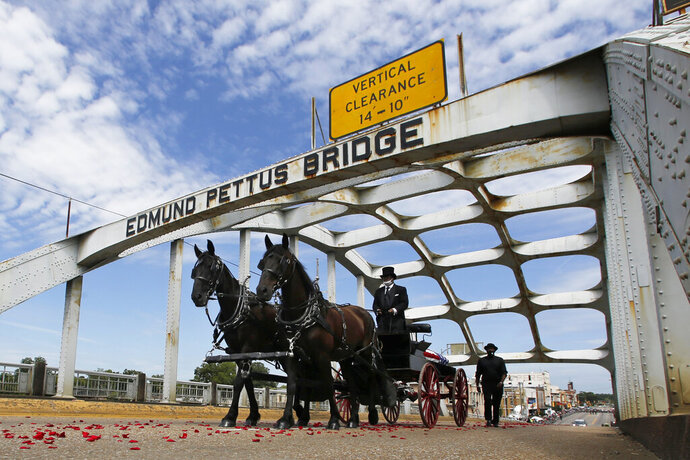 The casket of U.S. Rep. John Lewis, D-Ga., crosses the Edmund Pettus Bridge by horse-drawn carriage during a memorial service for the civil rights activist in Selma, Ala., on Sunday, July 26, 2020. Lewis, who carried the struggle against racial discrimination from Southern battlegrounds of the 1960s to the halls of Congress, died Friday, July 17, 2020. (AP Photo/John Bazemore) 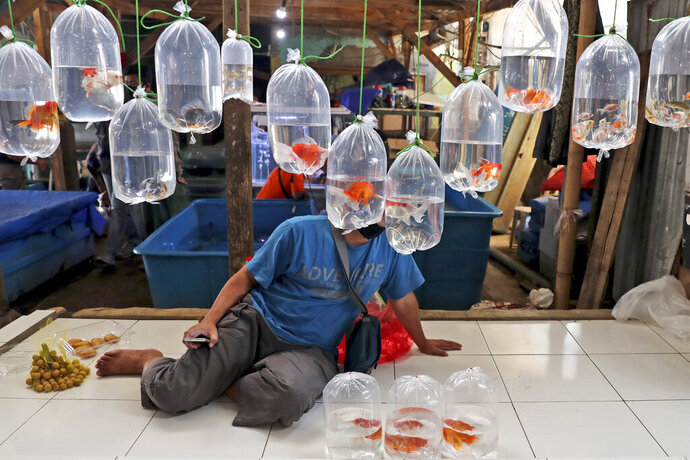 A vendor waits for customers behind bags of aquarium fish for sale at a market on the outskirts of Jakarta, Indonesia, Monday, July 27, 2020. The world's most populous Muslim nation is experiencing the highest number of confirmed coronavirus cases in Southeast Asia. (AP Photo/Tatan Syuflana) 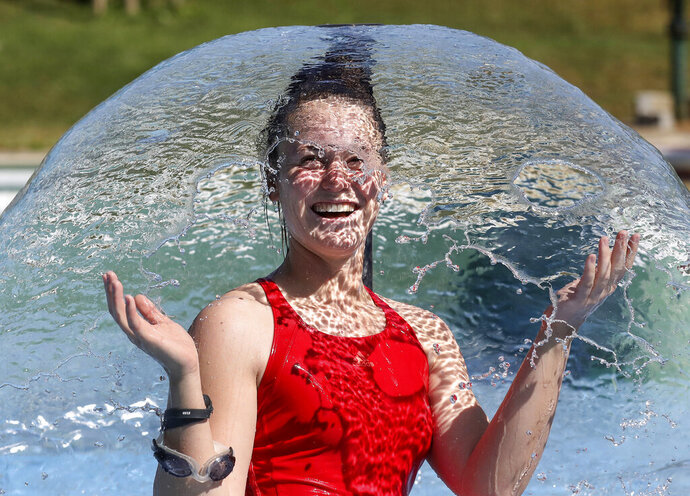 A woman laughs under an arc of water at a pool in Ehingen, Germany, Wednesday, July 29, 2020, amid summer temperatures. (Thomas Warnack/dpa via AP) 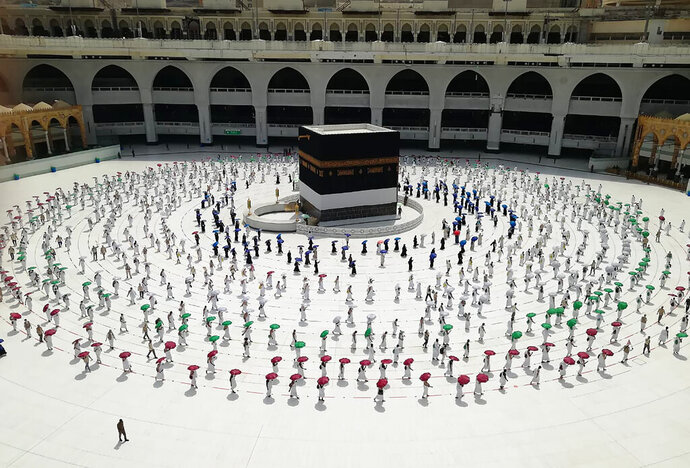 Hundreds of Muslim pilgrims circle the Kaaba, the cube-shaped structure in the Grand Mosque, as they observe social distancing to protect themselves against the coronavirus, in the Muslim holy city of Mecca, Saudi Arabia, Wednesday, July 29, 2020 During the first rites of hajj, Muslims circle the Kaaba counter-clockwise seven times while reciting supplications to God, then walk between two hills where Ibrahim's wife, Hagar, is believed to have run as she searched for water for her dying son before God brought forth a well that runs to this day. (AP Photo) 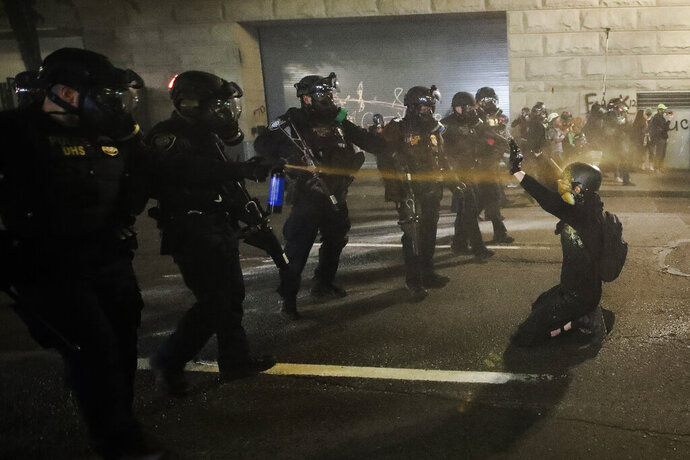 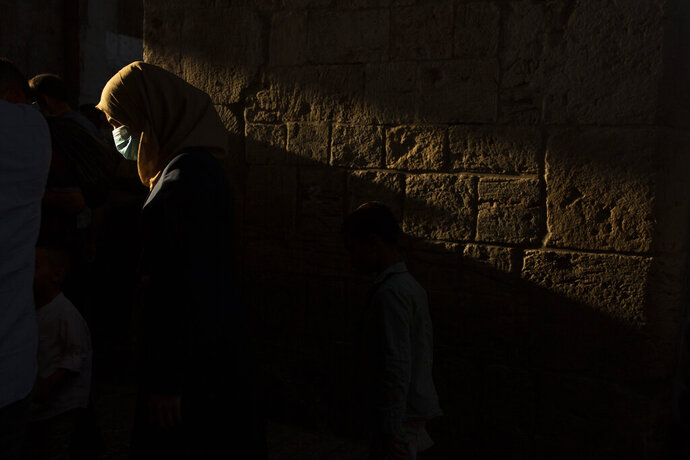 A woman wears a mask to help curb the spread of the coronavirus as she leaves prayers for Eid Al-Adha, or feast of sacrifice, in the Old City of Jerusalem, Friday, July 31, 2020. A key holiday on the Muslim calendar, Eid Al-Adha celebrations are somewhat subdued this year due to the coronavirus and the measures in place to curb its spread. (AP Photo/Maya Alleruzzo) 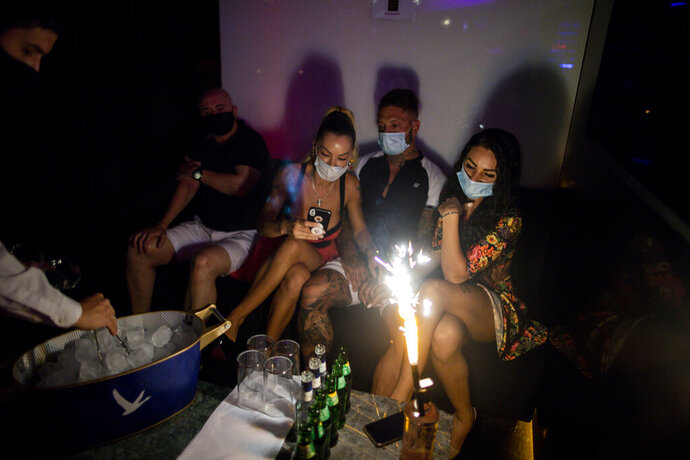 People wearing face masks to prevent the spread of coronavirus gather in a discotheque in Madrid, Spain, early Saturday, July 25, 2020. Nightlife is becoming the new target of Spanish authorities attempting to contain a spike in coronavirus infections since the country ended a lockdown. The Catalonia regional government has shut nightlife venues in Barcelona, and on Friday officials in Madrid said they were considering a similar step. (AP Photo/Manu Fernandez)