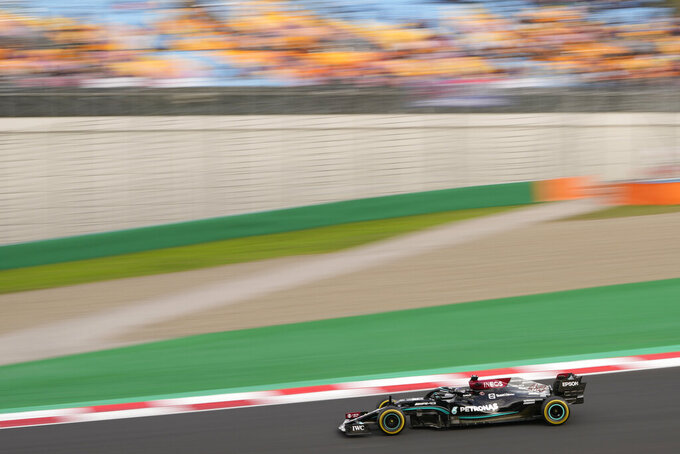 ISTANBUL (AP) — Racing with a new engine on Friday, Formula One champion Lewis Hamilton posted the fastest time in both practice sessions for the Turkish Grand Prix.

This season’s narrow championship leader led the first session ahead of title rival Max Verstappen and the second from Ferrari's Charles Leclerc, who drove impressively in both.

Hamilton came into the garage 10 minutes into the second run after complaining of a lack of grip on his front tires.

Once the issue was sorted the Mercedes star topped the leaderboard midway through P2. He finished it .17 seconds ahead of Leclerc and .41 ahead of teammate Valtteri Bottas.

Although conditions were dry at Istanbul Park, veteran Kimi Raikkonen got his feet wet when his drinks bottle leaked onto his boots. The 41-year-old Finn did not live up to his nickname “The Iceman”, using a string of expletives to describe the effects as he berated Alfa Romeo's mechanics.

Russian driver Nikita Mazepin, who like his Haas teammate Mick Schumacher has yet to score a point this season, lost control of his car and spun off near the end of P2.

There is a third practice on Saturday ahead of qualifying.

Earlier Friday, Hamilton placed .43 ahead of Verstappen and .48 clear of Leclerc, with Bottas fourth.

Hamilton leads Verstappen by two points with seven races to go including this one.

But that lead could well be lost on Sunday as Hamilton starts the race with a 10-place grid penalty for going over his allocation of three engines for the season. Mercedes fitted a fourth combustion engine on Friday.

The track proved much more reliable than last year, when it had just been re-laid to host an F1 race for the first time since 2011 and was too slippery.

Drivers complained about the 5.3-kilometer (3.3-mile) course in 2020, with Verstappen comparing it to an ice rink. He placed sixth in that race after qualifying in second spot, while Hamilton rose from sixth on the grid to win and clinch a record-equaling seventh world title.

Red Bull is powered by Honda engines, but the Japanese manufacturer is pulling out of F1 at the end of 2021. In honor of Honda, both Red Bull and feeder team AlphaTauri have special liveries on their cars for this race, which replaced the Japanese GP after it was canceled because of coronavirus concerns.

The Red Bulls used a predominantly white livery, inspired by the Honda that American driver Richie Ginther powered to victory at the 1965 Mexican GP.

Pierre Gasly and home favorite Yuki Tsunoda’s AlphaTauris had “Arigato” — Japanese for thank you — written on the rear wings.

Hamilton is bidding for an eighth world title, to surpass Michael Schumacher and stand alone among F1 greats. But Verstappen leads him 7-5 for wins this season and 7-3 for pole positions.