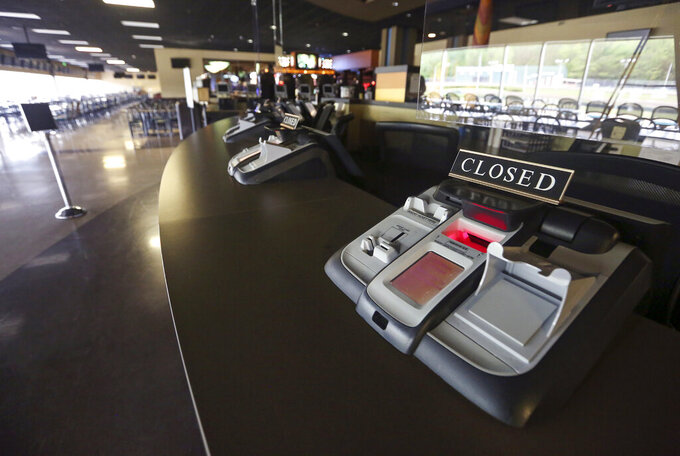 NICKI KOHL, ASSOCIATED PRESS
FILE- In this May 17, 2020, file photo, mutual betting lines are closed at Iowa Greyhound Park in Dubuque. Iowa Greyhound Park, the last remaining dog-racing park in Iowa, is closing amid a shortage of available greyhounds and the overall collapse of the racing industry. (Nicki Kohl/Telegraph Herald via AP, File)

DUBUQUE, Iowa (AP) — The last remaining dog-racing park in Iowa is closing amid a shortage of available greyhounds and the overall collapse of the racing industry.

The Iowa Greyhound Park in Dubuque is hoping for one last season in 2022, The Telegraph Herald reports. Plans call for it to be shortened, lasting just a month or two, compared to 112 days of racing this year, said Brian Carpenter, the park’s general manager and director of racing.

But he conceded that even that may not be feasible. Dogs that raced in Dubuque frequently split their time between Iowa Greyhound Park and tracks in Florida, allowing the dogs to race year-round. But in 2018, Florida voters approved a constitutional amendment to eliminate greyhound racing at the conclusion of the 2020 season.

The end of greyhound racing in Florida, which was long the epicenter of the sport, disrupted the industry and resulted in a dramatic drop-off in greyhound breeding.

“We don’t know if we will get enough dogs,” he said

But the park's days might have still been numbered even without a greyhound shortage.

For the past seven years, Iowa Greyhound Park has been propped up by subsidies that helped it continue to operate. In 2014, Dubuque’s Mystique Casino & Resort — now Q Casino and Hotel — and the casino in Council Bluffs reached a settlement allowing the casinos to sever ties with the greyhound industry. As part of this deal, Council Bluffs agreed to pay an annual $4.6 million subsidy to Iowa Greyhound Park through 2022, while Q Casino agreed to pay a yearly subsidy of $500,000 through 2021.

Carpenter acknowledged that these subsidies have allowed the park, which opened in 1985, to stay in the black. And without them, it won’t be feasible to turn a profit.

“We never did make it to a point where we could survive on our own,” he said. “We were heading in the right direction — every year we were going up but we were not where we needed to be. We just ran out of time.”

In recent years, Iowa Greyhound Park saw a sizable increase in wagering activity, due in large part to a massive rise in bets made on Dubuque races by those who are not physically in the park.

“We lasted longer than most people expected we would,” Carpenter said, reflecting on the park’s recent growth.