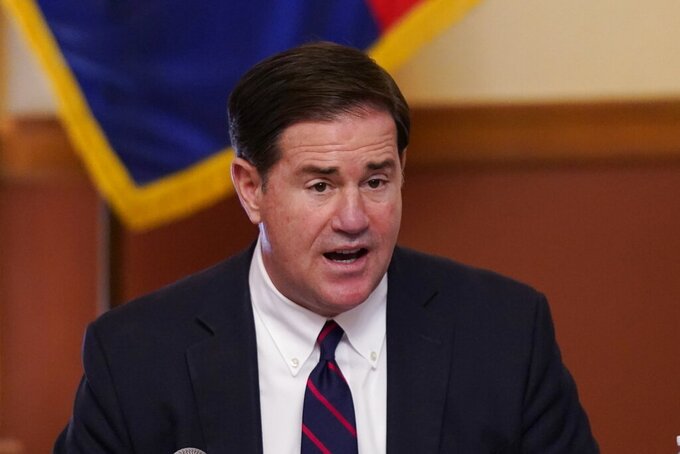 Ross D. Franklin, ASSOCIATED PRESS
FILE - In this Nov. 30, 2020, file photo, Arizona Gov. Doug Ducey speaks at the Arizona Capitol in Phoenix. A program announced by Arizona's Republican governor last month to give private school vouchers to students whose parents object to school mask requirements has seen a surge of applications, with twice as many either completed or started than can be funded with the $10 million in federal coronavirus relief cash he earmarked for the program. (AP Photo/Ross D. Franklin, Pool, File)

The lackluster award of vouchers the Republican governor has touted as a needed lifeline for parents who object to mask mandates and quarantines comes as some parents complain of poor responses from Ducey’s office. And records obtained by The Arizona Republic show some families awarded vouchers earn more than the threshold set by Ducey, at most 350% of the federal poverty level.

Ducey also faces major pushback from the federal government for what officials say is an inappropriate use of federal COVID-19 relief funds.

The U.S. Treasury Department told Ducey in an October letter that using $10 million for private school vouchers aimed at parents who object to virus mitigation efforts and giving $163 million to public schools if they do not have mask mandates are “not a permissible use” of the federal cash.

In the letter, Deputy Treasury Secretary Wally Adeyemo said the programs “undermine evidence-based efforts to stop the spread of COVID-19.” He asked the state to explain how it will “remediate” the problem within 30 days. Arizona is one of several states facing federal pushback for their use of COVID-19 money to back GOP policies.

Ducey is defying the Treasury Department’s demands, with his federal grant team manager insistin g the money was appropriately being used to help students harmed by school mask mandates. Treasury officials said last week that they were reviewing the response but reiterating the governor was misusing the money.

Arizona public school advocates have also blasted the governor's plans, saying they are an ill-advised use of federal virus money to fund vouchers that voters overwhelming rejected in 2018.

Ducey spokesman C.J. Karamargin defended the pace of the voucher awards, which he and Ducey’s education policy adviser had touted in early September as drawing more than 2,600 applications in its first 13 days, with 69 approved.

As of the end of October, however, only 24 additional vouchers had been approved. Parents have spent less than $50,000 through the program, records obtained by the Republic show.

Karamargin said the slow rollout shows the governor’s office has set up a “rigorous” vetting process that requires parents to prove their eligibility.

Over one-third of the children receiving the new vouchers are enrolled in online school, although Ducey said his goal was to get students back into regular classrooms.

Interviews with parents show a rocky rollout of the program that Ducey continues to defend. It was built on a law the state Supreme Court struck down and sought to thwart public health recommendations designed to slow the spread of COVID-19. The high court found the Legislature illegally inserted a ban on school mask mandates in the state budget.

A half-dozen parents complained about a lack of communication and being left without the money they were promised to pay their child’s tuition, child care, transportation or other costs. The Governor’s Office often just doesn’t respond to their emails, the parents said.

Scheer’s four elementary school-age children were approved for vouchers. Scheer and his wife moved the quartet from a Scottsdale Unified School District school that required masks to private Christian schools that did not.

But they haven’t received the funding because of issues with invoices, which are documented in a series of emails Scheer sent to the Governor’s Office that mostly went unanswered.

The program Gov. Doug Ducey created gives $7,000 per school year to each student who enrolled in a public school with either mask requirements or that requires unvaccinated children exposed to the virus to quarantine or isolate differently than vaccinated children. Applicants can earn up $92,750 for a family of four.

Ducey was criticized for offering a financial incentive for schools and families to dodge public health protocols like requiring masks. Others saw it as another attempt to expand private school vouchers, which voters overwhelmingly opposed in 2018.

Ducey has said he might put more money into the programs and recently suggested that changes were forthcoming to make more families eligible.

He said helping Arizona families “through good policy” was worth it, “but there’s a much larger market and demand for it” than what is shown by the Republic’s review.

Ducey said he was not aware of families having trouble communicating with his office and “there may be a gap we need to close there.”