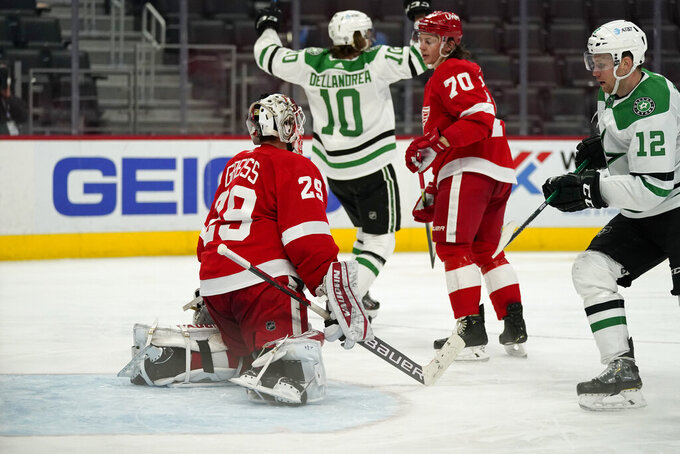 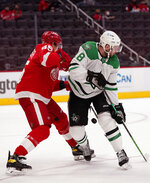 Andrej Sekera gave the Stars a two-goal cushion midway through the third period. A little later in the game, Khudobin denied Robby Fabbri on a breakaway and finished with his third shutout this season.

“That save, the whole bench erupted," Dallas coach Rick Bowness said. “When you’re talking about a timely save, that was it.”

The Stars sealed the win with 6:17 left, when Ty Dellandrea scored to make it 3-0.

The defending Western Conference champions, who have missed injured stars Tyler Seguin and Ben Bishop all season, had lost nine of their previous 12 games.

“We have to go on a little bit of a run," Dallas defenseman Jamie Oleksiak acknowledged.

It has been a long run since Kero scored, dating to 2017 with Chicago. The 28-year-old journeyman did not play in the league the previous two seasons and has been in and out of the Stars lineup, playing in 13 games this season.

“At this point, you appreciate every game you get in," Kero, who is from Hancock, Michigan, said after playing in his 85th NHL game. “You want to take advantage because you don’t know when the opportunity is going to come again or if it’s going to get taken from you.”

Detroit’s Thomas Greiss had 30 saves, filling in for injured goaltender Jonathan Bernier and his teammates didn't generate much offense at the other end of the rink.

“We’re not the only team that has struggled to score against that team," Red Wings coach Jeff Blashill said. “They are big, they play a good structure and they’ve got a great D corps."

The Red Wings had won three of four games twice in less than a month, but fell flat on a night on which they had a chance to win three straight for the first time this season.

“I felt like we’ve been taking a step in close games since I got back from injury," Detroit captain Dylan Larkin said.

Alexander Radulov, who has 12 points in 11 games for the Stars, missed the game with a lower-body injury, and Bowness said the Russian winger is day to day.

When it was clear on Friday that Bernier would miss at least a game with a lower-body injury, Detroit recalled goaltender Calvin Pickard from the AHL's Grand Rapids Griffins under emergency conditions and he became the team's backup.

Khudobin ranks among NHL leaders with three shutouts, blanking one team in each month this season to account for half of his six victories. He shares time with Jake Oettinger, who has one shutout this season.

“It’s always good when you have two goalies you can rely on," Oleksiak said.

Dallas plays Nashville in only one game at home on Sunday, less than 24 hours after playing in Detroit.

The Red Wings will have a couple days off, a luxury in the NHL this season, before playing the Predators on the road Tuesday night.