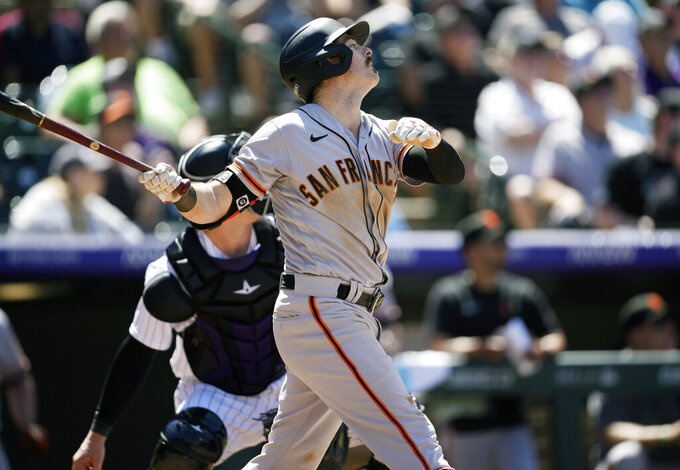 DENVER (AP) — C.J. Cron hit a tiebreaking two-run homer in a three-run eighth inning, and the Colorado Rockies stopped their 12-game losing streak against San Francisco by rallying past the Giants 5-3 on Wednesday.

Cron followed with a 454-foot drive to left on a 3-1 changeup for his 10th home run. It was the first homer allowed by Alvarez since May 29.

“It was huge,” said Cron, who hadn't homered since May 3. “We haven't been playing the best baseball recently, especially at home. So to be able to get that one today, especially against those guys — we haven't had much success against them either — it was a big game for us.”

Blackmon hit his 37th leadoff home run and Brendan Rodgers added an RBI single in the first for Colorado, which stopped a three-game skid overall.

Tyler Kinley (1-0) pitched a scoreless eighth, and Daniel Bard pitched a perfect ninth for his 10th save after blowing his last opportunity as the Rockies ended two seasons worth of frustration against San Francisco. The consecutive losses against one opponent had neared the Colorado record of 16 to Atlanta from 1993-94.

After walking two in the second, Webb got out of trouble and used a dominant slider to shut down the Rockies through seven innings with six strikeouts.

“He was cruising up to that point,” manager Gabe Kapler said. “It was a consideration to not have him go back out (for the eighth), but he felt good and we felt good about it."

Mike Yastrzemski, who entered 20 for 59 over the previous 17 games, was dropped to ninth in the Giants order against a lefty starter.

He delivered an RBI single in a two-run second and had a leadoff double and scored the go-ahead run on Darin Ruf’s sacrifice fly in the fourth.

Kyle Freeland needed 65 pitches through three innings but settled down to allow seven hits and strike out eight in six innings.

Blackmon pulled an 0-2 changeup to right in what was only the second homer allowed by Webb in 41 1/3 innings.

“I pride myself on even if I don't have great stuff to try to win the game,” Webb said. “And we didn't win the game. But there are some good takeaways from it.”

Giants: Tommy La Stella was out of the lineup against a lefty starting pitcher, but was feeling fine in his return from Achilles' tendon surgery, Kapler said.

Rockies: Kris Bryant (back) hit an opposite-field double, reached on an error, grounded out and struck out Wednesday as the DH in his second and last scheduled rehab game with Triple-A Albuquerque. Bryant, out since April 25, went 2 for 7 over the two games in Salt Lake City. “We're hopeful that he'll be back with us on Friday,” manager Bud Black said. The Rockies optioned RHP Ashton Goudeau to Triple-A after the game to open a roster spot.

Rockies catcher Brian Serven fouled off the first pitch in his first major league at-bat. And his mother ended up with the ball.

It landed just over the heads of the Serven family, and a fan nearby gave them the souvenir.

Serven went 0 for 2 in his debut before being pinch-hit for in the eighth. The 27-year-old California native was a fifth-round pick out of Arizona State in 2016.

A fan ran onto the field about an hour before the game holding what appeared to be hedge clippers or bolt cutters. He was subdued by security and later pinned against the wall in the tunnel beyond left field. Then a ball person picked up Thairo Estrada's fair ball down the left-field line and tossed it into the stands in the sixth. Estrada was given a double.

Rockies: In the midst of the team's season-long nine-game homestand, RHP Germán Márquez (1-3, 6.16) faces the NL East-leading New York Mets on Friday night. But rain — and later up to 6 inches of snow — are in the forecast through Saturday.