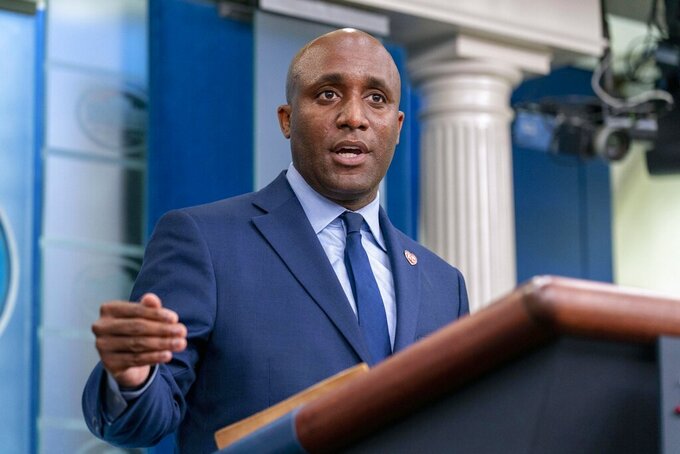 Andrew Harnik, ASSOCIATED PRESS
FILE - Kansas City, Mo., Mayor Quinton Lucas speaks during a press briefing at the White House in Washington on May 13, 2022. Lucas sued the state of Missouri Wednesday, Aug. 17, 2022 over a new law that requires the city to increase funding for its police department. (AP Photo/Andrew Harnik, File)

KANSAS CITY, Mo. (AP) — Kansas City Mayor Quinton Lucas sued the state of Missouri on Wednesday over a new law that requires the city to increase funding for its police department.

The lawsuit filed in Jackson County is the latest salvo in a lengthy dispute between some city leaders and GOP state officials over funding for the police department. Kansas City is believed to be the largest city in the nation that does not have control over its police force, an arrangement that critics contend is based on racism against the city's large Black population.

Currently, the department is run by a Board of Police Commissioners that includes the mayor and four members appointed by the governor.

In the latest lawsuit, Lucas is asking the court to stop enforcement of a law passed earlier this year that requires Kansas City to increase its funding for police from 20% to 25% of its general revenue.

Kansas City could have to reduce funding for other government services by more than $38 million if the law is enforced, according to the lawsuit.

“The radical legislation provides no pay guarantees for our officers, will not hire a single police officer, and ignores the will and importance of Kansas City taxpayers, instead attempting to politicize policing in Kansas City at a time we sorely need bipartisan solutions to violent crime,” Lucas said in a statement.

The Republican-led legislature passed the law without providing any state funding to cover the increase. The lawsuit contends the new law violates the Missouri Constitution, which includes a provision known as the Hancock Amendment that bans unfunded state mandates for cities.

Because of the concerns over the law's constitutionality, the legislature also passed a proposed constitutional amendment that would exclude state mandates for increased police funding from the Hancock amendment's restrictions. The proposal will be before Missouri voters in November.

Missouri Attorney General Eric Schmitt and the Kansas City Board of Police Commissioners are also named in the lawsuit.

Schmitt's spokesman, Chris Nuelle, said in a statement that Lucas “has yet again put politics over public safety.”

“The Attorney General’s Office will continue to support the brave men and women of law enforcement, and we will vigorously defend the laws of the state of Missouri in this case,” Nuelle said.

The legislature passed the law after Lucas and some city council members approved two ordinances that would have designated about $42 million of the police department's budget for 2021-22 for a special fund to promote community engagement and intervention.

The board sued and a judge later ruled the city council didn't have the authority to change the police department's expenditures.

Critics said the city council's move was a way to “defund” the police department, which city officials strongly denied.

State Sen. Tony Luetkemeyer, a Republican who represents counties in suburban Kansas City, was the main sponsor of the bill. He said on Twitter Wednesday that Lucas' lawsuit “is the latest effort by the city to continue its radical quest to defund the police. I’m confident (Schmitt) and the police board will do everything to defend the new law to keep our region safe.”