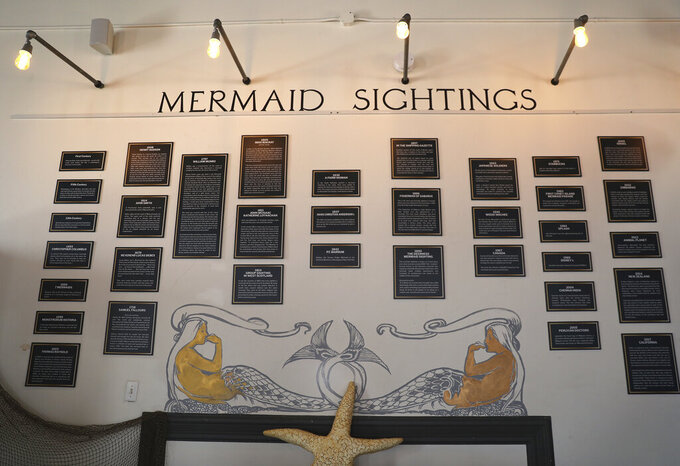 So Maloof, who has a deep interest in fine art, decided to turn her studio into a museum celebrating mermaids.

In the heart of downtown Berlin, Maryland, just 9 miles from the ocean, her museum reflects the image of the coastal city housing “all things mermaid.”

While Berlin itself isn’t a beach town and may be more known as a passing-by location to tourists driving to Ocean City, Maryland, its proximity to the ocean inspired Maloof to create a full-blown mermaid exhibition.

Deviating from the conventional idea of “The Little Mermaid,” visitors get a chance to view the mythical sea creature in a unique fashion. The museum exhibits the history of mermaids through their portrayal in different cultures along with some “tongue-in-cheek funny stuff,” according to Maloof.

Fulfilling what seems to be most children’s desire, the museum lets young visitors play dress-up in a pirate’s box, transforming them into little mermaids and mermen. It is a fun history lesson combined with a fictional playtime, according to Maloof. Her young son loves the mermaid tails and is a “full-fledged merboy,” she said.

While mermaids appear to be a childhood fascination, Maloof has found it appeals to adults, as well.

“People were thanking me for having an idea to create a mermaid museum because it was so much fun,” Maloof said. “They are thrilled with the idea of a fantasy museum.”

Mermaids are inextricably elite because they are all about mystery, Nancy Mitchell, a Salisbury poet laureate, said on the television show “Delmarva Life” while talking about the museum.

The myth of the mermaid is deeply ingrained in the human consciousness and has survived through the ages due to this mystery, hope and impossibility surrounding it, she said.

Maloof says there are deep ties between Berlin and the fictional marine beings. It displays found artifacts like “mermaid scales,” discovered on the Isle of Wight near Berlin, she said.

Referring to the “Fiji Mermaid,” a taxidermy mermaid people once thought was real and which was once displayed by P.T. Barnum, Maloof said the artwork is happier in the museum, being closer to the sea.

Mermaid culture is on view throughout Ocean City, where hotels hire professionals who don mermaid costumes to play with kids pool side.

The city also hosted a Renaissance Ocean Festival this summer.

Being a professional mermaid requires a lifeguard certificate, an apprenticeship and water skills such as scuba diving and being able to hold your breath, according to Tasha Haight, who was Miss Mermaid Delaware 2019 and 2020. She works with kids and is also a part of the Renaissance Ocean Festival.

“Mermaids bring magic and they bring a way to connect us to the ocean, the bay, rivers and other different waterways,” Haight said. “A lot of people tend to be scared of the water, and the ocean and mermaids are a way to help them get over that fear.”

Maloof plans on organizing a mermaid festival in Berlin with live mermaids. Everybody feels drawn to the ocean as it rejuvenates and refreshes you, and once you are here with the family it creates the magic of a vacation spot, she said.

Affinity to the ocean, the salty breeze and sound of waves crashing onto the beach attracts hundreds of tourists to Ocean City and other nearby coastal towns, and mermaids help create a mystical experience.