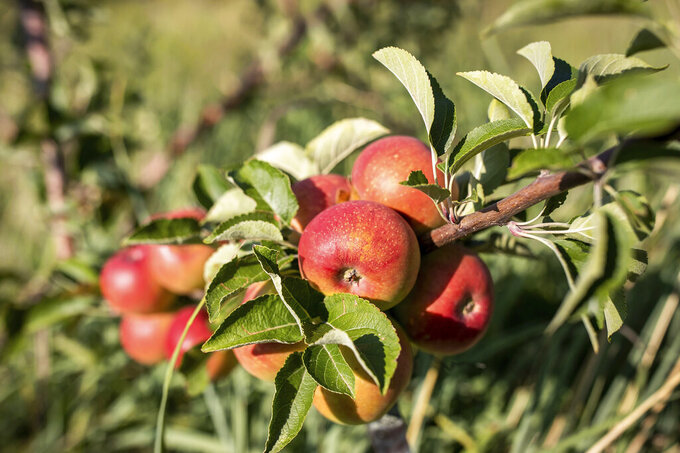 Hart Van Denburg, ASSOCIATED PRESS
In this Monday Aug. 30, 2021, photo, apples yet to be picked are shown on the branch at Montezuma Orchard up the McElmo Canyon west of Cortez, Colo. Jude and Addie Schuenemeyer founded the Montezuma Orchard Restoration Project in 2014, working to preserve every kind of apple grown in Colorado. (Hart Van Denburg/Colorado Public Radio via AP)

DENVER (AP) — The Montezuma Orchard Restoration Project can be described as many things: an agricultural project, an economic development project, a history project — even an apple scavenger hunt.

Jude and Addie Schuenemeyer founded MORP in 2014. It has several orchards in Montezuma County. The Schuenemeyers’ own orchard and nursery in McElmo Canyon grows more than 200 different apple varieties.

One of their main goals is to preserve every kind of apple grown in Colorado.

Sometimes that involves a treasure hunt — like the Schuenemeyers when he set out to find the Thunderbolt apple.

Jude Schuenemeyer said he’d originally seen it in a real estate guide for the Montezuma Valley from the early 1900s. The guide said it grew well on the land and was beloved by the people who lived there.

So he did some digging, talking to people who live in the area where it was grown.

He eventually found the Thunderbolt in the remnant of an old orchard, but it still took a while before they were able to confirm it was the real deal.

“We went and took cuttings and grafted all of them and then started growing them out here,” Schuenemeyer said, gesturing to his orchard where heritage apple trees are spaced far apart to give their root systems room to grow. “And over time we recognized one of those apples matched a Thunderbolt that we had gotten from a place north of Cortez.”

Jude Schuenemeyer is passionate about passing on Thunderbolt apples and the rest of Montezuma county’s fruit-growing legacy to future generations.

He’s also acutely aware that before settlers planted apple orchards in McElmo Canyon in the mid-1800s, Indigenous people who lived and practiced agriculture there were forced out. MORP now gives some of its trees to the Navajo Nation and Ute Mountain Ute Tribe.

MORP recently bought a mobile apple press, and Schuenemeyer hopes that will give fruit growers in Montezuma county a chance to supply juice to nearby cideries.

“The cider press gives us the ability now to take this fruit and really put it into a product that people can have and take and enjoy, and farmers can make money again with it,” he said.

The Montezuma Orchard Restoration Project also uses the history of apples in Colorado as a way to preserve the land and the crops for the future. They plant trees in the hopes that the trees will last a hundred years into the future. And they want to do it in a sustainable way.

“Any time, any place that we can get orchards going and get trees in the ground, we feel like we can help people,” Schuenemeyer said. “Every time we get to dig a hole, we feel like we’re impacting the future in a positive way.”