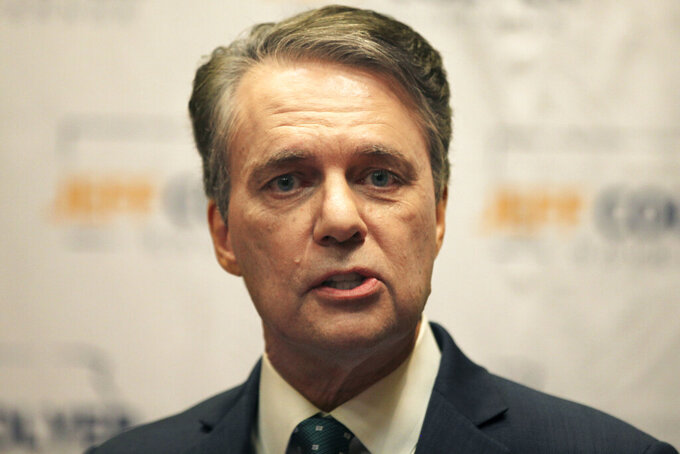 John Hanna, ASSOCIATED PRESS
FILE - In this April 19, 2021 file photo, former Kansas Gov. Jeff Colyer formally launches his campaign for governor in 2022 in Topeka, Kan. Colyer announced Monday, Aug. 30 that he is dropping out of the 2022 race for governor after being diagnosed with prostate cancer. Colyer was governor for a little less than a year, elevated from lieutenant governor in January 2018 when GOP Gov. Sam Brownback resigned to become U.S. ambassador at large for international religious freedom. (AP Photo/John Hanna, File)

MISSION, Kan. (AP) — Former Kansas Gov. Jeff Colyer announced Monday that he is dropping out of the 2022 race for governor after being diagnosed with prostate cancer.

“While I have always focused on helping others, for the next few weeks I am going to focus on my health," said Colyer, a physician who served as governor for a little less than a year in 2018.

In his announcement, Colyer said he was endorsing Attorney General Derek Schmidt in the governor's race. Colyer had been Schmidt’s main rival for the Republican nomination to challenge Democratic Gov. Laura Kelly’s reelection.

Schmidt wished Colyer “all the best in overcoming his current health challenges” in a written statement and said that “now is the time to come together to elect a Republican governor for Kansas next year.”

In a tweet, Kelly wished Colyer “a quick recovery.”

“Colyer and I may have our disagreements. But one thing we can all agree on: the need to defeat cancer,” the tweet said.

Colyer's withdrawal from the governor's race leaves Schmidt as the frontrunner. Schmidt, who has been attorney general since 2010, had already received endorsements from former U.S. Sens. Bob Dole and Pat Roberts.

“It is like the end of a primary that really didn’t happen," said political scientist Bob Beatty, of Washburn University in Topeka. “It restarts the Republican primary with a very powerful frontrunner, and it completely reshapes the entire governor’s race right now. We went from a battle of political giants to now one candidate standing atop the hill looking to see if anyone wants to take him on."

University of Kansas political scientist Patrick Miller said if other Republicans want to run, they need to decide quickly.

“There is room,” Miller said, “but that door is going to close sooner rather than later.”

Kansas Republican Party Chairman Mike Kuckelman said that he hadn't heard of any other potential GOP candidates and said he doubted that Colyer's departure would change that. He said his expectation is that the party will “unify very quickly" behind Schmidt.

David Kensinger, a Colyer adviser who ran successful statewide GOP campaigns in Kansas and was a consultant for Vice President Mike Pence when Pence won the Indiana governor’s race in 2012, said he has spoken to Colyer since his diagnosis. He said Colyer is “strengthened very much by his faith in God and by his wonderful family."

“The focus," he said, “needs to be on him getting well, and I think he still has a lot to offer in public service.”