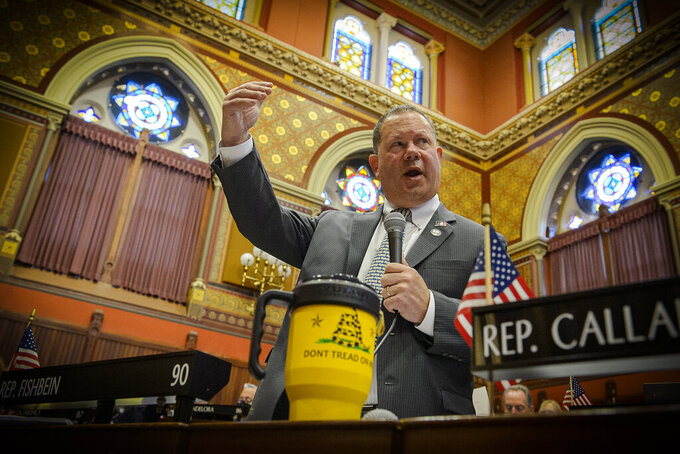 Mark Mirko, ASSOCIATED PRESS
Craig Fishbein, the highest ranking Republican on the Judiciary Committee, speaks during House debate on a bill to legalize the recreational use of marijuana, Wednesday, June 16, 2021, in Hartford, Conn. (Mark Mirko/Hartford Courant via AP)

HARTFORD, Conn. (AP) — Proponents of legalizing the adult use of marijuana in Connecticut dodged a threatened veto on Wednesday, advancing a revamped bill that Gov. Ned Lamont supports by a narrow vote in the House of Representatives.

“Connecticut’s time has finally come," said Rep. Steven Stafstrom, D-Bridgeport, co-chairman of the General Assembly’s Judiciary Committee. “We take the next step, as this chamber, in recognizing the war on drugs has failed us and the criminalization of cannabis was the wrong course of action for our state and for our nation."

The Democratic controlled House voted 76-62 in favor of a nearly 300-page bill that sets the stage for a new, legalized market as early as the spring of 2022. A dozen Democrats joined all but one of the Republicans in opposition. Ultimately, the House approved the same deal that leaders of the House and Senate recently reached with Lamont, stripping a contentious section about “social equity” applicants for marijuana licenses that was added at the eleventh-hour in the Democratic controlled Senate on Tuesday.

Lamont had threatened to veto the Senate's version of the bill, arguing it would open up the industry and give preference to tens of thousands of people with a history of cannabis crimes, or members of their families, regardless of their financial means.

“This last-minute amendment creates equity in name only by allowing these individuals expedited opportunity to obtain access to the marketplace,” Paul Mounds, Lamont's chief of staff, said in a statement issued shortly before the Senate's vote. Proponents said they disagreed with that assessment, but decided to instead return to the deal reached originally with Lamont.

Proponents said they wanted the language added to the bill to make sure people with criminal records, particularly marijuana-related offenses, would be able to participate in the new legalized industry in an effort to promote economic equity.

“When the governor said he’d veto the bill. I think that’s what made everybody say, ‘Well that’s a game changer,’” said House Speaker Matt Ritter, D-Hartford.

As in previous debates, opponents cautioned about the ramifications of Connecticut following the path of other states that have legalized cannabis. One by one, they warned it will send a harmful message to children and will lead to higher addiction rates and more car crashes.

“I have no question in my mind this is a mistake for the state of Connecticut,” said House Minority Leader Vincent Candelora, R-North Branford.

Rep. Holly Cheeseman, R-East Lyme, who told an emotional story about how her late husband died in a 2012 crash, begged her colleagues to “hit the pause button” on the bill and come up with another way to address the inequities of the war on drugs — a key motivator for many supporters.

“If we feel that opportunities are needed in our cities, let’s work on that. But please, this is not the way. This is not the way when we know what the result is going to be,” Cheeseman said. “I don’t want to have to look in the face of a family and know I took a vote that may have created heartache and pain and took away a future."

But Rep. Juan Candelaria, D-New Haven, who has been working to pass a legalization bill for years, insisted the proposal, which he said will highly regulate the substance and make sure it's safe, is needed now more than ever.

Wednesday's debate at the state Capitol was happening in a special legislative session, one week after the General Assembly adjourned its regular session without the House voting on marijuana legalization. The Senate is now expected to vote again on the issue on Thursday. It will be the third time senators will have voted on cannabis legalization.

Under the bill, it will be legal for individuals 21 and older to possess and use cannabis beginning July 1. A person would be allowed to have up to 1.5 ounces, with an additional 5 ounces secured in their home or vehicle. Retail sales of recreational cannabis in Connecticut are not expected to begin until May 2022, at the earliest.

Besides the cannabis legalization bill, the House was expected to vote on a bill that's more than 800 pages and spells out details of the newly passed two-year $46.3 billion state budget, among other provisions. Ritter said some changes will be made to that bill as well, requiring another vote by the Senate.