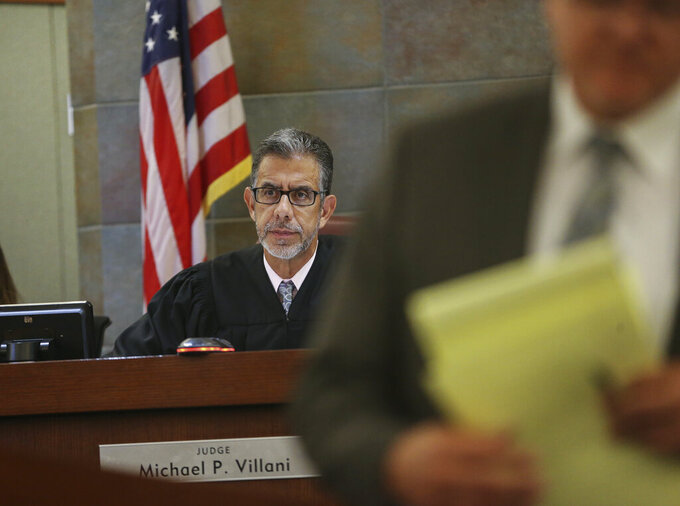 Erik Verduzco, ASSOCIATED PRESS
FILE - In this June 18, 2019, file photo, U.S. District Judge Michael Villani, center, listens in the State of Nevada case at the Regional Justice Center in Las Vegas. A day after Nevada Gov. Steve Sisolak and the top Democrat in the Legislature declared efforts to repeal the state's death penalty law dead, Villani on Monday, May 10, 2021, pushed back to June 4 a hearing on the district attorney's request to set a late July date for the lethal injection of Zane Michael Floyd. Floyd, 45, would be the first convicted killer put to death in Nevada since 2006. (Erik Verduzco/Las Vegas Review-Journal via AP, File) 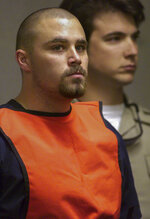 LAS VEGAS (AP) — A state court judge said Friday he won't disqualify the district attorney in Las Vegas from handling a bid to set the execution date for a convicted Nevada mass murderer.

A defense attorney for condemned inmate Zane Michael Floyd said they will appeal to the Nevada Supreme Court.

A day after Gov. Steve Sisolak and the top Democrat in the Legislature declared efforts to repeal the state’s death penalty law dead, Clark County District Court Judge Michael Villani also pushed back to June 4 his hearing of the district attorney’s request to set a late July date for Floyd's lethal injection.

Floyd, 45, would be the first convicted killer put to death in Nevada since 2006.

An appeal by his attorneys, deputy federal public defenders David Anthony and Brad Levenson, could slow the pace of Floyd's legal fights against his death sentence in state and federal courts.

U.S. District Judge Richard Boulware II has said he might stop the proceedings in federal court long enough to review the constitutionality of Nevada’s untested lethal injection method and the as-yet-undisclosed drugs prison officials would use. Boulware will hear more about Floyd’s case next Thursday.

Before Villani on Friday, Anthony and Levenson accused Clark County District Attorney Steve Wolfson of scheduling his request for a judge to issue Floyd’s death warrant for political reasons — to influence the death penalty debate in the Legislature.

They asked the court to appoint a third-party prosecutor instead.

Wolfson, Cannizzaro and Scheible did not immediately respond Friday to messages seeking comment.

Sisolak, a Democrat, said Thursday he believes capital punishment should be used only in “severe situations.”

Floyd, 45, was sentenced in 2000 to die for the shotgun killings of four people and the wounding of a fifth at a Las Vegas supermarket in 1999.

Levenson told Villani the repeal bill passed the state Assembly but never got a Senate hearing. He accused the Senate leaders who work for Wolfson, Cannizzaro and Scheible, of being “two people who stood in the way.” He suggested their non-Legislature jobs were on the line.

“If they didn’t do what they were supposed to do, would they be invited back?” he asked.

The judge issued a written finding to the court record saying he was satisfied that Cannizzaro and Scheible were on leaves of absence from Wolfson’s office and that while serving in the Legislature they were “not under the control of” Wolfson.

“The court finds that under the present scenario there is not a separation of powers violation,” he said.

Levenson read into the court record a quote Wolfson provided to the Las Vegas Review-Journal for a March 26 report about his call to execute Floyd.

“I think the timing is good,” Wolfson said. “Our legislative leaders should recognize that there are some people who commit such heinous acts, whether it be the particular type of murder or the number of people killed, that this community has long felt should receive the death penalty.”

“We would be moving forward with the Zane Floyd efforts at obtaining the order and warrant of execution notwithstanding the Legislature,” Wolfson said at the time. “I’m not purposefully moving forward with Floyd because of the Legislature. But because they’re occurring at the same time, I want our lawmakers to have their eyes wide open because this is a landmark case. They need to be aware that there are these kinds of people out there where the jury has spoken loudly and clearly.”

Levenson told Villani that Nevada residents and his client “deserve the assurance that the lawyers representing the state who are seeking Mr. Floyd’s execution ... are doing so fairly and not to further an agenda to manipulate the other branches of government.”