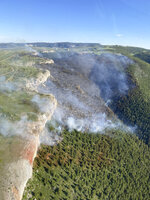 BILLINGS, Mont. (AP) — A Montana firefighting agency temporarily grounded its aircraft for a safety review after a helicopter crash landed and burned in heavy winds.

An agency spokesperson said the safety review was completed. But the results including whether any other factors played a role in the crash were not being made public immediately, spokesperson Paige Cohn said.

Officials said the fire season was off to an early start, after more than two dozen new fires began this week across the state.

Minor injuries were reported among the five agency personnel aboard the Bell UH-1H (Huey) helicopter that crashed near a roadway while involved in a fire east of Townsend on Tuesday.

The results of the state's investigation will be given to federal aviation officials.

The helicopter that crashed was one of two the agency deployed to help fight the fire near Townsend, which has burned 7 square miles (18 square kilometers) and destroyed a house, a cabin and 6 outbuildings.

One non-state helicopter was already in use on the blaze, and four more arrived Wednesday, said Erin Fryer with the Helena-Lewis and Clark National Forest.

“We worked through it just fine,” she said. “The nice part is it's early in the season, and we have access to more resources than we would normally.”

Natural Resources agency spokesperson Paige Cohn said the temporary grounding of its aircraft would not have "any significant effect on our ability to carry out our mission critical duties.”

The largest fire in the state, burning southeast of Red Lodge near Yellowstone National Park, destroyed eight houses and other buildings, and 13 outbuildings and other structures, officials said.

The human-caused fire, in the Robertson Draw area along the state line with Wyoming, has burned more than 37 square miles (97 square kilometers). Its advance slowed overnight Wednesday after the fire exploded the previous day amid record heat and strong winds.

Some evacuation orders were lifted, but they remained in effect in rural areas southeast of Red Lodge. Parts of the Custer-Gallatin National Forest remained closed.

No natural resource agency aircraft have been used in the fire, said Custer-Gallatin National Forest spokesperson Amy Hyfield, adding that she's heard no concerns that the grounding of its fleet affected the response.

Officials have not released further details on how the fire started, and it remains under investigation by law enforcement.