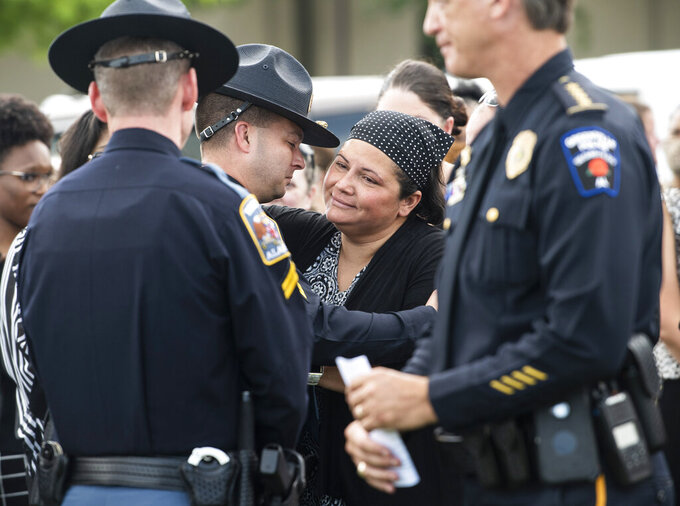 Jake Crandall, ASSOCIATED PRESS
Candice Gulley is greeted by Alabama State Troopers following a prayer vigil for the eight Alabama children that died in a June 19 crash on I-65 at Church of the Highlands in Auburn, Ala., on Thursday, July 15, 2021. Gulley was the sole survivor of a passenger van that crashed June 19 that killed eight Alabama children including two of her own. (Jake Crandall/The Montgomery Advertiser via AP)

MONTGOMERY, Ala. (AP) — The driver of a girls home van in which eight children died in a fiery interstate crash in Alabama has filed suit against trucking companies based in California and Georgia and a driver, her lawyers said Monday.

The federal lawsuit, which seeks an unspecified amount of money, recounts a desperate attempt by the woman, Tallapoosa County Girls Ranch director Candice Gulley, to free victims from the wreckage. Two of her own children and two nephews were among those killed.

Pulled from the crumpled van by others, Gulley ran around trying to help children escape the burning vehicle, the suit said, but no one could be saved because of the flames and damage.

“All the children were killed by the fire,” said the suit, filed Friday.

Eight children ranging in age from 3 to 17 died in the van, and the suit said Gulley suffered burns, bruises and severe emotional and mental distress. A Tennessee man and his daughter died in a separate vehicle in the crash, which happened on Interstate 65 as remnants of a tropical storm crossed the region on June 19.

The lawsuit names the California-based Hansen & Adkins Auto Transport and Asmat Express of Clarkston, Ga., which both were identified by the National Transportation Safety Board as being involved in the crash. It also named an Asmat driver identified as Mamuye Ayane Takelu.

While Hansen & Adkins has declined comment on details of the crash, Asmat has not responded to messages seeking comment. Neither company nor the driver filed immediate responses in court.

Besides Gulley and her husband Tommy Gulley, who lost two children, plaintiffs include the parents or personal representatives of four other children killed in the van.

Gulley was driving the van in the left lane on northbound Interstate 65 when the Hansen & Adkins truck failed to stop in traffic, struck a sport-utility vehicle and swerved into her lane, the suit said. The van was then struck from behind by the Asmat Express truck, it said.

The suit claims the trucks weren't outfitted with anti-crash safety technology and that drivers were going too fast, distracted or following too closely. An attorney for Gulley, Greg Allen, said the wreck “should never have happened.”

“We cannot erase or change the disastrous outcome, but we can work to provide answers that will allow a court to hold the defendants accountable for the lives they have devastated,” he said in a statement released by Beasley Allen Law Firm in Montgomery.

A preliminary report by the NTSB described the crash similarly to the lawsuit but did not place blame or say what caused the wreck, which happened about 35 miles (56 kilometers) south of Montgomery.