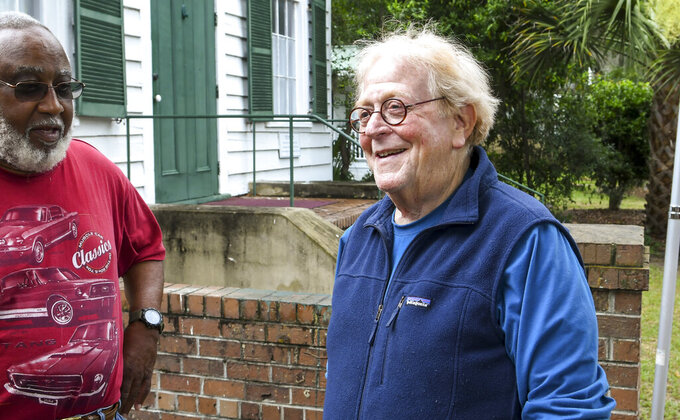 BEAUFORT, S.C. (AP) — Former Beaufort Mayor Billy Keyserling says he has a new perspective on life after nearly drowning six weeks ago in a sailing accident on the Beaufort River, and new mission: promoting CPR training.

Keyserling was basically a goner when people reached him May 12 after the cat boat he and his brother Paul were sailing May 21 in the Beaufort River tipped in a gust of wind, sending both men into the water.

“I was blue,” Keyserling said. “My eyes were just sort of staring into nowhere. Totally unresponsive to anything. No pulse. But that team just wouldn’t quit.”

Or at least that’s what he’s told.

Keyserling doesn’t remember people pulling him from the river, rushing him to land and resuscitating him.

“No pain,” Keyserling says, “no struggle, no memories of anything.”

Keyserling’s spoke to the newspaper on his 74th birthday. His face was ruddy; he was grateful to be alive.

That team — passersby in two motorboats, including, luckily, a nurse, and later firefighters and EMTs and Beaufort Memorial Hospital employees — are credited with bringing Keyserling back from the brink.

Two weeks after nearly drowning, Keyserling met with firefighters who were involved in his rescue.

“I got very teary and I said, ’I was dead,” Keyserling recalled. “I’m alive two weeks later. Look at me. It’s because of you.”

It was an emotional meeting for everybody. But one of the firefighters said something Keyserling says he will never forget. What the former mayor did not realize, the firefighter said, was that they train each day to save people, but they can’t save everybody.

"'It makes us feel good that all the training and everything we do worked,’” said Keyserling, recounting what the firefighter told him. “‘It does something for our morale to have a win. And taking somebody who is totally blue, with no sign of life and (being) able to bring them back, makes what we do that much more important to us.’”

Keyserling, a life-long Beaufort resident, says he’s been recreating on the water alone since he was 7 and never has been trained in CPR, despite seeing countless advertisements for training over the years.

“Had I been in the power boat and come across the distressed sailor who was in my condition, would I have been equipped to do what they did for me?” he says.

As a result of his experience, Keyserling says he plans to promote the idea of bringing boaters together, perhaps once a year, for CPR training. It’s criminal, he says, that “we have this water and we use it but we’re not aware of what it can do — and what we can do to make it safer for other people.”

Keyserling spent three days in the hospital. Ten ribs were broken in the process of getting water out of his lungs and restarting his breathing. For five weeks, he slept in a recliner because of the pain.

Once he got off the pain medication, and his head began to clear, he realized he had to drop all of the things he typically worries about and just take care of himself. He kept it simple: No. 1 was keeping his oxygen concentration at 95%. No. 2 was getting up and walking a little bit. No. 3, eat. No. 4, get some sun.

“That’s how you make it through the first three or four days,” Keyserling says.

Given it hasn’t quite been six weeks since the rescue, Keyserling calls his recovery “remarkable.” His ribs are healing. He’s getting his lung capacity back. “I’m surprised every day,” he says.

The experience affirmed his belief in humanity “but specifically Beaufort.”

“At the same time a huge gust of wind came from absolutely nowhere and just knocked us down,” Keyserling says.

He remembers the boat being on its side and halfway underwater. Keyserling said he went under to try to grab a line with the thought that he could give the line to one of the boats that had arrived to help. “And that’s the last thing I remember until I woke up in the hospital.”

Keyserling had already served on the City Council — and two terms as a state representative — before he was elected mayor in 2008 and reelected in 2012 and 2016. He left office in 2020 but hasn’t slowed down. Now he’s involved with a not-for-profit called Second Founding of America: Reconstruction Beaufort, whose mission is telling the untold stories of the Reconstruction Era, which includes restoring and conserving historic structures from that period.

All of his life, Keyserling says, he’s given “150% in everything I’ve done.” But now, he says, he wants to spend more time with his friends, maybe those he hasn’t seen in a few years, and traveling to places he’s never experienced before. “It’s not going to prevent me from doing what I needed to do,” he says of reserving more time for his personal life.

Keyserling visited the Grand Army of the Republic Hall on Newcastle Street one day earlier this week with former Beaufort County Coroner Ed Allen. Built in 1896, its one of the historic structures Keyserling’s group is involved in preserving. Allen kidded Keyserling about the sailing accident, saying he survived because he still has work to do.

“You were too bad to go to hell,” Allen said, “and not good enough to go to heaven. So right now, you’re still with us.”

For now, Keyserling plans to take a break from sailing — and smoking.

For years, he says, he’s been looking for an excuse and the courage to quit smoking. Part of his recovery includes breathing exercises using a “bubble blower.”

“I guess I’ve come to realize no one’s immortal,” he says. “And there are many things we’d like to see in the world change, that no matter how hard we work on them, how much we dedicate ourselves to, there’s only so much we as individuals can do.”