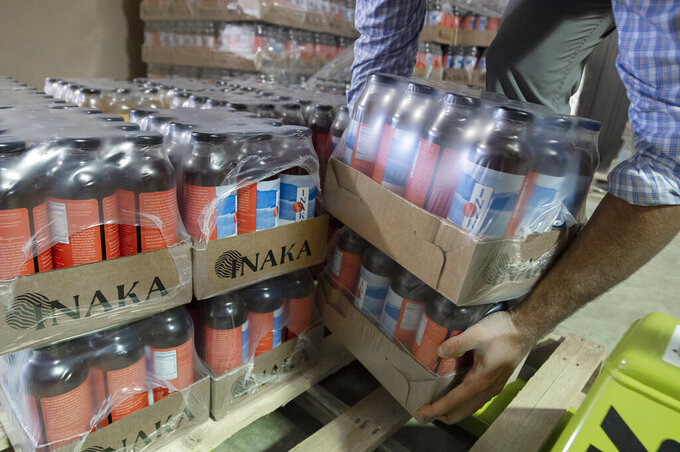 Barbara Gauntt, ASSOCIATED PRESS
Chat Phillips, owner of the Inaka Tea Company, works at his distribution center in Gluckstadt, Miss., Monday, July 12, 2021. Phillips said his tea was initially sold in Corner Market stores, which include Jackson and Hattiesburg locations, and a few tea shops in 2020. Now it is also carried by Claiborne Hill Supermarket, with locations in Southwest Mississippi, and Kroger. In July, expansion started into Memphis. (Barbara Gauntt/The Clarion-Ledger via AP)

“We’re the only U.S.-based company brewing and bottling barley tea,” said Chat Phillips, owner of Inaka Tea Company. “It has a lot of that coffee-like flavor, but not as bitter or strong. I describe it as almost between a tea and a coffee.”

Inaka teas are available throughout much of Mississippi and some Memphis locations.

Phillips said his tea was initially sold in Corner Market stores, which include Jackson and Hattiesburg locations, and a few tea shops in 2020. Now it is also carried by Claiborne Hill Supermarket, with locations in Southwest Mississippi, and Kroger.

In July, expansion started into Memphis.

“We sent some cases to Miss Cordelia’s Market,” Phillips said. “It’s a local store. We have them in East Memphis Krogers, too.”

In addition to retail locations, Inaka teas are available online. However, Phillips said that’s not the same as having his products in brick and mortar stores. If expansion of a regional footprint proves successful, he wants to market his products nationally.

“That’s the goal,” Phillips said. “We need to get our products into as many stores as we can.”

A GROWING MARKET FOR LOCAL PRODUCTS

Inaka teas are currently brewed and bottled in Texas and warehoused in Gluckstadt. Phillips hopes to bring production to the Jackson area as the business grows, which he said would create a handful of jobs. Right now Phillips, and his wife when she has time to assist, he said, run the company.

Grocery distributor Robert Crouch, owner of R. B. Crouch and Associates Inc. in Pearl, said about 75% of the products he distributes are Mississippi-based like Phillips’ and the climate for them is good.

“It just continually grows. That’s good for us. If you go into Kroger you’ll see ‘Discover Local’ signs. Kroger really pushes that and these independents (grocery stores) are starting to push it, too.”

Jeff Rent, CEO and president of the Greater Jackson Chamber Partnership, said the support Inaka Tea Company is receiving is not surprising as people realize local businesses are economically important.

“Jackson and the Jackson area is open for business and the community is very supportive of businesses and especially new businesses,” Rent said. “If we support local businesses, we’re going to have healthier, more vibrant communities.

“That has a spillover effect. You’re creating new jobs. This one little idea that Chat got from living overseas and Chat starting it here just shows this is a place where you can succeed.”

So, where did Phillips get the idea to brew and bottle tea that no one else does in the U.S.? It was an unlikely path and it started on a catfish farm in rural Yazoo County where he grew up.

“In many ways it was great,” Phillips said. “I grew up with a twin brother and a little sister.

“We found ways to entertain ourselves outdoors. We were climbing trees and catching frogs. I feel like we were the last people to have that Huckleberry Finn lifestyle growing up.”

Phillips, however, knew there was a bigger world out there and he wanted to experience it. He attended the University of Puget Sound in Tacoma, Washington, where he majored in politics and economics with a minor in, of all things, Japanese.

“I had taken French in high school and I wanted to learn something new,” Phillips said. “It was just sort of a pick. There was no rhyme or reason to it.”

Phillips went to Japan during his college days through a study abroad program and realized that Mississippi didn’t have the market cornered on blistering heat and humidity. He also learned Japanese people seek relief from the heat much like many Mississippians. They drink tea, except some is made from roasted barley.

“My host family gave me some tea and I instantly fell in love with it,” Phillips said.

‘I DECIDED TO QUIT MY JOB AND TAKE THE PLUNGE’

Phillips said learning to speak Japanese drove his career in economic development and he continued to travel to Japan for business. He also began making mugicha tea at home, only he added some roasted corn kernels to the mix for a hint of sweetness, something he learned from his host family in Japan.

After brewing grain-based tea at home and letting friends try it, he decided to take the next step.

“We had some money saved and I decided to quit my job and take the plunge,” Phillips said. “I quit my job in 2019 and started doing this full time.”

He chose Inaka for the name because it is a Japanese word that roughly translates as a blend of “hometown” and “countryside.” Since he grew up in the country and first tried the tea in the countryside of Japan, it seemed like a natural fit.

Inaka Original is made from roasted barley with roasted corn added for sweetness. Phillips also created other teas based on roasted grains to create a line of offerings.

Inaka Mint is brewed from roasted corn and barley along with mint and organic cane sugar is added. Inaka Ginger is brewed with roasted corn, a traditional Korean tea, with Phillips’ addition of ginger for a gluten-free beverage.

“The ginger and corn is not a traditional tea, but we thought it made a great pair,” Phillips said.

If you want to taste the flavors of Inaka teas and you live outside Mississippi and Memphis, you might want to order it online for now. Phillips said national availability is a part of a long-term goal.

“In terms of our 10-year plan and what we want to do, the hope is to get them nationwide in natural, organic grocery stores,” Phillips said. “That’s our primary objective.”