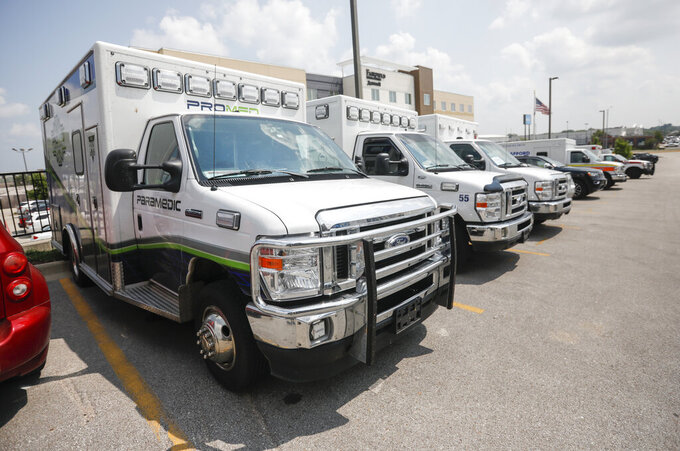 Andrew Jansen, ASSOCIATED PRESS
Ambulance crews unload equipment at the DoubleTree Hotel on Friday, July 23, 2021, in Springfield, Mo. The crews are part of a medical team that was sent to Springfield to help transport COVID-19 patients in the area. (Andrew Jansen/The Springfield News-Leader via AP)

The attorney general in Missouri has sued in an effort to halt a mask mandate that took effect Monday in the St. Louis area amid a rise in COVID-19 cases that are burdening a growing number of hospitals around the state.

The mandate, one of the first to be reinstated in the country, requires everyone age 5 or older to wear masks in indoor public places and on public transportation in St. Louis city and St. Louis County even if they are vaccinated. Wearing masks outdoors is strongly encouraged, especially in group settings.

But the lawsuit said the mandates are “arbitrary and capricious because they require vaccinated individuals to wear masks, despite the CDC guidance that this is not necessary." It also questions mandating children to wear masks in school, noting they are less likely to become seriously ill.

“This continued government overreach is unacceptable and unconstitutional, especially in the face of a widely available vaccine," Missouri Attorney General Eric Schmitt said in a news release.

St. Louis Mayor Tishaura Jones said Schmitt, who is seeking the GOP nomination for U.S. Senate, would not be successful in his legal challenge. She noted that he filed an unsuccessful lawsuit last year against the Chinese government over the coronavirus, alleging that nation’s officials are to blame for the pandemic.

“I wish that he would put more of his attention toward serving the people of the state of Missouri,” she said at a news conference, “and holding our health and safety paramount instead of filing frivolous lawsuits that waste taxpayer dollars.”

Schmitt is just one of several Republicans to push back against the mandate. Gov. Mike Parson said in a tweet Monday that requiring everyone to wear masks “reduce the incentive of getting the vaccine and undermine its integrity.” And St. Louis County Councilman Tim Fitch, meanwhile, said St. Louis County Executive Sam Page was wrong to act without the support of the county commission.

Page, a Democrat, was critical of what he described as “creating distractions for political gain.”

“As some passionate supporters of the previous president hold on tight to bombast and misinformation, we are laser focused on protecting the health and welfare of people in our communities,” he said.

He acknowledged at a news conference that the the mandate “may feel like a punishment" for those who are vaccinated.

But he added: “While the vaccination can protect against serious illness, it can’t protect you from being infected with COVID-19 and passing it onto someone else, someone who may be more vulnerable.”

The decision to impose the mandate comes as both of Missouri’s urban areas see a big uptick in coronavirus hospitalizations that began in rural parts of the state, especially the southwest part of the state, where vaccination rates remain low.

One of the unvaccinated was 31-year-old Daryl Barker of Branson. He came down with the delta variant in early July and has been hospitalized 17 days. With southwestern Missouri hospitals too full, he was transferred to Lake Regional Hospital in Osage Beach, where he is slowly recovering after becoming critically ill.

On Monday, Barker’s wife, Billie, used a dry erase marker to write “I love you” backwards on the window of the intensive care unit so he could read it.

Dr. Harbaksh Sangha, chief medical officer at Lake Regional, told The Associated Press that the difference between this outbreak and the winter is that patients are younger and sicker, with an illness that progresses much faster.

“The younger population who are not vaccinated, they become very sick and the mortality in that population is high, too, this time around,” he said.

Since July 1, the hospital has admitted 70 patients with the virus. Twenty-two have died. The two hospitals in the Springfield area also reported an increase in COVID-19 deaths over the weekend.

Erik Frederick, chief administrative officer of Mercy Springfield, where 12 died, tweeted that “most of this could be prevented" unlike last year. “That," he wrote, “adds an extra layer of anguish.”

Just 47.2% of Missouri residents have received at least the first dose of the vaccine, which is far below the national rate of 56.8%, state and federal data shows.

Elsewhere in the state, Whiteman Air Force Base reinstated its mask mandate Monday, the Harry S. Truman Library & Museum in the Kansas City area said it was closing and Truman Medical Center/University Health announced that it will require all workers to be vaccinated.

Dr. Barbara Pahud, an infectious disease physician and researcher at Children’s Mercy Hospital in Kansas City, said the hospital is at capacity. She blamed COVID-19 and a rise in other respiratory illnesses that have emerged as mask mandates lifted.

“The world is open again, and that means infectious diseases, not just COVID, are circulating,” she said during a University of Kansas Health System briefing.

This story has been corrected to correct the wording from the lawsuit.