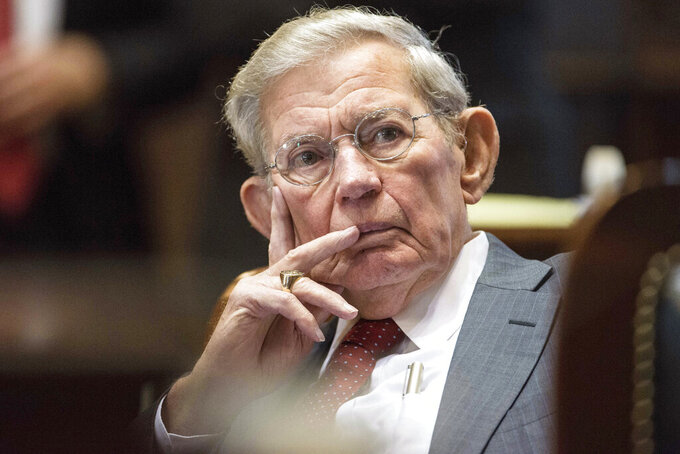 Leatherman's staff notified a handful of lawmakers that the 90-year-old Florence Republican was recently hospitalized after experiencing severe abdominal pain, according to a GOP senator.

The legislator spoke to The Associated Press on Thursday on the condition of anonymity, because he was not authorized to speak publicly on Leatherman's health.

During surgery to remove parts of Leatherman's intestine, physicians discovered an “advanced and aggressive” cancer, the lawmaker said. Afterward, they discharged Leatherman to enter hospice care at his home in Florence, about 80 miles (130 kilometers) east of Columbia.

In his 11th term, Leatherman is among the longest-serving lawmakers in South Carolina's Legislature. First elected to the Senate in 1980 as a Democrat, Leatherman unsuccessfully ran for governor several years later before switching parties in the 1990s, a move taken by a number of Democratic lawmakers, as Republicans gained dozens of seats in Congress.

In a state where the governor has less control, Leatherman has long been considered South Carolina's most powerful politician for his ability to wield control over the state's budget as chair of the Senate Finance Committee. Additionally, he also sits on a number of fiscal oversight boards, including the State Fiscal Accountability Authority and the Joint Bond Review Committee. A new port terminal in Charleston bears his name.

Leatherman also has played a key role in building up the state's business economy, including a massive tax incentive package that helped lure Boeing to the state. The longtime lawmaker has fielded criticism for the amounts of state funding directed toward his home district, as well as millions in state contracts given to the concrete company he founded, and from which he still draws a salary.

In 2019, Leatherman reflected on the continuity of the chamber in which he's sat for more than four decades.

“This state is steeped in tradition," he said. “We don’t change often.”