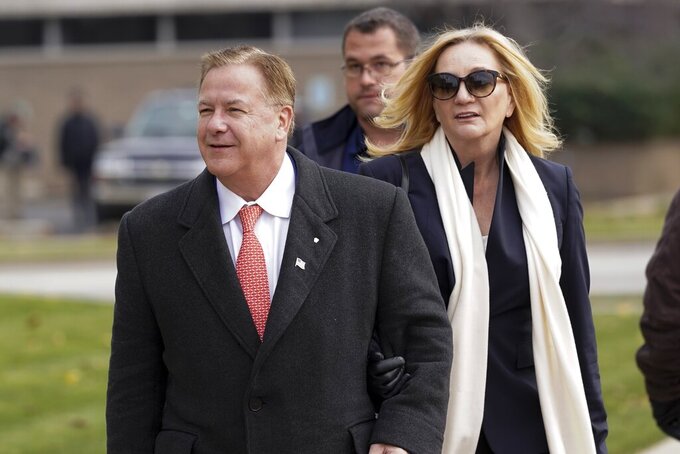 Paul Sancya, ASSOCIATED PRESS
FILE - In this Nov. 16, 2021, file photo, Mark McCloskey, a Republican candidate for U.S. Senate in Missouri, and his wife, Patricia McCloskey, walk outside the Kenosha County Courthouse, in Kenosha, Wis. The Missouri Supreme Court denied a request by U.S. Senate candidate Mark McCloskey and his wife to give free legal advice to a conservative activist group as a condition of their probation, but McCloskey said Thursday, May 19, 2022 he'll try to find another right-wing organization to represent. (AP Photo/Paul Sancya, File)

The Missouri Supreme Court denied a request by U.S. Senate candidate Mark McCloskey and his wife to give free legal advice to a conservative activist group as a condition of their professional probation, but McCloskey said Thursday he'll try to find another right-wing organization to represent.

Mark and Patricia McCloskey of St. Louis were placed on probation as lawyers in February. The decision stemmed from their actions in June 2020 when they raised guns at racial injustice protesters who ventured near their home. Under terms of the probation, the couple can continue to practice law.

“If Project Veritas doesn't meet the standard then I don't know what does because they pursue the interests that ordinary people can't afford to pursue," McCloskey said. He added that he believes that the Missouri Supreme Court “will continue to find an excuse to not allow me to represent any conservative entities,” but he plans to try again anyway.

“I'm going to look to see if there's some good anti-critical race theory community service organizations I can work for, and we'll see what they say about that," McCloskey said.

Mark McCloskey is among several Republican candidates running for the U.S. Senate in the August primary.

He has said he and his wife felt threatened by demonstrators who walked onto their private street during global protests that followed the death of George Floyd in Minneapolis. Mark McCloskey emerged from his home with an AR-15-style rifle, and Patricia McCloskey waved a semi-automatic pistol. No shots were fired.

The pair received national attention after the confrontation, including from then-President Donald Trump.

They pleaded guilty to misdemeanors for the gun-waving incident and were fined. Republican Gov. Mike Parsons pardoned them in August.