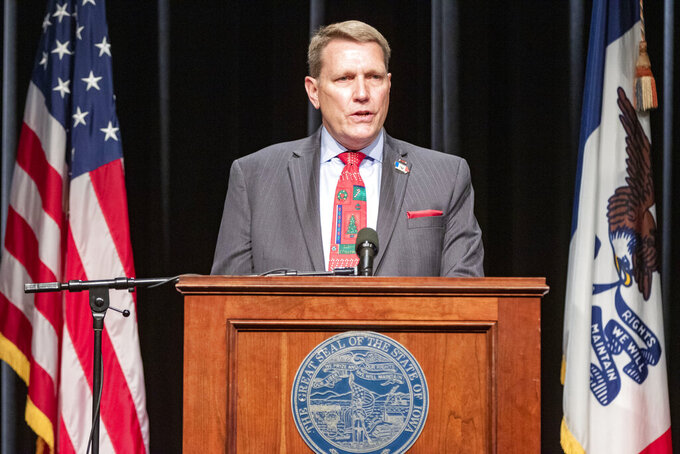 Zach Boyden-Holmes, ASSOCIATED PRESS
Timon Oujiri, Commandant of the Iowa Veterans Home speaks during a news conference Iowa's response to the COVID-19 pandemic in Johnston, Iowa, on Tuesday, Dec. 22, 2020. Iowa Gov. Kim Reynolds fired Oujiri, the leader of Iowa’s state-run nursing home for veterans in May, after learning he had been overpaid by $90,000 over a nearly two-year period, a state audit reported Thursday, July 29, 2021. (Zach Boyden-Holmes/The Des Moines Register via AP)

IOWA CITY, Iowa (AP) — Gov. Kim Reynolds fired the leader of Iowa’s state-run nursing home for veterans in May after learning he had been overpaid by $90,000 over a nearly two-year period, a state audit reported Thursday.

Iowa Veterans Home Commandant Timon Oujiri told governor's office representatives in May that he was long aware of payroll errors that improperly boosted his salary by nearly $950 per week but that he kept receiving the excess pay, the report said.

Oujiri, 63, said he noticed the overpayments shortly after they began in July 2019 but did nothing to resolve the issue, the report said. By the summer of 2020, he said he “definitely noticed” he was still being overpaid but was “too embarrassed” to report the problem by that point, it said.

The governor fired Oujiri, who had been commandant since 2017, the next day and her office reported the financial irregularities to the state auditor.

Reynolds’ spokesman, Pat Garrett, said Thursday that the governor’s office was working with the attorney general’s office to recover any overpayments Oujiri received during his employment.

The report issued by State Auditor Rob Sand said that Oujiri received $90,000 in excess salary payments and that the state incurred another $15,000 in improper retirement and insurance benefits payments for him from July 2019 through April.

The report shed light on what had been a surprise and unexplained firing.

Reynolds appeared with Oujiri at a news conference in December to praise the “outstanding job” he and his staff had done running the veterans home, which is Iowa's largest nursing home, during the coronavirus pandemic. In May, Garrett told reporters that Oujiri had been abruptly relieved of his duties as commandant, but he didn't say why.

State officials refused to pay Oujiri $11,625 for unused vacation that he was owed when he was fired and credited that amount as a partial repayment. That leaves nearly $94,000 in improper disbursements, including $14,000 in retirement account contributions that the Iowa Veterans Home is trying to recover, the audit found.

Department of Administrative Services employees identified the excess payments to Oujiri in April while reviewing payroll information for accuracy before switching to a new system.

They found that the problems began in July 2019, when salaried department directors, elected officials, and board members were supposed to change the defaults on their timesheets from 56 hours to 40 hours per week.

While DAS officials sent an email to state agencies instructing them of the change, Iowa Veterans Home payroll assistants reported that they didn't recall receiving it and the email wasn’t sent to Oujiri, the report said.

The state changed Oujiri’s default hours to 40, but Iowa Veterans Home staff responsible for entering his hours in the system overrode the change every pay period and added in 56, the report said.

Oujiri was the only person affected by the payroll change at the Iowa Veterans Home, and the audit found that he was the only state official who received an unauthorized increase in pay.

Oujiri has not responded to messages seeking comment since May and he declined to speak with auditors and Iowa Division of Criminal Investigation agents looking into the matter, according to the report.

Sand sent his report to county prosecutors in Des Moines and Marshalltown, where the veterans home is located. So far, Oujiri has not been charged.

On Monday, the governor appointed former Marine Corps official Matthew Peterson as the new commandant of the home, which houses more than 500 veterans and spouses and has 900 employees.