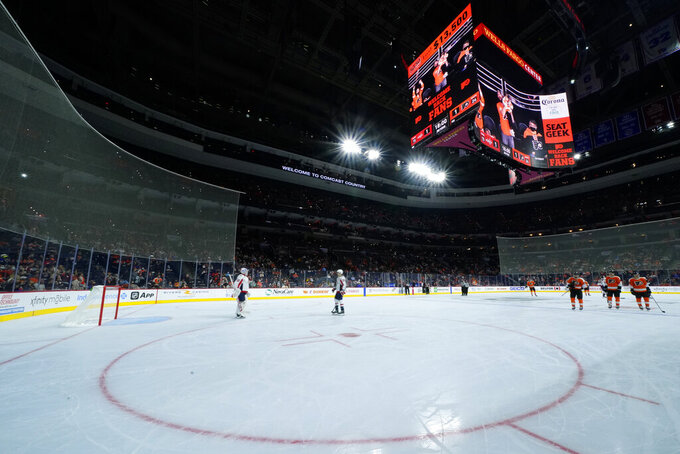 Matt Slocum, ASSOCIATED PRESS
Players skate off the ice after a power outage during the second period of a preseason NHL hockey game between the Philadelphia Flyers and the Washington Capitals, Saturday, Oct. 2, 2021, in Philadelphia. (AP Photo/Matt Slocum)

In a series of tweets Saturday, Lehner said he knows “many” teams that give sedatives and anxiety pills to players without a doctor’s prescription. He referenced the Flyers and Vigneault and claimed to have proof. Lehner is currently playing for the Vegas Golden Knights.

“As far as the other thing, pushing pills, I don’t need another income,” Vigneault said Monday. “I have no idea where that comes from. I don’t know what else to say. I have no idea.”

The NHL has reached out to Lehner to set up an interview over his claims. Flyers general manager Chuck Fletcher said the team leaves health decisions to doctors, not coaches, and said the team has "no reason to believe any of our players have received improper care.”

Lehner also accused the Buffalo Sabres of mismanaging an ankle injury when he played for them. His comments appeared to be related to the stalemate between Buffalo and star forward Jack Eichel over how to treat a herniated disk. The Sabres did not respond to a message seeking comment.

Lehner said the Golden Knights do not give players those drugs without doctor’s orders. He implied he’s prepared to share more information from around the league.

Lehner also criticized Vigneault’s coaching style, writing on Twitter, “Dinosaur coach treating people robots not human. Fire these dinosaurs. Fire #vigneault first story. I got proof.. try to shake your way out of this one.”

The 60-year-old Vigneault is starting his third season with the Flyers. Vigneault has led the New York Rangers and Vancouver Canucks to the Stanley Cup Final and has won more than 700 games as an NHL coach.

“I consider myself experienced. I’d say with experience, you become a dinosaur, maybe,” he said. “I do know that I’ve been coaching a few years and I am tough, I am demanding. I care about players. I’ve wanted their best through the years. Probably, there are some guys that have liked me, some guys a little bit less. But I’ve done it with the best intentions, with respect.”