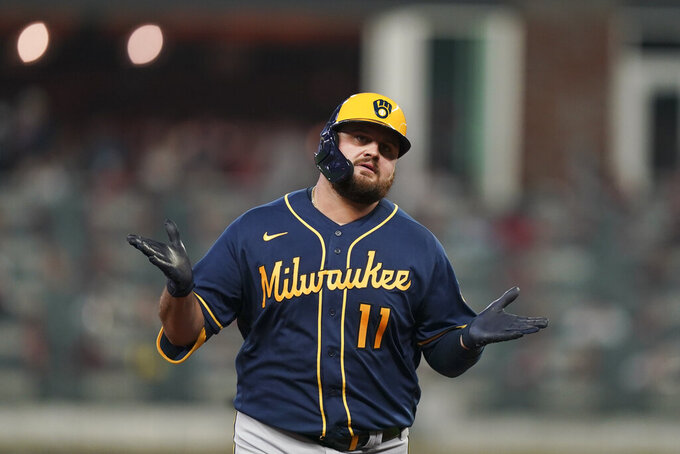 ATLANTA (AP) — At least the Milwaukee Brewers came out swinging.

Even if Christian Yelich went down looking at the end.

Milwaukee was 0 for 20 with runners in scoring position during the NL Division Series until RBI singles by Omar Narváez and Lorenzo Cain produced a 2-0 advantage against Atlanta in Game 4.

But after snapping a 22-inning scoreless drought, the Brewers blew a pair of two-run leads Tuesday and were eliminated when All-Star closer Josh Hader gave up the decisive homer to Freddie Freeman in a 5-4 loss to the Braves.

There weren’t many highlights in October, and the Brewers head into the offseason still seeking their first championship. They haven’t been to the World Series since 1982, despite making the playoffs in each of the last four years.

“There’s a lot of things we can be proud of from this year and try and carry into next year," pitcher Brandon Woodruff said. “But you know what? The goal never changes. We still believe we can win the World Series and make it there. It’s just all about trying to do it."

Hader, who converted 34 of 35 save chances during the regular season, was asked to keep the score 4-all in the eighth inning. He struck out the first two batters he faced before Freeman, the 2020 NL MVP, took him deep to put Milwaukee in a 5-4 hole.

That essentially ended it.

“He had to pitch in the game, and it was the right part of the lineup for him to pitch to,” manager Craig Counsell said. “And it was our best against their best. And then you’re never going to — I don’t think you regret having that situation. It’s how it works. That’s how the game works. That’s how it’s supposed to work.”

Yelich took a called third strike for the final out with a runner on first against Braves closer Will Smith, who saved his third straight game in the best-of-five playoff to help the Braves advance to the NL Championship Series for the second consecutive year.

For Milwaukee, which won 95 games during the regular season and easily took the NL Central title, the winter will come with plenty of second-guessing.

“Obviously, pretty tough," Woodruff said. “We’ve got a really good team. And we knew that it was going to be a challenge coming into the series, just with the way that they can swing the bat and pitch the ball. And their defense is really good. But it just felt like it’s a tough way to end the year. We felt we were a special group. It’s going to hurt for a while, but we’ll get over it and move on to next year."

The Brewers took a 4-2 lead in the fifth on Rowdy Tellez’s second two-run homer of the series, a 448-foot shot to center field, but the Braves came back to tie it in the bottom half on Joc Pederson’s RBI groundout and Travis d’Arnaud’s run-scoring single.

“The playoffs are all about momentum," Tellez said. “When you can make a good play, swing the bat well, throw a good pitch, have a good inning, it shifts momentum — especially when you’re on the road."

Milwaukee starter Eric Lauer, making his first career postseason appearance, breezed through the first three innings before running into trouble in the fourth. The left-hander gave up two runs and four hits in 3 2/3 innings and was removed after hitting Guillermo Heredia with a pitch.

Atlanta tied it at 2-all in the fourth against Hunter Strickland on pinch-hitter Eddie Rosario’s two-run single.

After there was no scoring in the sixth and seventh, it came down to Hader, a gas-throwing left-hander, facing Freeman, a left-handed-hitting slugger. Hader led NL relievers with 102 strikeouts in 58 2/3 innings and was handed his only blown save on July 7 at the New York Mets. He gave up no runs in his last 21 appearances and saved Game 1 in Milwaukee.

Freeman's drive was the first homer Hader allowed to a left-handed hitter this year.

The Brewers will head into the winter wondering what might have been.

“I think, look, in the moment right now, we’re all really disappointed,” Counsell said. “And it’s hard to get past the disappointment right now sitting here right now. It just is. But I think in the end, we had big goals. We didn’t quite get there. But you win 95 games, it's a special group. And they did accomplish some special things. That’s what we talked about a little bit.”