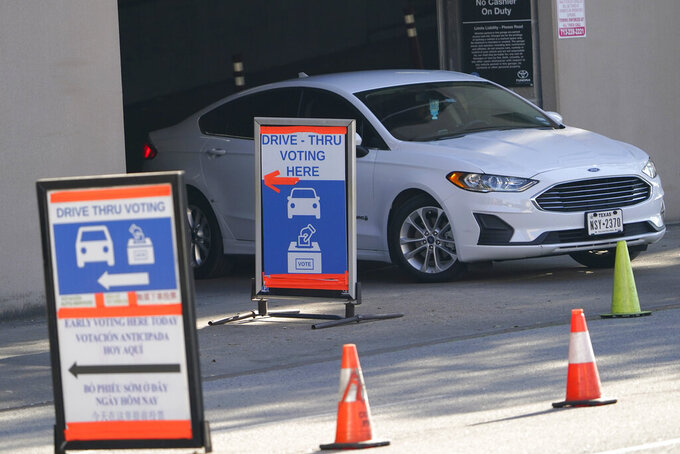 A monthslong campaign by the Republican Party, fueled in part by the false narrative of widespread fraud in last year's presidential election, has led to a wave of new voting laws that will tighten access to the ballot for millions of Americans.

The restrictions especially target voting methods that have been rising in popularity across the country, erecting hurdles to mail balloting and early voting that saw explosive growth during the pandemic. More than 40% of all voters last fall cast mail ballots, a record.

Texas is the latest state to crack down, after the Republican-controlled Legislature passed a bill Tuesday taking aim at Democratic-leaning counties that have sought to expand access to the ballot.

“Regardless of motives, these bills hurt voters,” said Isabel Longoria, the election administrator of Harris County, which includes Houston. “Voters are going to feel this the next time they go vote, and that’s what I’m most worried about.”

Republican lawmakers and their allies say the new laws are meant to ensure election integrity, but Democrats and voting rights activists say they instead will end up disenfranchising voters, especially young people and minorities. In Texas, the bill prompted Democratic lawmakers to flee to the nation’s capital to prevent a legislative quorum, a protest that ended when a handful of lawmakers returned after more than a month away from home.

The Texas bill, expected to be signed soon by Republican Gov. Greg Abbott, follows similar legislation this year in Arizona, Florida, Georgia, Iowa and some other GOP-controlled states. Restrictions also are being pushed in Ohio, where Republicans control the Legislature and governor’s office.

Among the most consistent targets of Republican lawmakers this year have been mail ballots and early in-person voting, after many states expanded those options to make voting safer during the coronavirus outbreak.

Roughly a quarter of all voters cast mail ballots in 2016 and 2018. That jumped to just over 43% in 2020, according to a recent report by the U.S. Election Assistance Commission. It was the first time in the history of the survey that a majority of voters did not cast their ballots in person on Election Day.

Almost 13 million people voted by mail in the November election in states that have new legislation that restricts mail voting procedures, according to the report.

Some of the more contentious aspects of the Texas bill are measures banning 24-hour polling places and drive-thru voting. Those options were used successfully last year, especially in Houston, which is heavily Democratic and has a significant number of Black and Latino voters. The legislation also makes it a felony for a local election official to send unsolicited mail ballot applications and bans the use of drop boxes for mail ballots.

Harlan Williams, an instructional designer who voted at a drive-thru center in the last presidential election, described the process as fast and well-organized.

“It really just doesn’t make any sense to take it away from us,” he said. “I think it’s clearly voter suppression. It’s a way for a party that’s losing influence and power to try and stay in power.”

Texas Republicans defend the law as a way to ensure that only eligible voters cast ballots, even though there has been no evidence of widespread fraud there or in any other state. They also say the law takes steps to help voters — for example, allowing those who cast a mail ballot to fix mistakes rather than having it automatically rejected as well as a measure that would have polling places open for at least an extra hour during early voting periods.

“The sorts of provisions that we're talking about have never been demonstrated in any way to suppress the vote, to prevent people from voting or even necessarily to make it hard to vote,” said Jason Snead, executive director of Honest Elections Project, a conservative advocacy group.

“So a lot of what these laws do, when you look at the actual particular provisions, they're expanding early voting opportunities, they're preserving, where it exists already, no-excuse absentee voting. They're making it, in some respects, easier to vote. They're also just working to provide for the security and confidence that voters want,” he said.

Republicans have tightened voting rules as former President Donald Trump and his allies continue to baselessly claim his loss was due to widespread fraud. Critics of the new GOP laws have said the concerns are based on conspiracy theories and should not be used to restrict voting access.

“We’re starting from the point of view, it’s not broke, why are we trying to change it?” said Michigan Secretary of State Jocelyn Benson, a Democrat.

Many of the changes this year would have faced federal scrutiny before being implemented had the U.S. Supreme Court not weakened a core provision of the Voting Rights Act in 2013. Under that provision, Arizona, Georgia, Texas and other states and counties with a history of discrimination would have had to submit their proposed legislation to either the federal court for the District of Columbia or the Justice Department.

Critics of the new restrictions have for months urged Democrats in Congress to pass federal legislation to establish minimum voting standards to neutralize some of the new laws. But Democrats have been unable to unite behind a strategy that could overcome near-unanimous opposition from Senate Republicans.

With most of the Republican restrictions already in place and the midterm elections approaching, the Democratic National Committee has pledged $25 million for voter education, registration and other efforts as a way to combat the new laws.

Democrats also have countered with laws that broaden voting access in states they control politically, taking steps such as expanding drop-off locations for mailed ballots and making it easier to register and vote on college campuses.

Few states will have a brighter spotlight next year than Georgia, which has emerged as one of the nation’s hottest political battlegrounds. Republicans this year passed restrictions around absentee balloting and increased legislative oversight of election officials.

One provision in Georgia’s new law would reduce the number of ballot drop boxes in metro Atlanta from 94 last year to no more than 23 for future elections, based on a formula of one drop box per 100,000 registered voters. Georgia Republicans said they were focused on making sure drop boxes were written into the law, available for future elections with strong security measures in place.

Democrats see something more sinister at work, after President Joe Biden beat Trump by a little more than 12,000 votes in the state, largely on the strength of Black and left-leaning voters in Atlanta and some of its suburbs.

The state’s new rules also shorten the amount of time voters can request an absentee ballot, from 180 days to 78, and add an ID requirement for requesting and returning mail ballots.

Florida Republicans also established new rules around ballot drop boxes, requiring them to be guarded and only available when election offices and early voting sites are open. Election supervisors could face a $25,000 fine if a ballot drop box is accessible outside early voting hours or is left unsupervised.

Arizona Republicans passed a law that purges infrequent voters from a list of those who automatically get a mail ballot each election.

In Iowa, voters will have less time to vote early, after Republicans narrowed the window from 29 days to 20. The state’s new election law also requires most mail ballots to be received by Election Day, as opposed to being postmarked then. County election officials are banned from sending out absentee ballot request forms unless a voter asks for one.

“It’s going to be harder for people to vote,” said Sylvia Albert, voting and elections director for Common Cause, which advocates for expanded voter access. “It means that states have to put more money and time and energy into educating the voting population in how to go about being able to vote in spite of these burdens.”

Associated Press coverage of voting rights receives support in part from Carnegie Corporation of New York. The AP is solely responsible for this content.