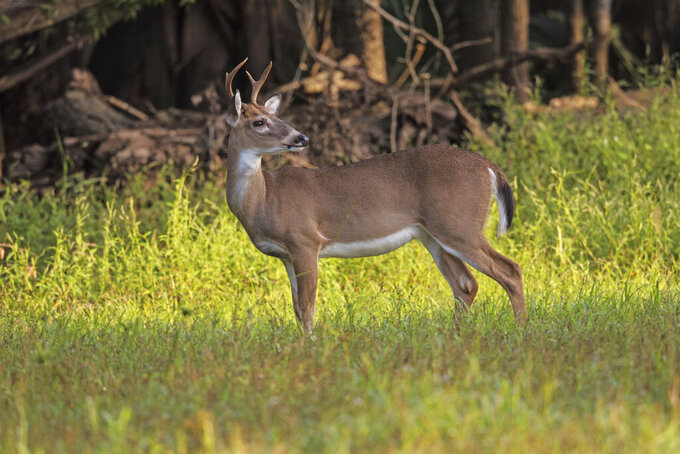 Marcus Constance, ASSOCIATED PRESS
This photo by Marcus Constance and provided by the U.S. Forest Service, shows a white-tailed buck in the Kisatchie National Forest in central Louisiana during December 2020. The Louisiana Department of Wildlife and Fisheries is offering a chance at a gift card for hunters and taxidermists who bring in the heads of mature bucks killed during the 2021-22 hunting season to be tested for chronic wasting disease. The slow but fatal disease has not been found in Louisiana but has shown up in all three adjacent states – Texas, Arkansas and Mississippi. (Marcus Constance/U.S. Forest Service via AP)

NEW ORLEANS (AP) — Deer hunters across Louisiana can qualify for a $1,000 drawing by having the head of a mature white-tailed buck tested for a slow but always fatal illness called chronic wasting disease.

Taxidermists in the state can do the same for a chance in a $500 drawing — with permission from the hunter who harvested the buck, the Louisiana Department of Wildlife and Fisheries said in a news release.

Chronic wasting disease is always fatal in deer, elk or moose, but it can take 16 months to four years for the first symptoms to show up. The Centers for Disease Control and Prevention says scientists don't know whether it can infect people, but the agency recommends against eating venison from infected animals.

The disease has not yet been found in Louisiana. But all three neighboring states — Texas, Arkansas and Mississippi — are among at least 26 where it has been found.

The tests are free until a region meets its testing quota, said Dr. James LaCour, the state veterinarian.

Heads — with or without antlers and skull cap, but with at least 5 inches (13 centimeters) of neck — can be brought to regional department offices in Hammond, Lafayette, Lake Charles, Minden, Monroe and Pineville, between 8 a.m. and 4:30 p.m.

A new test that uses a sample taken from a nerve in a deer's ear and could even be used on live animals is being field-tested in Montana.

Details about preparing samples for the current test are available on the department's website at https://www.wlf.louisiana.gov/page/cwd-testing.

Details about the drawings are at https://www.wlf.louisiana.gov/page/cwd-contest.

Both drawings will be held March 18. The South Louisiana Branch of the National Deer Association is providing money for the gift cards.

Like mad cow disease and its human counterpart, Creutzfeldt-Jakob disease, chronic wasting disease is believed to be caused by malformed proteins called prions that create holes in an infected animal's brain.

The CDC says scientists have not linked chronic wasting disease infections to consumption of sick deer, elk or moose. However, a Creutzfeldt-Jakob outbreak in Britain in 1992 was linked to eating infected cattle.

The deer disease is spread by contact with infected saliva, blood, urine, feces, food, water, and soil. It can be transmitted from live animals or carcasses. Any deer can be infected, but mature bucks typically have higher infection rates, the department said.