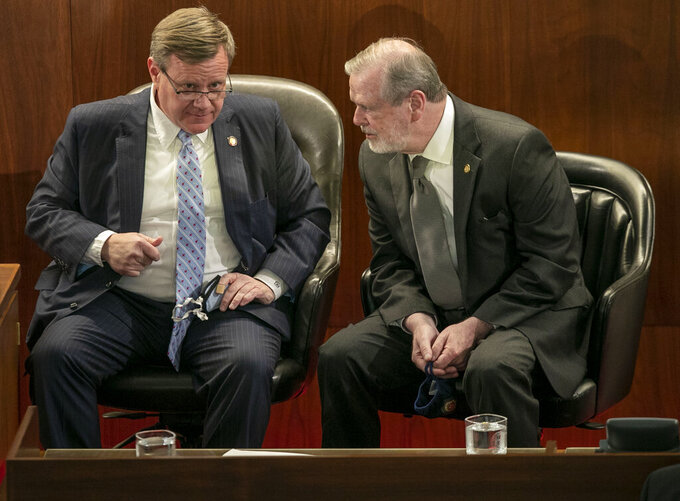 RALEIGH, N.C. (AP) — The North Carolina General Assembly wrapped up on Wednesday internal negotiations towards fashioning a two-year state budget, Republican lawmakers said. Now heavy lifting begins to see if acceptable changes for all can be made so Democratic Gov. Roy Cooper will sign a final proposal.

House Speaker Tim Moore said he and Senate leader Phil Berger completed their meetings Wednesday morning that hammered out remaining differences between the two chambers. Berger's office also confirmed a joint budget offer has been finalized, seven weeks after the House approved its own state government proposal. The Senate approved its competing plan in June.

The fiscal year began July 1, but a later tax collection deadline due to the pandemic and complexity about what to do with a massive amount of surplus state aid and COVID-19 federal funds have contributed to the delay.

Next Republicans will present their negotiated plan to Cooper and his aides. The governor likely will tell Moore and Berger what alterations he needs — on items like taxes, pay raises and education spending — in order to sign the bill into law. If negotiations break down, Republicans could formally vote to pass a final plan of their own and dare Cooper to veto it. Moore told colleagues that any budget votes likely would occur within two weeks.

Moore and Berger have not disclosed details of the legislative agreement. Moore has said they want to keep them confidential to promote frank negotiations with the governor.

But Moore said Wednesday he was pleased with what legislative negotiators have agreed to, saying it will mean record spending for transportation, capital and public education, as well as a tax cut package. Both the House and Senate bills included individual and corporate income tax reductions.

“There was nothing in what we talked about that ran counter to the House budget,” Moore told reporters after a House floor session.

Public education spending is likely to be a negotiating obstacle. Cooper said Tuesday he would be lobbying hard to get a final budget that complies with a court-approved plan designed to address inequities for children who fail to get an opportunity for a “sound basic education.” But that plan, in part penned by Cooper's administration, would require $1.7 billion in new spending through mid-2023. House and Senate budget plans proposed spending much less on these “Leandro” items, named for a litigation plaintiff.

Moore also said there are policy prescriptions within the House-Senate budget offer that “I would expect the governor may not immediately embrace."

Cooper expressed optimism Tuesday that there would be enough compromises that he could sign a traditional two-year budget into law — something he's never done since taking office in 2017. Cooper's 2019 budget veto, combined with his insistence that Medicaid expansion be discussed, led to a stalemate with Republicans that never got fully resolved.

“I look forward to the coming days, and that hopefully we can reach a budget agreement,” Cooper told a gubernatorial commission on education funding.

As in 2019, there are enough Democrats in each chamber that could uphold any Cooper veto if they remained united. But several Democrats voted for the initial House or Senate plans this year, increasing the chances for an override on a final budget veto.

Despite a history of wayward Democrats returning to Cooper's fold for override votes, Moore said it was the Republicans who were in a position of strength as negotiations begin because of the bipartisan budget votes in the summer.

“In the event we reach a sticking point ... we feel very confident that we have the votes in the House to to override a (budget) veto should one happen,” Moore said.