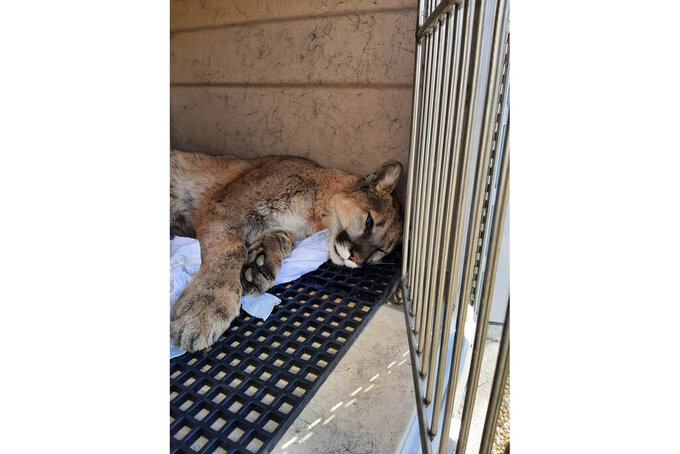 Uncredited, ASSOCIATED PRESS
This photo provided by Clark County shows a 60-pound female mountain lion after it was tranquilized and captured Thursday, April 1, 2021, by Nevada Department of Wildlife game wardens in a west Las Vegas foothills neighborhood. It was released in a remote area of the Spring Mountains. Officials say the cat is believed to be the same one seen several times in recent weeks in Summerlin neighborhoods and golf courses. (Clark County via AP) 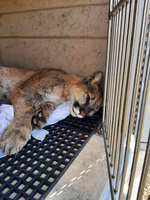 LAS VEGAS (AP) — Authorities say game wardens responding to a report of a mountain lion chased by coyotes in suburban Las Vegas found the cat in a tree, captured it and released it in a remote area.

Nevada Department of Wildlife spokesman Doug Nielsen told the Las Vegas Review-Journal the cougar was found Thursday morning near a golf course and later released in the rugged Spring Mountains.

Clark County spokesman Erik Pappa said the 60-pound female was found up a tree. It was shot with a tranquilizer dart, tagged and taken to a mountain area where Pappa said it was given medication to reverse the tranquilizer effects. Wardens provided video of the release.

Last July, authorities tranquilized and removed a 70-pound female mountain lion from the suburban western foothills near a park and an elementary school.

Wildlife officials say cougars are typically elusive and aren’t frequently seen in urban areas. They are carnivorous and prey on wild deer, small mammals and rodents. They may also attack domestic cats, dogs and other pets.